Objective: We describe a rare case of group G streptococcus (GGS) sepsis complicated by bacterial toxin myopathy.
Case: A 65-year-old man, with a history of infection of his shoulder prosthesis, presented with multiorgan failure and notable myalgia likely caused by toxins. The patient was treated successfully with antibiotics and prosthesis removal.
Conclusion: This case suggests infection by GGS should be considered in a patient presenting with myalgia associated with sepsis.

We present the case of a 65-years old patient hospitalized in February 2018 for fever, alteration of consciousness and arthromyalgia. He had a history of right shoulder replacement after traumatic fracture in 2011 and a diagnosis of persistent prosthesis infection and dislocation since 2015. Prosthesis replacement had been recommended by orthopaedics but had not been carried out.
In 2018, because of high persistent fever and diffuse pain, the patient was admitted to the Emergency Room and then to our Internal Medicine Unit. For some days before hospitalization, he had been taking non-steroidal anti-inflammatory drugs for lumbar pain without improvement.
On physical examination, the patient was obtunded, although responsive to verbal stimuli, and inclined to sleep. He presented normal vital parameters except for tachycardia and fever (BP 120/70 mmHg, HR 120/min, RR 18/min, O2 Sat 93%, temperature 38°C). He complained of diffuse pain, mostly in the limbs, exacerbated by minimal movement and allodynia. Skin inspection demonstrated migratory skin erythema associated with generalized oedema and inflammatory signs on the right shoulder (calor, rubor, tumor, dolor e functio laesa). Neurological examination showed altered mental status and rigor nucalis. The chest and abdominal examination was normal.
Laboratory tests showed a raised inflammatory index (C-reactive protein 37 mg/dl, procalcitonin 13 ng/ml, erythrocyte sedimentation rate 108 mm), creatine phosphokinase elevation (1,828 U/l) and multiorgan failure with renal, liver and lung dysfunction requiring oxygen therapy (serum creatinine 1.55 mg/dl, urea 141 mg/dl, aspartate transaminase 115 U/l, serum cholinesterase 2,935 U/l, international normalized ratio 1.43, serum albumin 2.5 g/dl). Blood gas analysis revealed an increased lactate level (3 mmol/l).
A right shoulder x-ray confirmed prosthesis dislocation (Fig. 1). 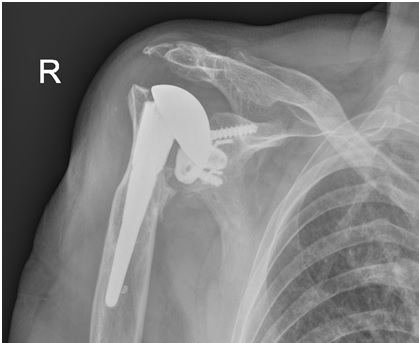 This presentation supported a neurological or a septic cause. Indeed, altered mental status, rigor nucalis and fever can suggest meningitis. Atypical Guillain–Barré syndrome, in which motor deficit is associated with pain in all four limbs, should also be considered. In contrast to typical Guillain–Barré syndrome, the motor deficit is not ascending and there are no deep tendon reflex abnormalities, dysautonomia, or respiratory or cranial nerve involvement. The presentation also indicated sepsis with multiorgan failure associated with myopathy.
In light of the history of right shoulder infection, arthrocentesis of the shoulder and blood cultures were first performed. Simultaneously we started fluid resuscitation and administered wide spectrum empiric antibiotics (ceftriaxone and vancomycin). As we were not able to perform lumbar puncture because of technical difficulties, we adjusted the ceftriaxone dose to cover for meningitis.
The results of blood and synovial fluid cultures showed infection with group G β-haemolytic streptococcus. This finding led us to suspect myalgia as a result of damage by bacterial toxins. Therefore, vancomycin was replaced with clindamycin and immunoglobulin infusion was started.
A PET/CT scan and echocardiography excluded other sources of infection (Fig. 2). 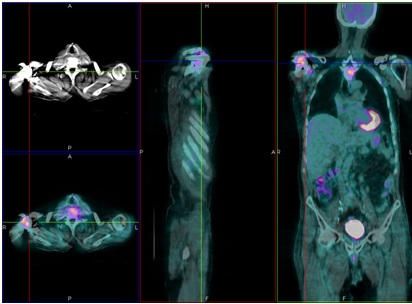 Our patient began to recover after a few days of treatment, showing pain reduction and improvement in cognitive status. Electromyography (EMG) and electroneurography (ENG) showed moderate muscle pain in all four limbs, compatible with the diagnosis of bacterial toxin-induced myopathy. The patient was scheduled for prosthesis removal after his clinical condition had stabilized.

Toxic syndrome due to group G streptococci (GGS) is rare and few cases have been described in the literature[1,2]. Diagnosis is based on clinical evidence, the inflammatory index and culture results.
GGS react with Lancefield group G typing serum and, similar to the well-known Streptococcus pyogenes (group A streptococcus, GAS), form large colonies on sheep blood agar, typically surrounded by a zone of β-haemolysis. GGS and GAS also have comparable virulence, sharing, for example, similar pyrogenic exotoxins implicated in streptococcal toxic shock[3].
Streptococcal myositis is an unusual but particularly fulminant infection attributed to GAS; because GGS shares many similarities with GAS, it is may also be the aetiological agent in myositis[2].
Exotoxins released by GGS act as superantigens activating the immune system by bypassing the usual antigen-mediated immune response sequence, resulting in the release of large quantities of inflammatory cytokines capable of mediating shock and tissue injury[1,4]. Moreover, exotoxins induce human mononuclear cells to synthetize TNF-α, which could be the mediator of fever, shock and tissue injury[4].
GGS, part of the normal commensal flora of the human upper airway, has been implicated in a wide range of human infections including septic arthritis. Consequently, the presence of a prosthetic joint is a predisposing factor for this condition. Non-steroid anti-inflammatory drugs, used also by our patient, are thought to predispose to severe forms of streptococcal infection by enhancing cytokine production induced by the exotoxins[1,4].
Our patient did not have streptococcal toxic shock, as demonstrated by his stable blood pressure which remained within the normal range. However, signs of soft tissue infection (swelling and erythema) were present. When such manifestations occur in GAS toxic-shock syndrome, a high percentage of cases (70%) progress to myositis[4]. Nevertheless, data on GGS infection are lacking.
This case is of interest because it suggests the differential diagnosis of meningitis, Guillain–Barré syndrome or bacterial toxin myopathy.
As previously mentioned, we decided not to perform a lumbar puncture because the patient was compromised and in such a septic condition, the risks of procedure-induced infection are high. Moreover, our patient was already receiving proper antibiotic coverage.
We decided to perform EMG/ENG, which confirmed the hypothesis of peripheral muscular involvement. This, together with the improvement in the septic condition, despite the persistence of rigor nucalis and myalgias, retrospectively excluded the diagnosis of meningitis. Additionally, the EMG/ENG excluded atypical Guillain–Barré syndrome because no signs of active denervation were found.
Finally, in light of the septic shock with cutaneous erythema, generalized oedema, myalgia and leg and arm hyposthenia, we considered streptococcus toxin damage might be the cause of this clinical presentation. EMG/ENG confirmed this hypothesis, showing muscle disorders compatible with the diagnosis of polymyositis.
Following final diagnosis, the pharmacological approach was based mainly on antibiotic treatment: we used two drugs with a synergic effect: a β-lactam (ceftriaxone) which inhibits bacterial wall synthesis, and clindamycin which suppress bacterial toxin synthesis and penicillin-binding protein synthesis[4].
Although successful treatment of GGS that included immunoglobulin therapy has been reported in the literature[3], immunoglobulin infusion is still controversial[1]. A clear mechanism of action has not been shown and many hypotheses are described in the literature: streptococcal toxin neutralization, B lymphocyte proliferation inhibition, and TNF-α and IL-6 inhibition.
In this case we chose to administer immunoglobulin because of the severe clinical condition of the patient.