We present the case of a 22-year-old man who presented with cough, haemoptysis and fever of 3 days’ duration. A teratoma had been diagnosed 2 years previously. Physical examination was unremarkable but laboratory tests showed anaemia, neutrophilic leucocytosis and an increase in C-reactive protein. Chest CT revealed a teratoma of the anterior mediastinum with post-obstructive pneumonitis suggestive of tumour rupture. Antibiotic treatment resulted in a good clinical outcome. The patient was submitted to a left upper lobectomy and pathological examination revealed a mature teratoma. Teratomas are germ cell tumours that are usually asymptomatic and their rupture is a rare event.

A 22-year-old man presented to our Emergency Department with cough, haemoptysis and fever of 3 days’ duration. A teratoma had been diagnosed 2 years previously after a routine chest x-ray and chest CT. At admission, the patient’s tympanic temperature was 37.8ºC, he was tachycardic (116 beats per minute, rhythmic), eupnoeic and his blood pressure was 95/55 mm Hg. Chest examination including pulmonary auscultation, was unremarkable. Laboratory tests showed normocytic normochromic anaemia (haemoglobin 12 g/dl, mean cell volume 82 fl, mean corpuscular haemoglobin 2.05 fmol/cell), neutrophilic leucocytosis (WBC 12.4 109/l, neutrophils 81.6%) and an increased C-reactive protein (8.93 mg/dl). Renal function, liver transaminases, lactate dehydrogenase and coagulation were within the normal reference ranges. The chest x-ray revealed homogeneous hypotransparency in the left lung field (Fig. 1A) and a chest CT scan (Fig. 1B) performed afterwards documented a marked increase in the lesion compared with evaluation in the previous year, measuring 8.7×8.7×12.1 cm. 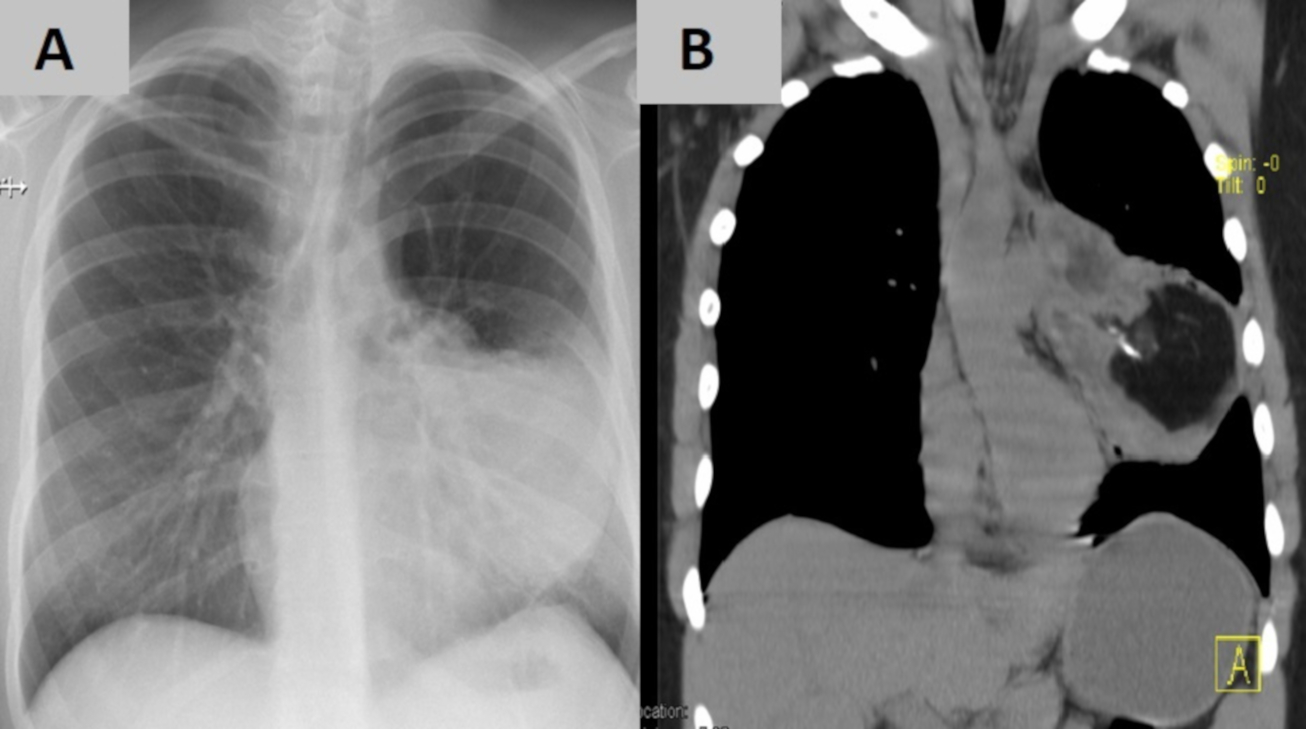 Figure 1. (A) Admission x-ray with homogeneous hypotransparency in the left lung field. (B) Thorax CT showing a heterogeneous mass with extensive lipomatous content and foci of calcium density, compatible with a teratoma of the anterior mediastinum

The mass was heterogeneous with extensive lipomatous content and foci of calcium density surrounded by a cystic component. The lesion was compatible with a teratoma of the anterior mediastinum.
An adjacent post-obstructive pneumonitis and signs compatible with bilateral alveolar haemorrhage were also evident, suggesting that the tumour had ruptured. The patient was started on antibiotic treatment with amoxicillin plus clavulanic acid and azithromycin. The blood cultures and pneumococcal and legionella urinary antigen tests were all negative. A good clinical and laboratory response to antibiotic therapy was observed. After a multidisciplinary discussion, it was decided to submit the patient to an exploratory thoracotomy. A median sternotomy showed almost completely upper left lobe invasion (Fig. 2). Therefore, a left upper lobectomy was performed. The pathological examination revealed a mature, partially cystic teratoma (Fig. 3) with bronchial erosion and aspects of organizing pneumonia in the non-tumour lung parenchyma. The post-operative phase was uneventful and the patient was discharged from hospital 8 days after surgery. The patient remains asymptomatic at 1 year of follow-up.

Germ cell tumours (GCTs) are neoplasms that have their origin in germ cells and can be benign or malignant. They can be classified by their location: gonadal, when the primary tumour is localized in the testis (or ovaries) or extragonadal, when localized outside these structures. GCTs are also classified by their histology[1] and are called teratomas when they contain tissue from the three types of germinal layers: mesoderm, endoderm and ectoderm[1]. Teratomas can be subdivided into three histological categories: mature teratoma, immature teratoma (presence of neural tubules and/or neural rosettes) and teratoma with a malignant component (germ cell, epithelial or mesenchymal malignancy)[1]. The anterior mediastinum is the most frequent extragonadal location[2]. Mediastinum teratomas are more common in young patients with no sex prevalence differences[1]. They are usually asymptomatic and their rupture is a rare event. The adjacent organ involved can be the lung and bronchial tree (which was the case in the patient reported here), pleura[3], pericardium[4] and great vessels. Different mechanisms have been proposed for spontaneous teratoma rupture including autolysis (tumour glandular enzyme digestion), chemical inflammation, ischaemia, infection and pressure necrosis[5]. Complete mature teratoma excision is considered curative[2] This case report describes a rare form of presentation of a mature teratoma of the mediastinum. Although teratomas are generally asymptomatic, prompt rupture recognition allows adequate and timely treatment.