External jugular vein thrombosis is a rare complication that, when it occurs, is usually secondary to cervical trauma, infection, venous cannulation or malignancy. By contrast, spontaneous external jugular thrombosis is extremely uncommon.
We report the case of a 69-year-old woman presenting to the Emergency Department with a 3 centimetre neck lump, which had suddenly appeared on the same day. She did not have any other relevant symptoms. The patient had not suffered any recent cervical trauma or infection. There was no personal or familial history of thromboembolic disease. Physical examination was normal, apart from the neck mass.
A neck ultrasound revealed a non-occlusive thrombus inside the right external jugular vein.
Usual workup, including a coagulation laboratory profile, autoimmunity and malignancy research, was unremarkable, identifying the thrombosis as idiopathic. Anticoagulation treatment was started, leading to a complete resolution of the thrombus, without recurrence.
The sudden appearance of a painless cervical mass, without any identified triggering factor, is not common. The possibility of a jugular thrombosis should be kept in mind in the differential diagnosis of an isolated neck lump.
In this case, point-of-care ultrasound, which is becoming increasingly available in Emergency Departments, contributed to the rapid and accurate diagnosis of the patient.

A 69-year-old woman presented to the Emergency Department with a slightly painful lump in the right cervical region that appeared a few hours before her arrival at the hospital. There was no history of cervical trauma, cannulation of the neck vessels, prior hospital admission or previous thromboembolic or oncological diseases. She did not take any medication and she did not have any known chronic illness.
The patient did not have symptoms in the otorhinolaryngological, thoracic or abdominal areas. She did not have night sweats or asthenia, neither weight loss nor anorexia, nor fever, nor had she undergone recent travel.
Physical examination of the neck revealed a 3 x 2.5 centimetre soft, round, well-circumscribed, non-pulsatile lump, with no signs of inflammation (Figs. 1 and 2). There was no lymphadenopathy, and neither a palpable goitre nor skin abnormalities. The patient was afebrile and vital signs were normal. Physical examination of the chest, abdomen, lower limbs and central nervous system was unremarkable. 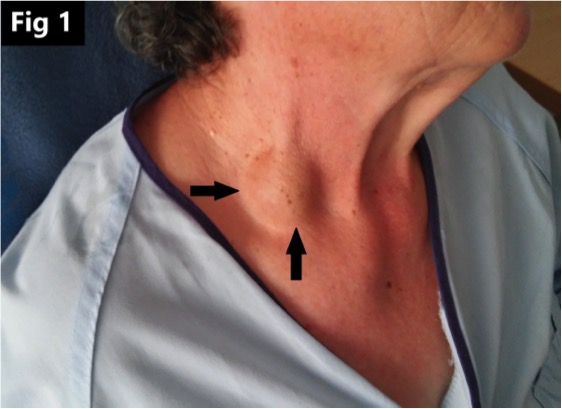 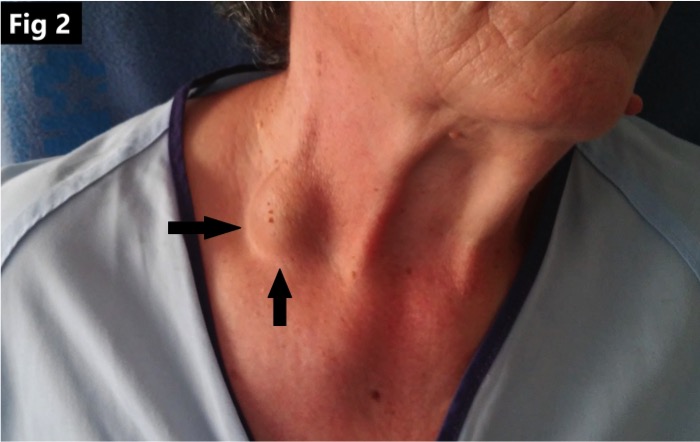 Neck ultrasound (Fig. 3) reported a non-occlusive thrombus inside the right external jugular vein, which was confirmed by computed tomography (Fig. 4). The internal jugular vein and all other cervical and thoracic structures were normal. 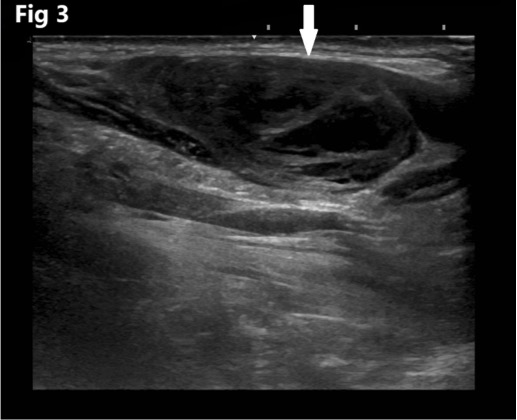 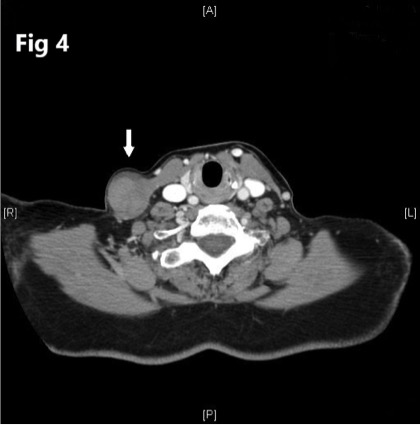 An exhaustive aetiologic study was conducted, including a coagulation laboratory profile, infection, autoimmunity and malignancy research. The results were unremarkable, identifying the thrombosis as idiopathic.
Anticoagulant treatment was started, which led to a progressive improvement. A cervical Doppler ultrasound performed after 6 months of medical treatment confirmed a complete resolution of the thrombus, and anticoagulation was stopped.
A close follow-up was carried out to rule out hidden malignancy, systemic disease or infection, without noteworthy results, except for a monoclonal gammopathy of undetermined significance that remains stable so far.

Idiopathic thrombosis of the external jugular vein is extremely rare[1–3]. The veins of the cervical region have distensible walls and drainage that goes downward with gravity, in contrast with the veins of the lower limbs, which have valves to prevent retrograde flow and blood stasis. These differences explain why thromboembolic disease is far more common in the lower extremities than in the neck vessels[4].
The majority of reported cases of jugular thrombosis feature the internal rather than the external jugular vein[3]. Most of these are caused by trauma, central venous catheterisation, intravenous drug use, infections and extrinsic compression by tumours. Other aetiologies described are thrombophilia, Lemierre’s syndrome, proximal humeral fracture, thoracic outlet syndrome and aneurysms[1,2,4].
Computed tomography used to be the gold standard diagnostic test for vessel thrombosis[1], but recent publications recommend neck ultrasound as the modality of choice[2]. In addition, point-of-care ultrasound, performed by trained physicians, has been shown to be a cheap, accessible, easy-to-learn test that provides an excellent sensitivity and specificity in the diagnosis of deep vein thrombosis, among other conditions[5]. Bedside ultrasound is increasingly available at Emergency, Internal Medicine and Intensive Care Departments, where it has gradually become a usual complement to physical examination[5].
The treatment of choice for external jugular vein thrombosis remains controversial since it depends on the underlying cause and comorbidities[2,4]. There is a high risk of potentially fatal thromboembolic events in patients with internal jugular vein thrombosis, who must receive anticoagulation treatment. However, the risk of embolism is far less clear in patients with external jugular vein thrombosis[2] and the therapeutic approach differs from one case report to another, including options such as anticoagulation[4], surgical removal[3] and even symptomatic conservative treatment[2]. Further studies are needed in order to assess optimal treatment. Currently, management of external jugular vein thrombosis should be made based on the risk factors, comorbidities and preferences of the patient[2].
Patient consent was received for the purposes of this report.