Background: Internuclear ophthalmoplegia (INO) is an eye movement disorder caused by a lesion in the medial longitudinal fasciculus (MLF) located in the midbrain. Adduction paralysis of both eyes and bilateral abduction nystagmus are the main features of INO[1].
Case presentation: A 29-year-old Hispanic woman was admitted to the emergency department complaining of an intense holocranial headache lasting 9 days, associated with nausea and vomiting. She was discharged home with resolution of the headache but persistence of symptoms. However, she subsequently developed horizontal diplopia and gait abnormalities. She was readmitted to hospital because of anomalous eye movements and conjugate gaze palsy, manifested as bilateral INO. Magnetic resonance angiography (MRA) findings were consistent with dissection of the left V4 vertebral artery with multiple brain infarcts in the superior cerebellar artery territory, comprising both MLF tracts.
Conclusions: In young adults, bilateral INO is normally caused by demyelinating disease. In other patients, common causes include trauma, infections and autoimmune diseases with neurological symptoms. Vascular disease is implicated in over a third of cases.

A 29-year-old Hispanic woman presented to the emergency department with a 9-day history of intense holocranial headache associated with nausea and vomiting. She was discharged home with symptomatic treatment after complete resolution of symptoms and exclusion of all neurological causes. However, she subsequently developed horizontal diplopia and gait abnormalities and was readmitted to hospital because of abnormal eye movements and conjugate gaze palsy.
Physical examination was otherwise normal, but the mental status examination showed reduced attention. On cranial nerve examination, abduction was bilaterally limited with a compensatory abduction nystagmus. Pupils were normal. Dysmetria and dysdiadochokinesia were found on the left side of the body.
Increased signal intensity in the right pontomesencephalic junction was observed on T2-FLAIR and diffusion-weighted MRI sequences (Figs. 1 and 2). White matter hyperintensity was also found in the left cerebellar hemisphere; these lesions appeared hypointense on T1 and ADC map sequences, suggestive of infarction. MRA findings were consistent with dissection of the left V4 vertebral artery (Fig. 3). Antiplatelet therapy was initiated with subsequent follow-up in a vascular disease clinic. 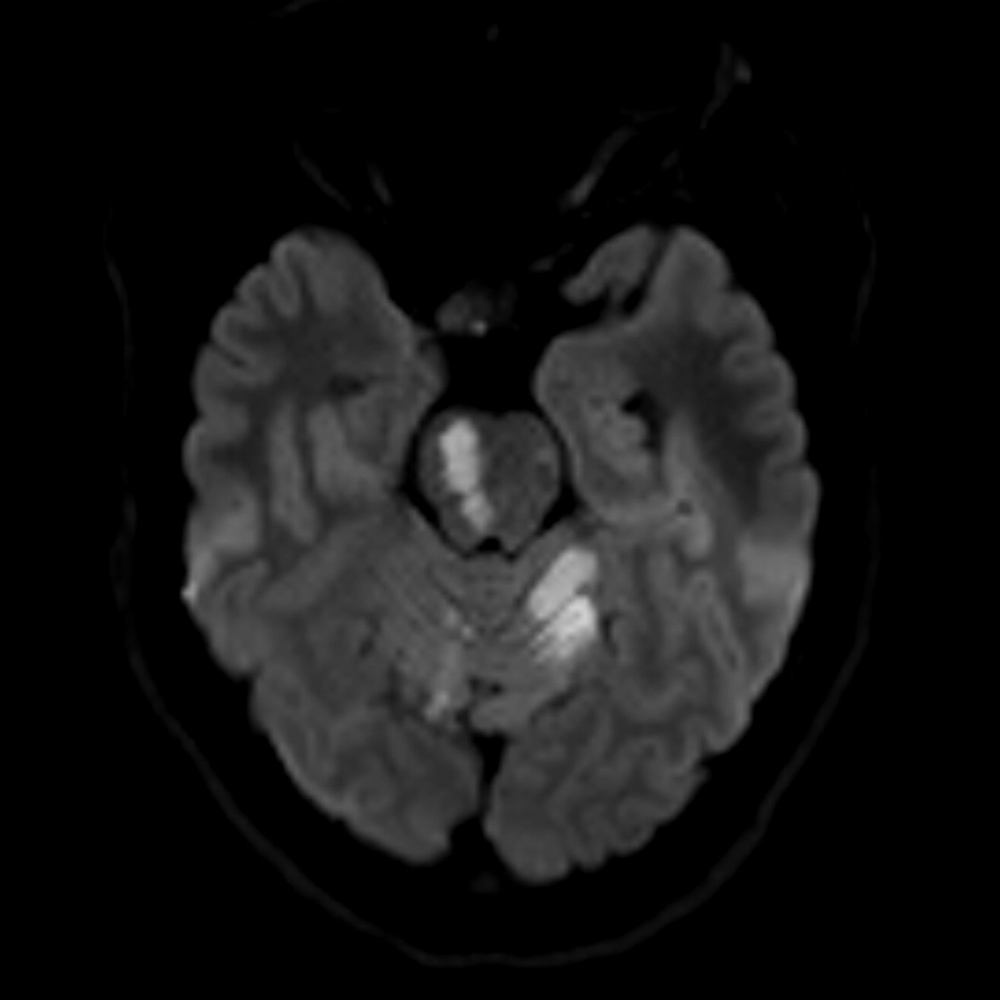 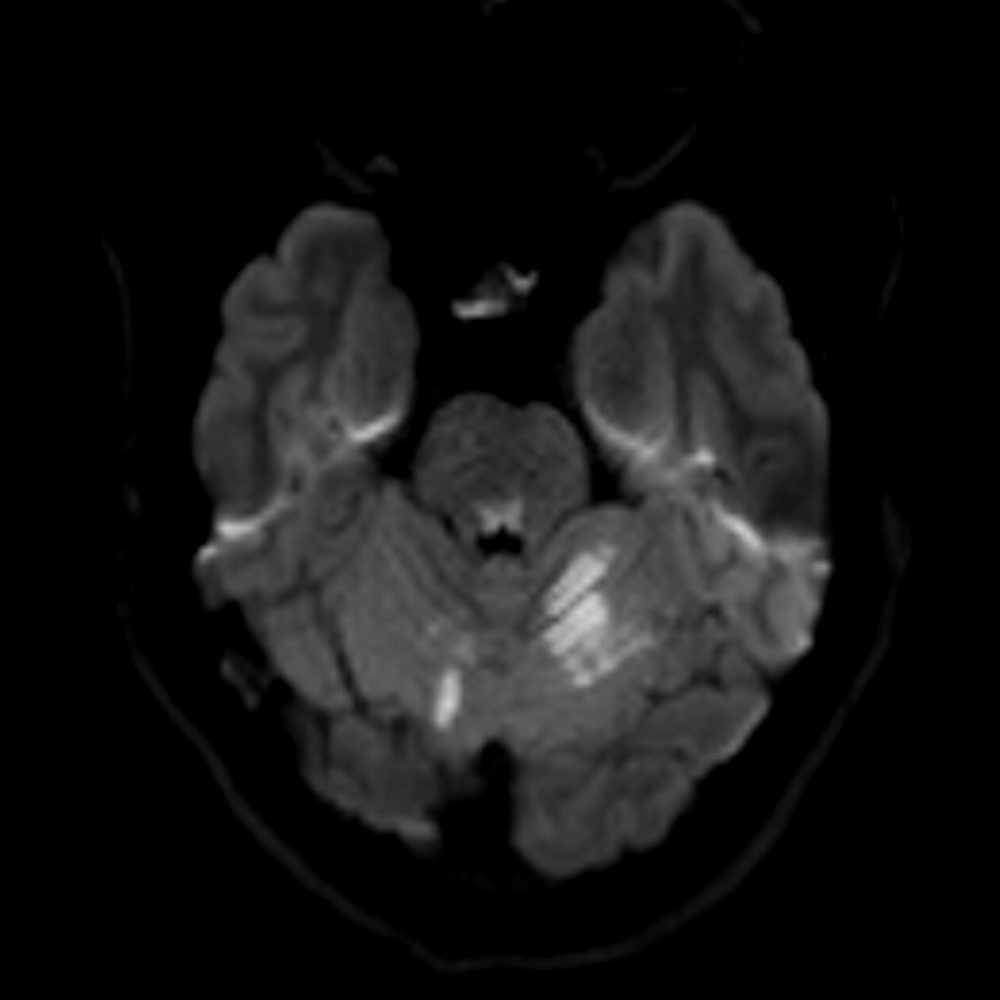 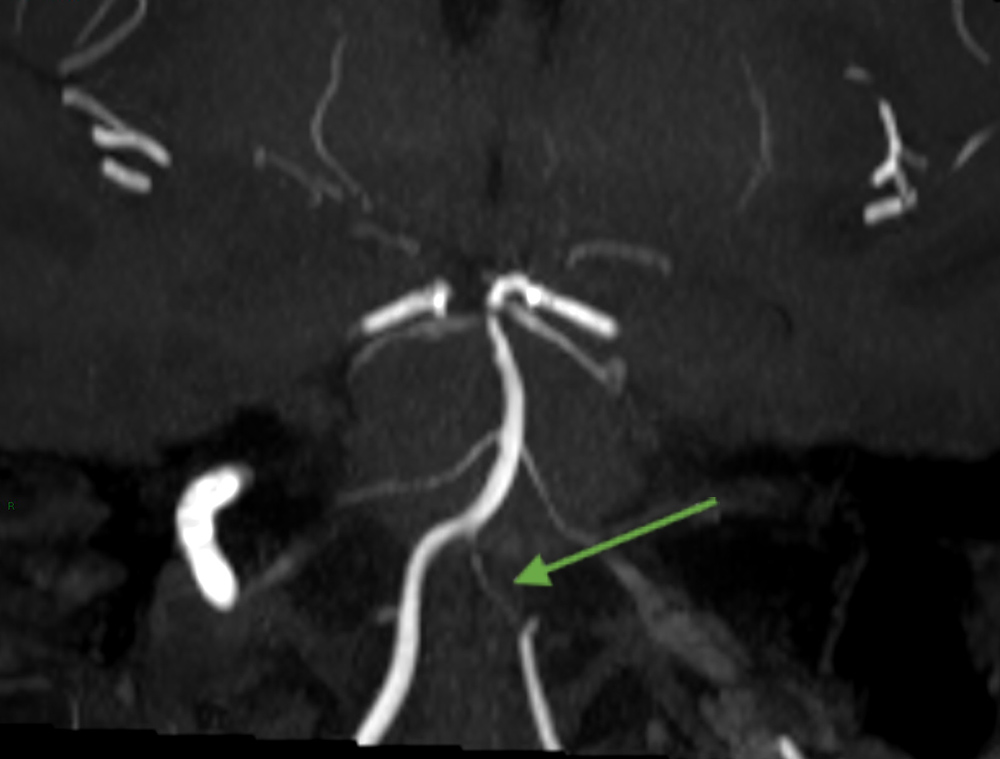 Internuclear ophthalmoplegia (INO) is an eye movement disorder generally caused by a lesion in a midbrain region called the medial longitudinal fasciculus (MLF). The MLF is pair of fibre tracts responsible for the transmission of information related to eye movement coordination, such as saccadic movements, smooth pursuit movements and the oculovestibular reflex. It serves as a pathway for all ocular motor nuclei communication as well as for conjugate gaze.
A unilateral MLF lesion (monocular INO) is characterized clinically by adduction palsy of the eye ipsilateral to the lesion and monocular abduction nystagmus on the side contralateral to the lesion. In contrast, bilateral INO manifests as bilateral adduction palsy and bilateral abduction nystagmus. Discrete limitation of smooth pursuit movements can be observed on the vertical plane. Although ipsilateral altered adduction is present in the ipsilateral eye, some patients have normal convergence, called dissociated convergence paralysis, which is an important sign for differentiating INO from pseudointernuclear ophthalmoplegia (e.g., ocular myasthenia gravis, third oculomotor nerve palsy)[2].
Almost a third of INO cases are caused by infarctions, more typically unilateral and observed in elderly patients with identified cardiovascular risk factors. Demyelinating diseases such as multiples sclerosis cause another third of cases. These are more frequent in young adults and adolescents, and most commonly occur bilaterally. Other causes include traumatic brain injury, brainstem and fourth ventricle tumours, Arnold-Chiari malformation, CNS infections (syphilis, neurocysticercosis, varicella-zoster virus), hydrocephalus and systemic lupus erythematosus with neurological complications.
Up to 75% of patients have a visible lesion on MRI. Multiple studies have demonstrated the superiority of MRI over CT for the evaluation of eye movement disorders due to brainstem dysfunction[3].
The case reported here concerns a female patient with an initial intense headache which developed before the appearance of other symptoms. Evolution of the condition with new neurological symptoms may have been the result of embolic events in several vascular locations at different times. All events had clinical repercussions, mainly manifested as bilateral INO, which affected both MLF tracts controlling conjugate gaze.
Most patients with INO with demyelinating, infectious or traumatic causes completely recovery, in contrast to those with cerebrovascular causes, where clinical recovery is less favourable[4].