Objective: The objective of this case report is to emphasize the importance of considering uncommon conditions like Fahr’s disease in the differential diagnosis of seizures and cognitive impairment, especially in patients with a history of thyroidectomy.
Materials and Methods: A 56-year-old woman who had undergone subtotal thyroidectomy 25 years previously presented with movement disorder and cognitive impairment secondary to hypoparathyroidism. A CT scan of the brain showed pathognomonic bilateral calcification in the basal ganglia, thalamus and cerebellar nuclei.
Result: The patient was diagnosed with Fahr’s disease caused by post-thyroidectomy hypoparathyroidism and successfully managed with oral calcium, carbidopa/levodopa and haloperidol.
Conclusion: We recommend the routine use of CT scanning in the long-term follow-up of post-thyroidectomy patients.

Fahr’s disease has a very low prevalence (<1 per million population) but is considered under-reported[1]. The disease is characterized by bilateral symmetrical calcium deposition in areas of the brain associated with movement control like the basal ganglia and adjacent parenchyma such as the dentate nuclei, putamen, thalami, cerebral cortex, subcortical white matter, hippocampus and cerebellum[2]. Usually idiopathic, it has however been reported to be associated with disorders of calcium and phosphate metabolism. Clinical manifestations depend on the area of the brain affected. Treatment is mainly symptomatic. The aim of this case report is to emphasize the importance of obtaining CT imaging in patients with metabolic disorders such as hypoparathyroidism.

In February 2019, a 56-year-old woman presented to our tertiary care hospital with a 1-year history of repeated episodes of generalized tonic–clonic seizures, irritability, involuntary body movements primarily of the upper limbs, dysphagia and insomnia. Her past medical history was insignificant except for subtotal thyroidectomy 25 years previously.
Symptoms had begun insidiously with involuntary movement of the upper limbs which was progressive in nature. The family had also noticed ongoing changes in her overall behaviour, including forgetfulness, irritability, disorientation and dysphoria. Later, she also developed dysarthric speech. The family visited a neurologist and the woman was prescribed anti-epileptics and anti-psychotics, with some improvement. However, during the 3 months before presentation at our hospital, the patient’s symptoms had worsened with advanced limitation of movement, so all medications were stopped. The family history was unremarkable for any neurological disease or similar disorder. Her examination showed normal vital signs and a normal neurological system without any focal deficits. Her mini-mental state score was 22/30 with mild confusion. A scar from the previous thyroidectomy was visible on her neck. There were no parkinsonian features. The biochemical laboratory findings are given in Table 1.
A non-contrast CT scan revealed massive calcifications involving the basal ganglia, thalamus and cerebellar nuclei (Fig. 1). 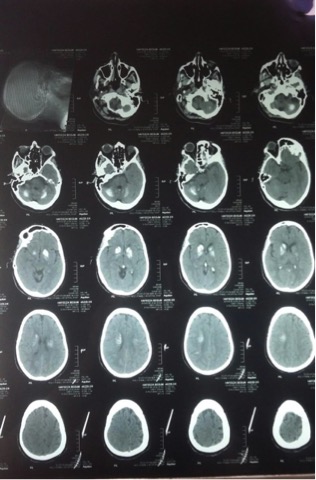 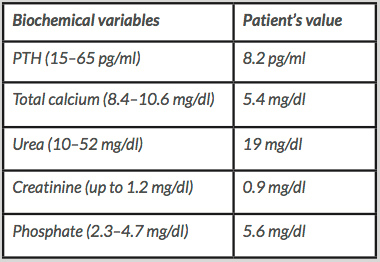 On the basis of clinical, laboratory and neurological findings, the patient was diagnosed with Fahr’s disease secondary to post-thyroidectomy hypoparathyroidism. Upon consultation with the neurology clinic, she was started on oral calcium and vitamin D which resulted in some improvement.

Fahr’s disease, also known as Fahr’s syndrome, is a rare degenerative neurological disorder. It is characterized by intracranial bilateral symmetrical calcification, particularly in the basal ganglia and dentate nucleus. These abnormal calcium deposits consist of calcium carbonate and calcium phosphate.
The specific aetiological agent for Fahr’s disease has not yet been identified. The disease has autosomal dominant, and less commonly autosomal recessive, patterns of inheritance, with three loci suggested so far: chromosomes 14q, 2 and 8[3]. Both sporadic and familial cases have been reported. Patients present with an array of clinical symptoms due to lack of full penetrance of the gene[4]. No relatives of our patient with similar neuropsychiatric symptoms were identified. Basal ganglia calcification is associated with conditions such as endocrine disorders (idiopathic, pseudo or secondary hypoparathyroidism), infections (intra-uterine or perinatal infections, brucellosis, toxoplasmosis, tuberculosis) and inherited syndromes (Aicardi-Goutieres syndrome, Coat’s disease, tuberous sclerosis complex)[5]. In our case, the condition was found to be a complication of thyroidectomy. It has been postulated that calcium deposition starts approximately three decades before clinical symptoms appear.
Based on aetiology, two forms of Fahr’s disease have been suggested: primary and secondary[6]. Primary Fahr’s is the familial or sporadic type, while the secondary form is associated with metabolic or, more commonly, endocrine pathologies, as in our case[7,8].
Clinical symptoms usually appear in fourth to sixth decades of life, as in our patient. The spectrum of clinical expression is very wide and characterized by neurological, psychiatric and cognitive impairment. However, patients without these classic features have also been reported in the literature[9].
Diagnosis requires the identification of calcium deposits in the brain by non-contrast CT scanning, which is preferred over MRI for defining calcified areas. A CT brain scan can also be performed as a pre-symptomatic test in unaffected family members. The diagnosis in our patient was based on a CT scan of the brain and low PTH levels. Diagnostic criteria for Fahr’s disease are important as (a) they are helpful in cases of Fahr’s disease with a negative family history and (b) there are several conditions which also show symmetrical basal ganglia calcification.
The diagnostic criteria for Fahr’s disease[6] are listed below:

Definitive treatment for primary Fahr’s has not been defined. However, correction of metabolic derangements such as low calcium or phosphorus levels, can result in some improvement, as in our case, and delay progression[10]. Other symptoms are usually treated symptomatically according to the brain area affected.
The patient we describe developed secondary hypoparathyroidism due to subtotal thyroidectomy performed 25 years previously which resulted in the development of Fahr’s syndrome. Therefore, we recommend CT imaging and measurement of serum calcium levels as part of long-term follow-up of patients after thyroidectomy.