Heyde’s syndrome is a form of acquired von Willebrand syndrome that consists of bleeding from intestinal angiodysplasia in the presence of aortic stenosis (AS). An association with obstructive hypertrophic cardiomyopathy, rather than AS, by a similar mechanism has also been described. We report the case of a 78-year-old woman with chronic anaemia and hypertrophic obstructive cardiomyopathy in whom intestinal angiodysplasia with active bleeding was identified by an unconventional method. In this case, the authors describe a different approach to reach the correct diagnosis. 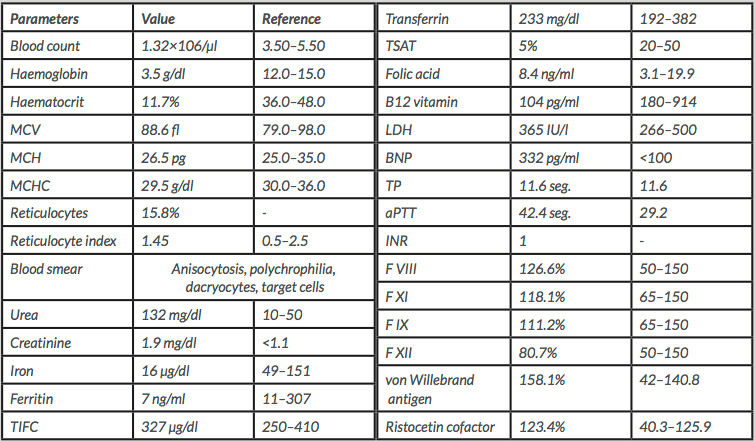 An upper endoscopy was performed but again no haemorrhage was identified above the D3–D4 portion of the duodenum. However, despite the previous normal endoscopic results, a high clinical suspicion of active gastrointestinal bleeding persisted so it was decided to perform technetium-labelled erythrocyte scintigraphy. The results showed a low-output, active haemorrhage in the jejunum. After confirmation of active bleeding, a double-balloon enteroscopy was performed to treat the two angiodysplasias found in the jejunum with argon plasma laser coagulation.
Transthoracic echocardiography confirmed the previous finding of hypertrophic obstructive cardiomyopathy with asymmetric left ventricular hypertrophy with septal predominance and a maximum thickness of 21 mm, systolic anterior motion (SAM) of the mitral valve, and obstruction of the left ventricular outflow tract (LVOT) (Fig. 1) with a maximum gradient of 144 mmHg at this level (dynamic obstruction pattern) (Fig. 2). Brain natriuretic peptide (BNP) was 332 pg/ml. Electrocardiography revealed sinus rhythm, 101 heart beats per minute and Sokolov–Lyon criteria for left ventricular hypertrophy. 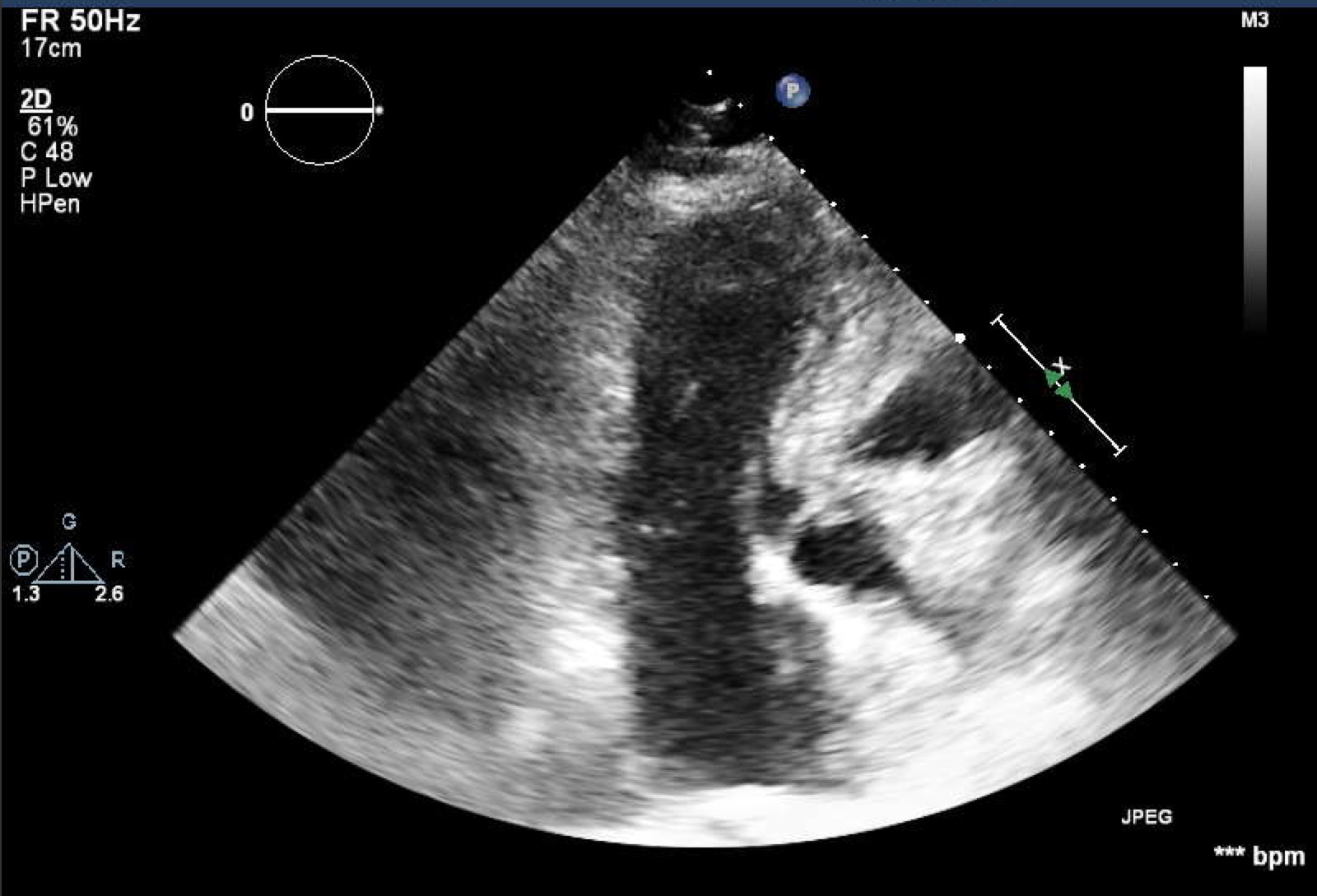 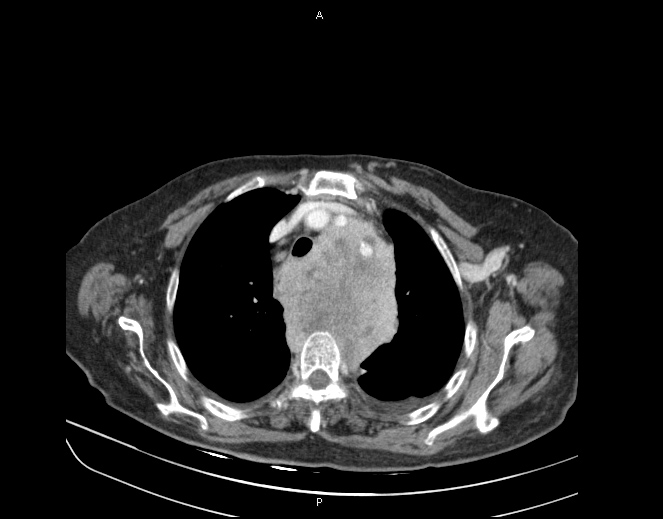 As a result, gastrointestinal bleeding in the context of angiodysplasia associated with cardiovascular disease induced by acquired von Willebrand syndrome (aVWS) was diagnosed. The patient achieved haemodynamic stability after red blood cell transfusion and isotonic saline fluid administration. The iron deficiency was treated with ferric carboxymaltose and the vitamin B12 deficiency with cyanocobalamin. At discharge, the blood count was stable with Hb of 10.7 g/dl. The patient also continued the beta-blocker started and titrated during hospitalization. The patient will be followed up in the cardiology department.

Anaemia is a common diagnosis in clinical practice but is difficult to evaluate as several conditions may be contributing simultaneously. The most frequent cause of anaemia is blood loss, but sometimes the bleeding source is not evident so the anamnesis is crucial for deciding which investigations should be performed.
Heyde’s syndrome is a form of aVWS that consists of bleeding from intestinal angiodysplasia in the presence of aortic stenosis (AS) and was first described by Edward Heyde in 1958. Shimizu et al. reported acquired von Willebrand factor deficiency in a patient with hypertrophic obstructive cardiomyopathy (HOCM) caused by the same mechanism as in AS[1–5].
The mechanism reducing von Willebrand factor (VWF) activity can be immune or non-immune. Various cardiovascular diseases, such as, HOCM, paravalvular leak after mitral valve replacement and several congenital structural diseases, as well as mechanical circulatory support systems, generate excessively high shear stress in the bloodstream. In areas of high turbulence, the VWF multimers become unfolded and elongated by the shear stress, becoming susceptible to cleavage by ADAMTS13. Several proteases, including ADAMTS13, cleave VWF when cleavage points are exposed. This cleavage results in a reduction in size and in haemostatic competence[6–8].
Given the association between aVWS and some medical conditions, patients with symptoms of bleeding and any of the above diseases should raise suspicion of aVWS. The bleeding from gastrointestinal angiodysplasia commonly seen in Heyde’s syndrome patients is caused by the increased angiogenesis observed in aVWS. Although a causal association between reduced VWF and increased angiogenesis remains to be demonstrated, VWF is thought to suppress angiogenesis[7–10].
Laboratory tests in aVWS may reveal prolongation of aPTT due to low factor VIII. Laboratory assessment of VWF level, factor VIII and ristocetin cofactor activity is appropriate. It is also important to check the VWF multimers, which are decreased in aVWS, although this assay is not readily available and so was not used in our particular case [7,8].
Our patient had a previous diagnosis of HOCM, prolonged APTT with normal coagulation factors and evidence of chronic blood loss. Although extensive diagnostic investigations had been performed previously, all had failed to identify the location of haemorrhage with severe consequences for the patient.
The bleeding was accurately located by a diagnostic method not used in the first sets of investigation – a technetium 99m-labeled red blood cell scan. Used since the 1970s, it is known to have high false positive and high false negative rates in patients with acute gastrointestinal bleeding. However, a different approach to the problem, through a complementary diagnostic examination not so well validated in the literature, allowed the correct diagnosis to be made quickly, allowing targeted treatment and a clear gain in quality of life.

Although rarely, HOCM is one of the cardiovascular diseases associated with aVWS. In our patient, the high clinical suspicion and investigative persistence allowed the intestinal haemorrhage to be confirmed as the cause of anaemia. The systematic approach was fundamental for correct treatment and led to the connection between the pathologies being made.
The use of an uncommon diagnostic scintigraphy performed with 99mTC-labeled autologous erythrocytes allowed the correct diagnosis to be made when endoscopy did not.