Aim: To describe an unusual presentation of a primary lymphoma of the central nervous system in a patient who, four months prior to admission, was diagnosed with herpes zoster ophthalmicus (HZO).
Case description: A 68-year-old man, with a history of HZO, was admitted to the emergency department with nausea and vomiting that had persisted over the previous two weeks. Neurological evaluation showed right ptosis, divergent strabismus and anisocoria. Blood tests showed high c-reactive protein, while serology was negative for human immunodeficiency virus. A brain CT scan revealed three round lesions, slightly hyperdense, periventricular in the occipital and frontal regions, which biopsy revealed to be a diffuse large B-cell lymphoma. The patient started chemotherapy but progression to death was inevitable.
Conclusion: The authors describe an unusual presentation of primary lymphoma of the central nervous system and urge physicians to be aware of this presentation in order to avoid misdiagnosis.

A 68-year-old Caucasian male was asymptomatic until two weeks before admission to the emergency department, when he developed nausea and vomiting, which persisted despite antiemetic medication. Other than a diagnosis of right-sided herpes zoster ophthalmicus (HZO), four months before admission, and type 2 diabetes, his past medical history was unremarkable. General examination on admission was normal but neurological examination revealed right ptosis, divergent strabismus and anisocoria.
Blood tests revealed normocytic normochromia anaemia with Hb 10.2, VGM 86 fl, leucocytes 5,100×109/l, thrombocytopenia with a platelet count of 91,000×109/l and a C-reactive protein level of 61.5 mg/l (normal <3 mg/l). A CT scan of the brain to rule out stroke surprisingly showed three round lesions, slightly hyperdense, with intra-axial and periventricular location (Fig.1).
Cerebrospinal fluid collected by lumbar puncture was acellular with normal protein and glucose levels, ruling out a CNS infection. Autoimmune study and serological tests, including tests for human immunodeficiency virus (HIV), hepatitis virus, syphilis and Epstein-Barr virus, were negative. 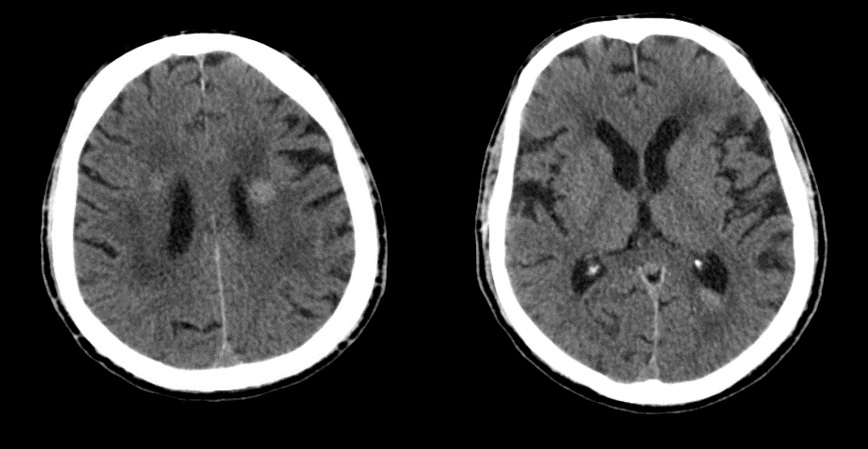 Further studies were conducted, namely an otorhinolaryngology examination, full-body CT scan, colonoscopy and upper gastrointestinal endoscopy. These did not show any signs of primary tumour or other secondary lesions. Brain MRI with diffusion-weighted imaging showed the same three lesions with perifocal vasogenic oedema, hypodensity on T1-weighted images, isodensity on T2-weighted images, and enhancement after gadolinium administration (Fig. 2). These features were felt to be compatible with a primary lymphoma of the central nervous system (PLCNS).
A biopsy of the brain mass was performed, giving findings indicating diffuse large B cell lymphoma. Methotrexate was therefore added to the treatment. Despite the rapid diagnosis and early treatment the patient died after 115 days. 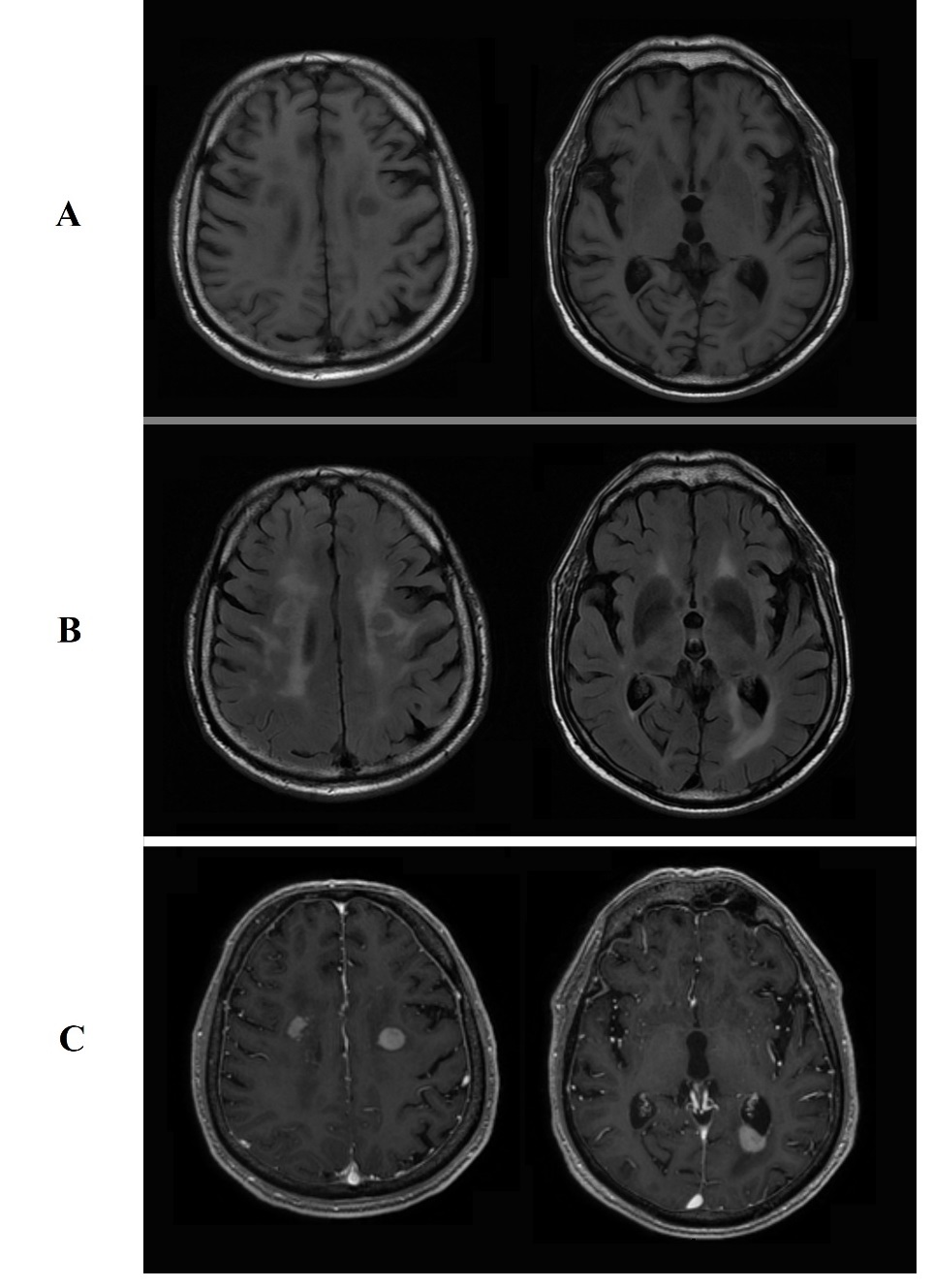 Our report raises a clinical challenge, given that, at first glance, we assumed that this patient probably had a neurological complication of varicella-zoster virus infection, specifically a cerebral infarction caused by granulomatous vasculitis. A patient with a history of HZO may develop cerebral infarction between the 8th day and 6th month[1,2] following herpes zoster infection. Our patient was HIV negative, had a lumbar puncture that excluded CNS infection, and presented with multiple lesions; on this basis, metastatic disease was also suspected. However, the full-body CT scan did not reveal any other lesion, and therefore a primary brain lesion was considered more likely. Approximately 95% of PLCNSs are large B-cell lymphomas[3]; although these tumours do not have any pathognomonic features, their clinical presentation and radiographic appearance may suggest this diagnosis. PLCNSs typically affect the supratentorial region of the brain and the most common locations are the cerebral hemispheres, basal ganglia and corpus callosum. On MRI, the lesions usually appear hypointense on T1-weighted images and hypointense to isointense on T2-weighted ones, while contrast enhancement is diffuse and relatively homogeneous[4]. Incidentally, hyperdense lesions on a non-contrast enhanced CT scan are a reflection of a high nuclear/cytoplasmatic ratio[5].
In this case, the HZO, four months prior to the admission to the emergency department, was probably a consequence of immunosuppression caused by the undiagnosed brain lymphoma. One study, however, considers a previous herpes zoster infection to be an independent risk marker for subsequent lymphoid malignancies[6].
In summary we describe an unusual presentation of PLCNS. We urge physicians to be aware of this presentation in order to avoid misdiagnosis and ensure correct treatment.