Conflicts of Interests: The authors declare there are no competing interests.
Acknowledgements: We acknowledge the important contribution of the patient, with her willingness to collaborate as this case was conducted. We also thank the Head of the Department of Dermatology, Dr Felicidade Trindade, MD, for her contribution, revision and comments and Dr Emanuel Gonçalves, MD, from the Department of Medical Oncology, for his insights.
This article is licensed under a Commons Attribution Non-Commercial 4.0 License

Background: Breast cancer is the most commonly diagnosed cancer in women, mainly at an early stage, allowing treatment with curative intent. Aromatase inhibitors are widely used in the adjuvant treatment of oestrogen receptor-positive breast cancer, mainly in postmenopausal women. The most frequent adverse events associated with these therapies are musculoskeletal symptoms and an increased risk of bone fractures. Cutaneous adverse events have been rarely described. Sweet’s syndrome can present as an idiopathic disorder in addition to being malignancy-associated or drug-induced.
Case presentation: We report the case of a 69-year old woman, diagnosed with early stage breast cancer, who underwent breast-conserving surgery, followed by adjuvant radio and endocrine treatment with letrozole 2.5 mg daily, for a foreseeable duration of 5 years. Three months after starting letrozole, she presented with sudden fever and exuberant and painful erythematous skin papules and plaques on her upper body. After a full work-up and exclusion of other potential causes, a skin biopsy confirmed the presence of dermal oedema and a diffuse neutrophilic infiltrate, suggesting Sweet’s syndrome. After discontinuation of letrozole and treatment with corticosteroids, the patient fully recovered. She resumed adjuvant treatment with tamoxifen, without symptom recurrence.
Conclusions: Sweet’s syndrome is a rare condition and an association with aromatase inhibitors has not been previously reported. Although its occurrence has already been observed in the onset of malignancies such as breast cancer, aromatase inhibitors must be added to the list of potential causes of drug-induced Sweet’s syndrome.

Breast cancer (BC) is the most commonly diagnosed malignancy and is the leading cause of cancer-related death in women[1]. Due to screening, a significant number of cases are diagnosed at an early stage, allowing treatment with curative intent. Adjuvant systemic treatment after surgery reduces the risk of recurrence and should be considered. The decision is based on individual risk of relapse and predicted sensitivity to a particular treatment modality by Ki-67, oestrogen receptor (ER), progesterone receptor (PR) and human epidermal growth factor receptor 2 (HER2) status[2,3].
Aromatase inhibitors (AIs) are commonly part of adjuvant treatment in postmenopausal women with BC, showing a survival benefit in this population. Letrozole is a non-selective AI approved for adjuvant treatment in postmenopausal women with early stage, hormone receptor-positive BC. The most frequent adverse events associated with AIs are myalgia, arthralgia and an increased risk of bone fractures. More rarely, their use may be complicated with cutaneous events such as alopecia, dry skin, urticaria, pruritus and different skin rashes[4,5].
Sweet’s syndrome (SS), also referred to as acute febrile neutrophilic dermatosis, is an uncommon inflammatory disease, and can present as an idiopathic condition in addition to being malignancy-associated or drug-induced. A constellation of clinical and pathological findings characterizes SS, which includes: sudden onset of fever; an elevated neutrophil count; tender erythematous to violaceous skin lesions as papules, nodules and plaques; and a diffuse infiltrate of mature neutrophils located in the upper dermis. Corticosteroid therapy is the treatment of choice[6].

A 69-year old, postmenopausal woman was diagnosed with early BC in February 2015. After left breast-conservative surgery and sentinel lymph node biopsy, the pathology report showed an invasive lobular carcinoma, stage IA (pT1cN0) and immunohistochemistry assessment revealed ER 95%, PR negative, HER2 negative, Ki-67 15%.
The patient’s relevant personal history included: in 2009, diagnosis of early cervical cancer, treated with radiotherapy; in 2011, diagnosis of a colonic adenocarcinoma, managed with right hemicolectomy followed by adjuvant chemotherapy; type 2 diabetes mellitus; hypertension. She was medicated for several years with antihypertensive drugs and metformin.
After case discussion within the cancer multidisciplinary team, the patient was proposed to begin adjuvant radio and endocrine therapy with an AI. She started 2.5 mg of letrozole daily in March 2015, with a foreseeable duration of therapy of 5 years.
Three months after letrozole initiation, the patient presented with sudden onset of fever (39ºC, tympanic) and an exuberant, painful and expanding skin erythema, associated with a burning sensation, located on the left trunk. She denied other symptoms, such as arthralgia, myalgia, headache or general malaise. She also denied recent viral infection of the respiratory or gastrointestinal tracts.
Physical examination revealed painful, brightly erythematous papules, some coalesced, forming plaques, with asymmetrical distribution in the neck, left trunk, back and upper extremities.

The patient’s full medical history was reviewed. Laboratory work-up revealed no signs of inflammation, with a total leucocyte count of 4,800 cells/mm3 with 69% neutrophils. The haemoglobin level was 12.6 g/dl and the liver function test, kidney function test and C-reactive protein levels were within normal limits. Blood cultures were negative. There was also no evidence of malignant disease recurrence.
Since no diagnosis could be made based on previous findings, the patient was referred to the dermatology clinics and skin biopsies were performed. Pathological examination revealed dermal oedema and a dense, diffuse neutrophilic infiltrate, compatible with SS (Figs. 1 and 2). 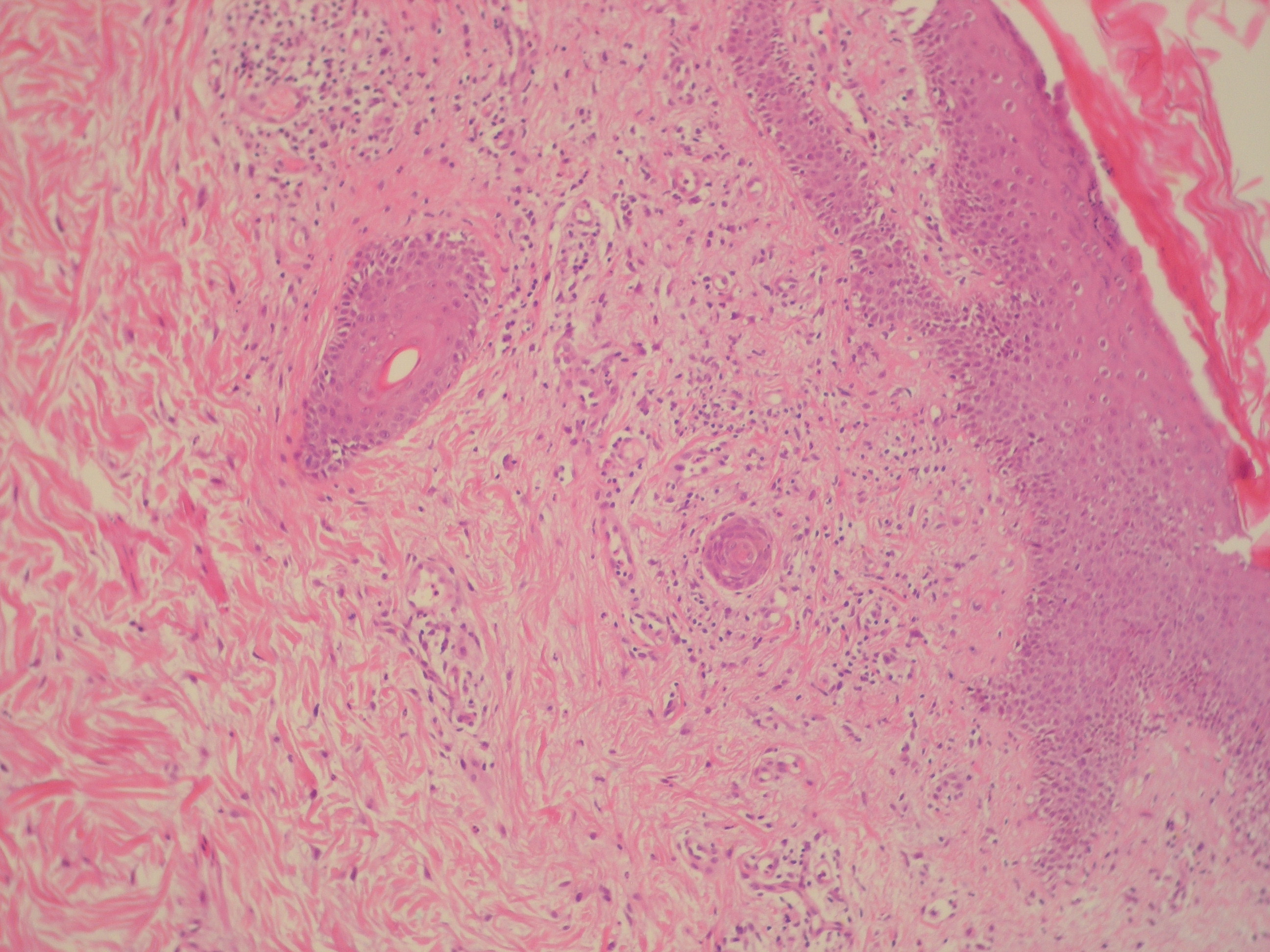 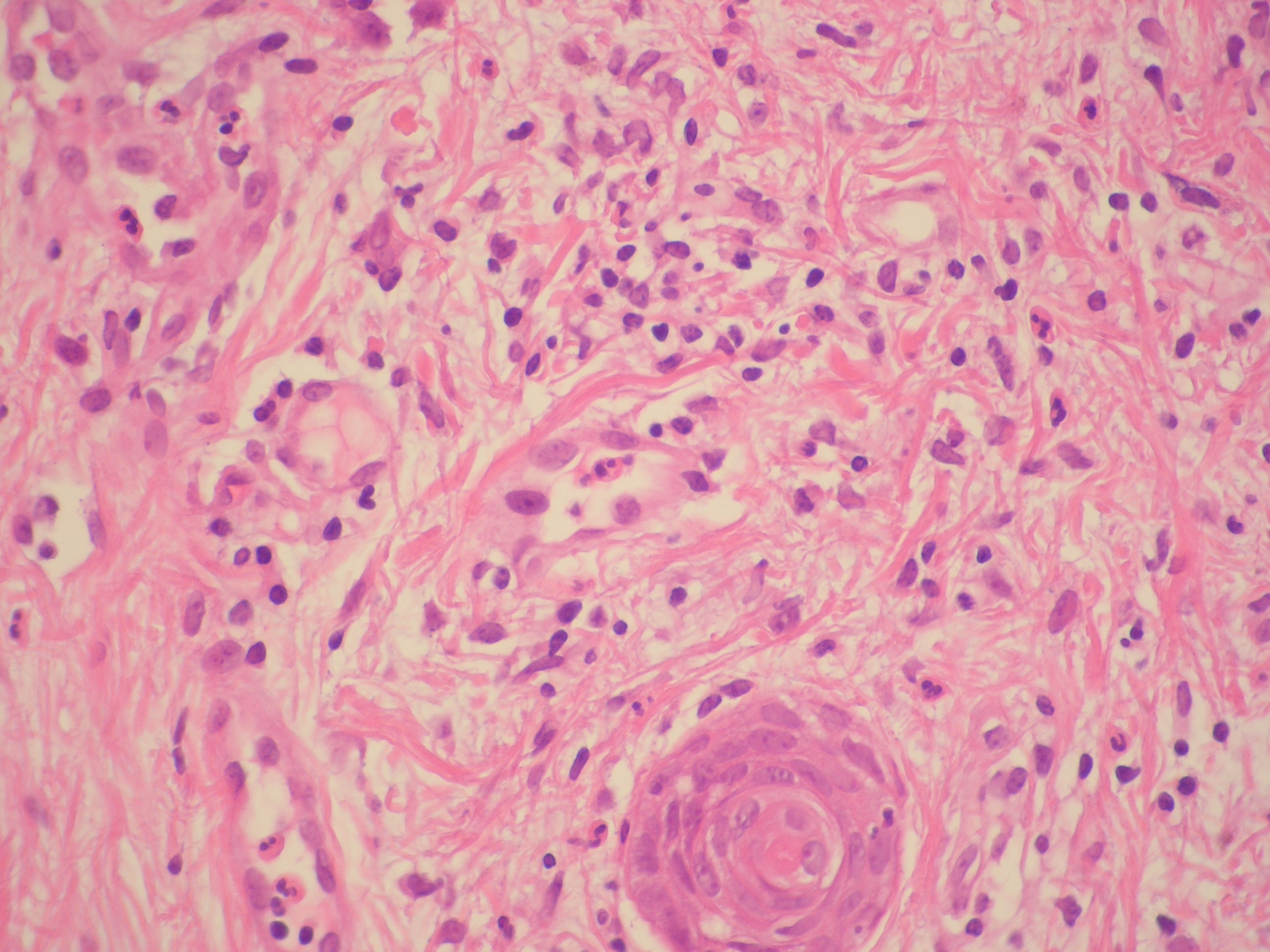 On the basis of these results, drug-induced SS was considered and letrozole was immediately discontinued. An oral course of systemic corticosteroids, with prednisolone, was started at a dose of 1 mg/kg per day for 1 week. Skin lesions improved within the first 24 hours. Prednisolone was tapered down for 7 weeks and then discontinued. Letrozole was not re-introduced and tamoxifen was started. After 4 years of follow-up, there is no evidence of SS or BC recurrence.

SS can present in different clinical settings. Although malignancy-associated SS has already been described in the onset of BC[7–11], it is more likely to occur in association with haematologic malignancies than with solid tumours, with acute myelogenous leukaemia being the most frequently associated malignancy[12]. SS could also be associated with cancer recurrence.
Drug-induced SS accounts for up to 5% of cases, most commonly associated with granulocyte colony-stimulating factor. Diagnostic criteria for drug-induced SS were established by Walker and Cohen. All 5 criteria are required for the diagnosis: 1) abrupt onset of painful erythematous plaques or nodules; 2) histopathologic evidence of a dense neutrophilic infiltrate without evidence of leucocytoclastic vasculitis; 3) pyrexia >38ºC; 4) temporal relationship between drug ingestion and clinical presentation, or temporally related recurrence after oral challenge; 5) temporally related resolution of lesions after drug withdrawal or treatment with systemic corticosteroids[13].
In the presented case, as described, all 5 criteria for drug-induced SS were present. The quick resolution after AI discontinuation strongly suggests a cause–effect relationship, and no relapse was observed with suspension of corticosteroid therapy. Presentation with fever also favours a drug-induced aetiology. In addition, in malignancy-associated SS, the onset of dermatosis is temporally related with the diagnosis of a new cancer or with the recurrence of malignancy in a patient with a previously diagnosed cancer. Fortunately, this was not our patient’s case, who remains cancer-free.