Tuberculosis is one of the major health problems in developing countries affecting different organs such as bone and joints. One of the most important involvements of osteoarticular tuberculosis is that of the sacroiliac joint. In addition, its incidence has increased over the past several years. Early diagnosis is necessary to prevent further disorders such as neurological and surgical complications. We report a tuberculous arthritis case in the right sacroiliac joint, which developed after penicillin injection.
The patient was a 32-year-old man admitted to Besat hospital, Tehran, Iran. He complained of pain, erythema and swelling in his right buttock starting approximately 17 years previously, after a penicillin injection, which was followed by the emergence of an orifice with yellow secretions. Over the years, the secretions continued but the pain, swelling and erythema were resolved. At the time of admission, his vital signs were stable and normal. In the physical examination, an orifice with a small amount of yellow secretion was detected on the right buttock as claimed by the patient. Lung auscultation was clear. No lymphadenopathy was detected. Laboratory data were normal.
During hospitalization, initial antibiotic therapy was prescribed. After Mycobacterium tuberculosis was detected in culture, a 4-drug anti-TB therapy encompassing rifampin, isoniazid, ethambutol and pyrazinamide was prescribed for 18–24 months, in addition to daily vitamin B6 and pantoprazole.

Sacroiliitis is a clinical syndrome, the diagnosis of which is often difficult, because of its different and various symptoms and the probability of being confused with other diseases [1]. Bone and joint tuberculosis incidence has increased in recent years. Early diagnosis is necessary to prevent further disorders such as neurological and surgical complications[2, 3]. We report a case of tuberculous arthritis in the right sacroiliac joint, which developed after penicillin injection.

The patient was a 32-year-old man who, approximately 17 years previously, after a penicillin injection, had started to have pain, swelling and erythema in his right buttock. After several days, the lesion started to produce a yellow secretion and made an orifice. Over the years, the secretion continued but the pain, swelling and erythema resolved. The patient reported occasional swelling around the orifice and that discharge occurred when he pressed on the area.
He had no significant past or family history and had not taken any medication at the time of admission.
Approximately 7 years previously, excisional surgery was carried out on the lesion and malignancy was ruled out.
Two years previously, he underwent a whole body scan that revealed inflammatory bone disease and pelvic MRI with a fistula protocol showed septic arthritis with osteomyelitis and an 8 cm fistulous tract that originated from fluid in the right sacroiliac joint and extended posteriorly to penetrate the gluteal muscles with an external opening in the right buttock.
In the physical examination, vital signs at admission were: body temperature 36.8°C, blood pressure 100/65 mmHg, pulse 75 beats/min and respiration rate 18 breaths/min. Lung auscultation was clear. No lymphadenopathy was detected. There was a 3 cm hyperpigmented area with fullness on the right buttock and an orifice with a small amount of yellow secretion. In addition, past surgery scars were seen on the right buttock but there was no erythema or redness. There was no limitation in the range of motion of the right hip and the muscle force of both inferior limbs was 5/5. No other significant signs were found in the physical examination.
Laboratory data showed a high erythrocyte sedimentation rate (ESR; 15 mm/h) and normal C-reactive protein (CRP) levels, haemoglobin of 16.6 g/dl, 5,700/ml leucocytes with a normal differential count (36.7% lymphocytes, 57% segment, 6.3% mixed) and 203,000/ml platelets. Fasting blood sugar, complete urinalysis and the Brucella agglutination test were all normal. Urine culture was negative.
A Mantoux test was carried out and the result was positive, with a 15 mm duration after 3 days.
Chest radiography showed a calcified area in the right hilum and also a prominent left hilum. Anteroposterior radiography of the pelvis showed an increased density of the right sacroiliac joint (Fig. 1). Computed tomography (CT) revealed right sacroiliac joint fusion and decreased joint space and sclerosis (Figs. 2 and 3). 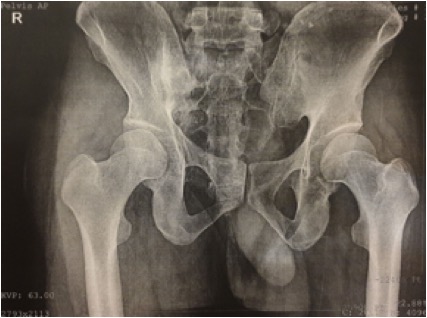 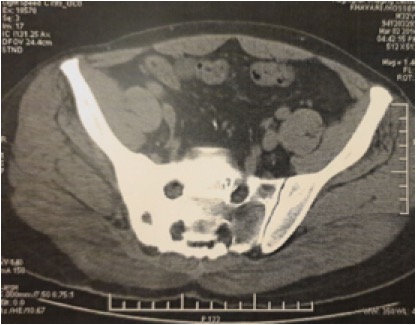 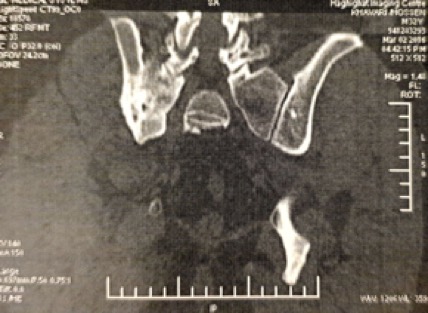 During hospitalization, initial antibiotic therapy was prescribed and urea and creatinine were checked daily until the culture results were obtained obtained. When the culture results revealed the presence of Mycobacterium tuberculosis, a 4-drug anti-TB therapy encompassing rifampin, isoniazid, ethambutol and pyrazinamide was prescribed for 18–24 months, in addition to daily vitamin B6 and pantoprazole. Due to atypical signs and symptoms, such as the absence of acute and severe pain and no limitations in the range of motion, and the normal laboratory findings (except for the ESR), the diagnosis took a long time.
On the other hand, our patient was from Afghanistan and was racially similar to the Iranian race. As the culture of the sacroiliac region secretions was positive for Mycobacterium tuberculosis, the patient started anti-tuberculosis treatment and was also improved in follow-up. A CT scan of the lung showed pulmonary hilum pump, but ACE testing for the patient was negative.
After treatment, the symptoms decreased and the patient now has no secretions. After 2 years, follow-up MRI of the hip joint showed evidence of chronic osteomyelitis in the right side of the sacrum and iliac bone with decreased signal intensity in favour of fibrotic changes. After comparison with previous images, the signal intensity of bone and soft tissue was decreased but the size of the collection in the sacroiliac joint had not significantly changed.

Tuberculosis is one of the major health problems in developing countries affecting different organs in the body. First described by an English surgeon, Sir Percivall Pott, osteoarticular tuberculosis is presently reported in approximately 3% of all cases of tuberculosis, and comprises the majority of extrapulmonary tuberculosis cases, making up 15% of these [4–6]. One of the most important involvements of osteoarticular tuberculosis is the sacroiliac joint. Mostly limited to sporadic cases, this complication is estimated to account for approximately 0.3 to 0.5% of all tuberculosis cases [5, 7–21].
Sacroiliac tuberculosis can bring about localized signs and symptoms around the joint [3, 22, 23], initiating most commonly with persistent lower back pain [24–26], which is worsened by sitting, doing physical activities and walking [12, 27], leading to antalgic gait [14, 28–31]. The pain can vary in terms of location because of both the capability of the abscess to form tracts in different directions and the proximity of the sacroiliac joint to the lumbosacral plexus, thereby radiating pain to the posterior thigh, groin and even below the knee [8, 12, 21, 32]. The presence of signs indicating femoral or sciatic nerve root irritation can be explained by the close contact of the distended anterior joint capsule and the lumbosacral plexus, leading to lumbosacral radiculopathy misdiagnosis [33]. Sacroiliac joint tenderness and positive sacroiliac joint stress tests are present in most cases [6, 34]. However, other signs of joint involvement such as inflammation, swelling, redness and heat may be absent due to the depth of the joint location, and therefore, might be overlooked [12, 17, 27, 35, 36].
There are many diseases that can cause similar complications and these should be clearly taken into account and carefully ruled out. These diseases can vary widely; from degenerative arthritis, post-traumatic arthritis, pyogenic infections, metabolic conditions such as hyperparathyroidism as well as gout and pseudogout, connective tissue disorders, familial Mediterranean fever, osteitis condensans ilii and pigmented villonodular synovitis, to tumours and tumour-like conditions, and even inflammatory diseases, most of which bring about bilateral involvement of the sacroiliac joints, such as inflammatory bowel diseases, Reiter’s and Behçet’s syndromes, psoriatic arthritis, seronegative spondyloarthropathies and ankylosing spondylitis, which is most of the time accompanied by an early bilateral and symmetric involvement of the sacroiliac joints [23, 36–40].
Thus, associated signs and symptoms such as peripheral joint involvement, bowel dysfunction, rashes, urethritis and uveitis should be keenly considered to make a reliable diagnosis [23, 38, 40].
As for routine laboratory tests including ESR and CRP measurement, although it has been stated that these are useful in assessing the response to therapy, they are not of great significance in the diagnostic process of tuberculosis [37]. In our case, as an example, a slightly elevated ESR (15 mm/h) and normal CRP levels did not fully accord with the underlying infection that has since been proven to be present.
Initially, x-rays of the sacroiliac joint may be normal if the disease has not evolved much [41], but with progression of the disease a haziness and loss of the joint line is revealed, which in later stages is replaced by joint widening, sclerosis of the margins and possible sequestra. Finally, within 3–4 years of the onset of medical treatment, fusion of the sacroiliac joint can occur [5, 8, 21, 42–47].
CT scans can determine joint space widening, sequestra and calcification more vividly than x-rays normally can [8, 12, 16, 19, 20, 38, 32, 47, 48].
In the early stages, capsular distension is evident in MRI scans of the sacroiliac joint, while MRI of the sacrum usually indicates a diffuse oedema of the bone marrow that has a hypointense appearance in T1- and a hyperintense appearance in T2-weighted images, as well as tubercular lesions that may be misinterpreted as either other infectious diseases or neoplasms [8, 16, 49–52].
Bone scans can also be accommodating when the diagnosis is uncertain [19, 20].
Finally, surgical biopsy is needed to ensure the accuracy of the diagnosis by pathological studies [53].