Liver metastases from neuroendocrine tumours (NETs) are usually seen on cross-sectional imaging at presentation. In such cases, curative surgical resection is usually not possible given that most patients have bilobar disease. Various locoregional approaches are now widely available that enable local control of disease and management of systemic symptoms. These include trans-arterial embolization (TAE), trans-arterial chemoembolization (TACE), selective internal radiotherapy and thermal ablation.
We describe a rare case of hepatic necrosis after TAE in a 61-year-old woman with a metastatic NET. Cross-sectional imaging showed extensive necrosis affecting segments VII and VIII of the liver. This occurred secondary to thrombosis in the portal vein branches to these segments, confirmed on a Doppler ultrasound scan. The mechanism of portal vein thrombosis after TAE could be due to the presence of occult arterioportal anastomoses. These allow transit of the embolizing agents into the portal vein branches supplying the treated segments and subsequent thrombosis.

A 61-year-old woman was diagnosed with a metastatic neuroendocrine tumour (NET) after having presented with a several-month history of abdominal pain, watery diarrhoea, weight loss and occasional flushes. Computed tomography (CT) of the abdomen and pelvis showed a lesion in the distal small bowel, an associated desmoplastic reaction, pathologically enlarged mesenteric lymph nodes with a conglomerate mass measuring 5.5 cm (Fig. 1), as well as bilobar liver metastases (measuring up to 2.1 cm). Findings were confirmed using magnetic resonance imaging (MRI; Fig. 2). Chromogranin A levels were slightly elevated, at 128 pg/l (<102 pg/l) and an ultrasound (US)-guided biopsy confirmed a well-differentiated neuroendocrine neoplasm, staining strongly for synaptophysin, chromogranin A and CDX2. 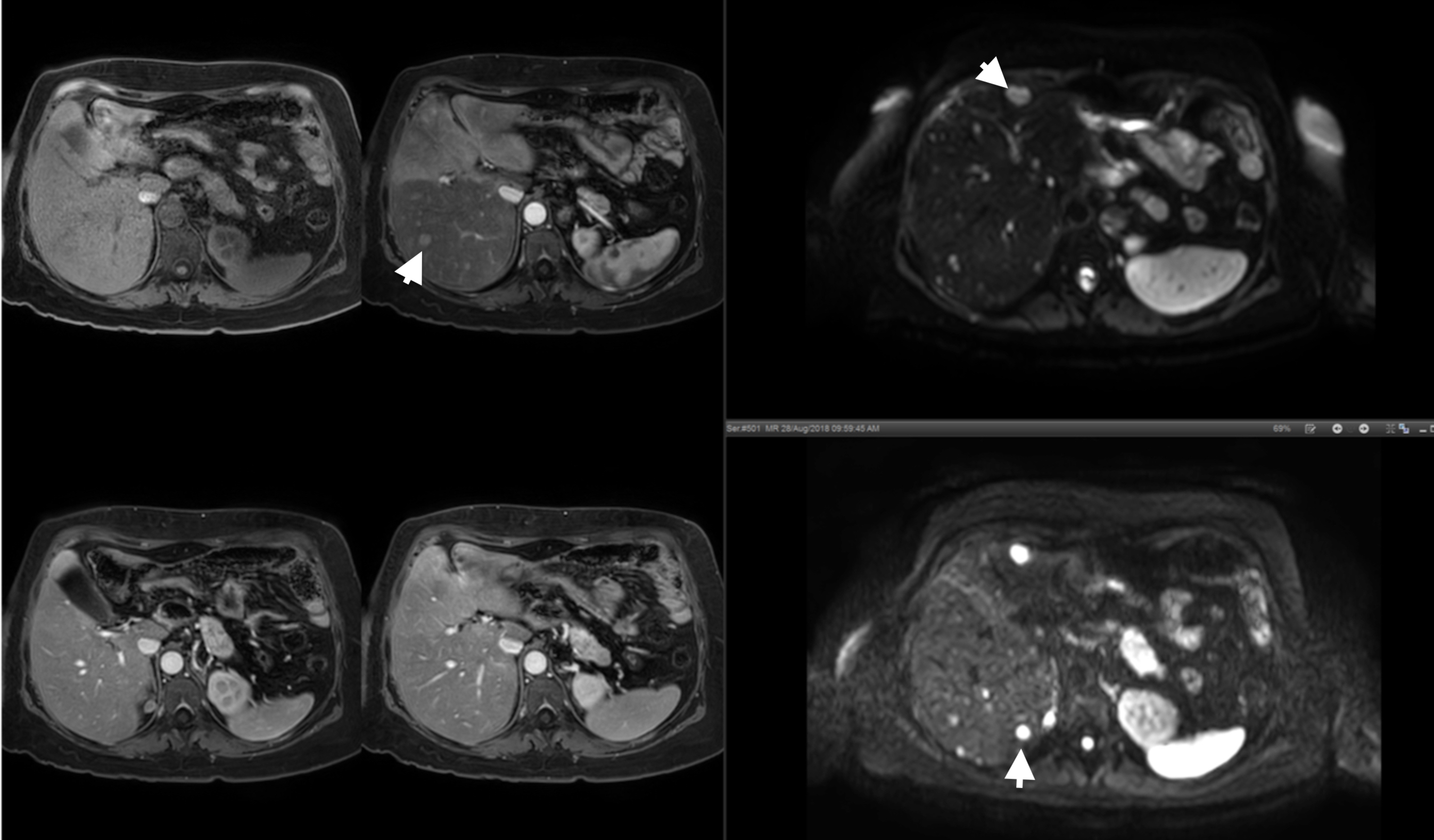 The patient presented with subacute intestinal obstruction 2 months later and required intestinal bypassing of the tumour. She was subsequently started on octreotide and was also referred for trans-arterial embolization (TAE) of the liver metastases.

TAE was carried out via a right femoral approach (Fig. 3). The coeliac access was catheterized, and angiography showed trifurcation of the common hepatic artery into the gastroduodenal artery, left hepatic and right hepatic arteries. Both the right and left hepatic arteries were catheterized using a microcatheter and TAE was performed using a total of 10 ml of ethiodized oil (Lipiodol®, 480 mg iodine per ml, Guerbet LLC) and 1 vial of 100–300 µm beads (DC BeadTM, Terumo). There were no immediate post-procedure complications.
One day after the procedure, the patient started complaining of nausea and abdominal pain in the right hypochondrium. She was initially thought to be suffering from post-embolization syndrome (PES). However, the patient’s condition deteriorated further over the following days. She complained of recurrent vomiting, poor appetite and worsening lethargy. The patient also developed signs of fluid overload and a low-grade fever.

Blood investigations confirmed that the patient had developed acute liver injury, with a deranged liver profile and an elevated international normalized ratio (INR) of 2.3 (0.9–1.1). A non-contrast CT scan showed extensive necrosis in the liver mainly involving segments VII and VIII and gallbladder wall necrosis (Fig. 4). Areas of increased attenuation secondary to Lipiodol® use were also noted.
A Doppler US scan of the hepatic vasculature confirmed thrombosis of the portal vein branches to segments VII and VIII in keeping with the area of necrosis. The main, left portal, right portal vein and its branches to segments V and VI were otherwise patent with normal hepatopetal flow. Normal flow was also noted in the main, right and left hepatic arteries, as well as in the hepatic veins. Findings were subsequently confirmed using MRI, which showed a large area of necrosis measuring 11.8 cm by 10.4 cm in the right hepatic lobe, secondary to thrombosis of the anterior division of the right portal vein (Fig. 4).
Gastroenterologist input was sought, and the patient was started on supportive medical therapy. Given the coagulopathy, the patient was not anticoagulated. Her stay was complicated by fluid overload and sepsis. Blood cultures repeatedly came back positive for various Bacteroides species, as well as Enterococcus faecium sensitive to vancomycin and teicoplanin. Infectious disease specialists were consulted on various occasions, for optimization of antibiotic regimes. 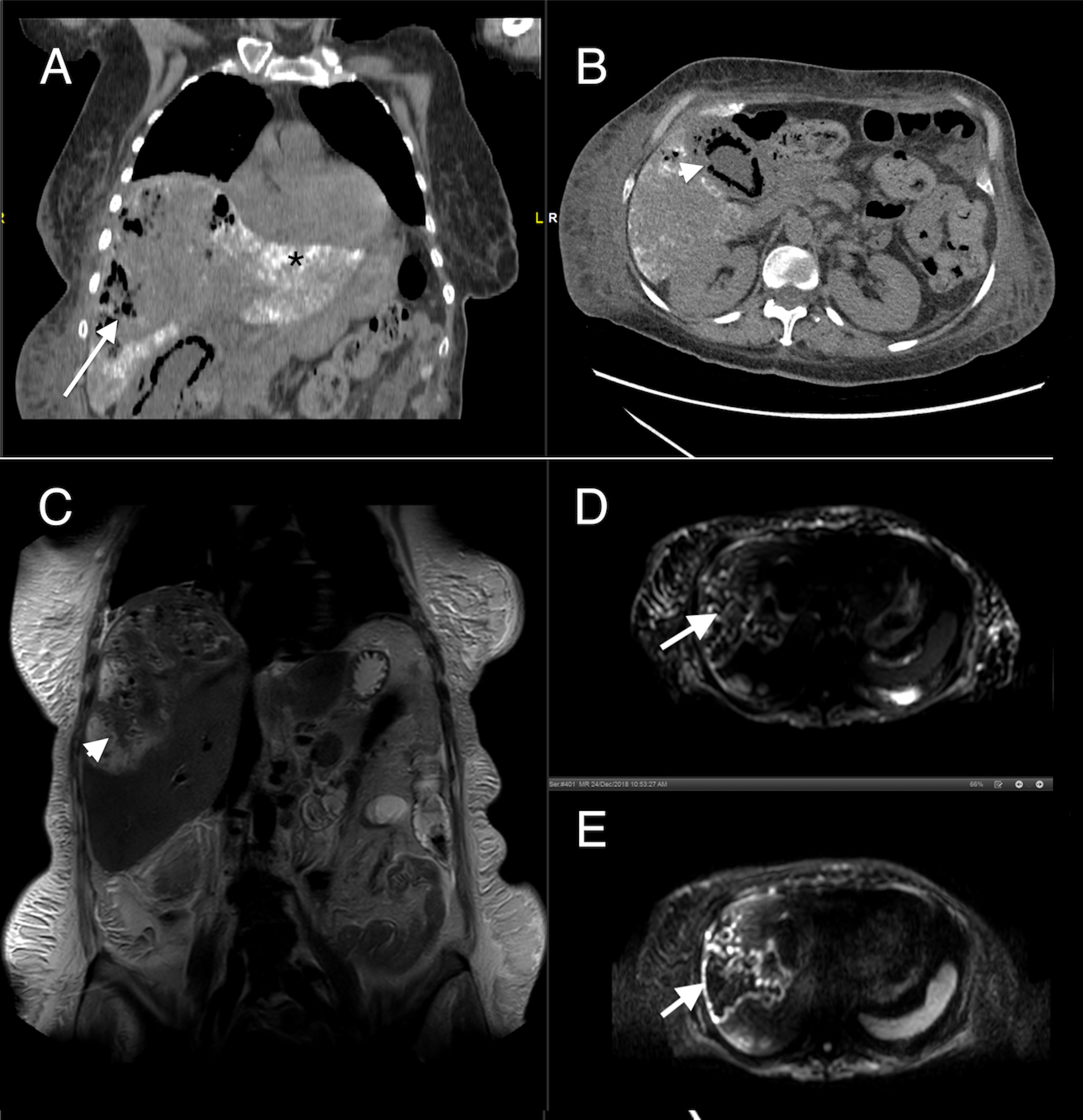 Figure 3. Coeliac angiography (left) showing variant hepatic arterial anatomy, with trifurcation of the common hepatic artery (CHA) into the right hepatic (RHA), left hepatic (LHA) and gastroduodenal arteries (GDA). TAE was performed selectively via a microcatheter parked in the RHA and LHA (right)
Figure 4. CT showing extensive necrosis involving most of the right hepatic lobe (A, arrow), with Lipiodol® deposition throughout the remaining segments (A, asterisk). Note was also made of emphysematous cholecystitis, with thickening of the gallbladder wall and pneumatosis (B, arrowhead). MRI carried out 10 days after TAE, coronal T2-weighted (C) showing extensive necrosis in the right liver lobe (arrowhead), only partially resolved as compared to the CT images (A, B). Restricted diffusion is seen around this necrotic area (arrows; b=50, D; b=800, E)

Despite the liver injury and the sepsis, the patient made a remarkable recovery. Her liver function improved (Fig. 5) and the patient was discharged on oral antibiotics after 7 weeks in hospital.
She continued to take octreotide injections every 4 weeks. Repeat MRI several weeks after discharge showed a decrease in size in the necrotic collection with choledocholithiasis and compensatory hypertrophy of the remaining liver segments. The treated liver metastasis showed high-grade necrosis, while the pathologically enlarged mesenteric conglomerate of lymph nodes remained overall unchanged. Repeat chromogranin A testing 2 months after discharge was normal at 64 pg/l (<102 pg/l). 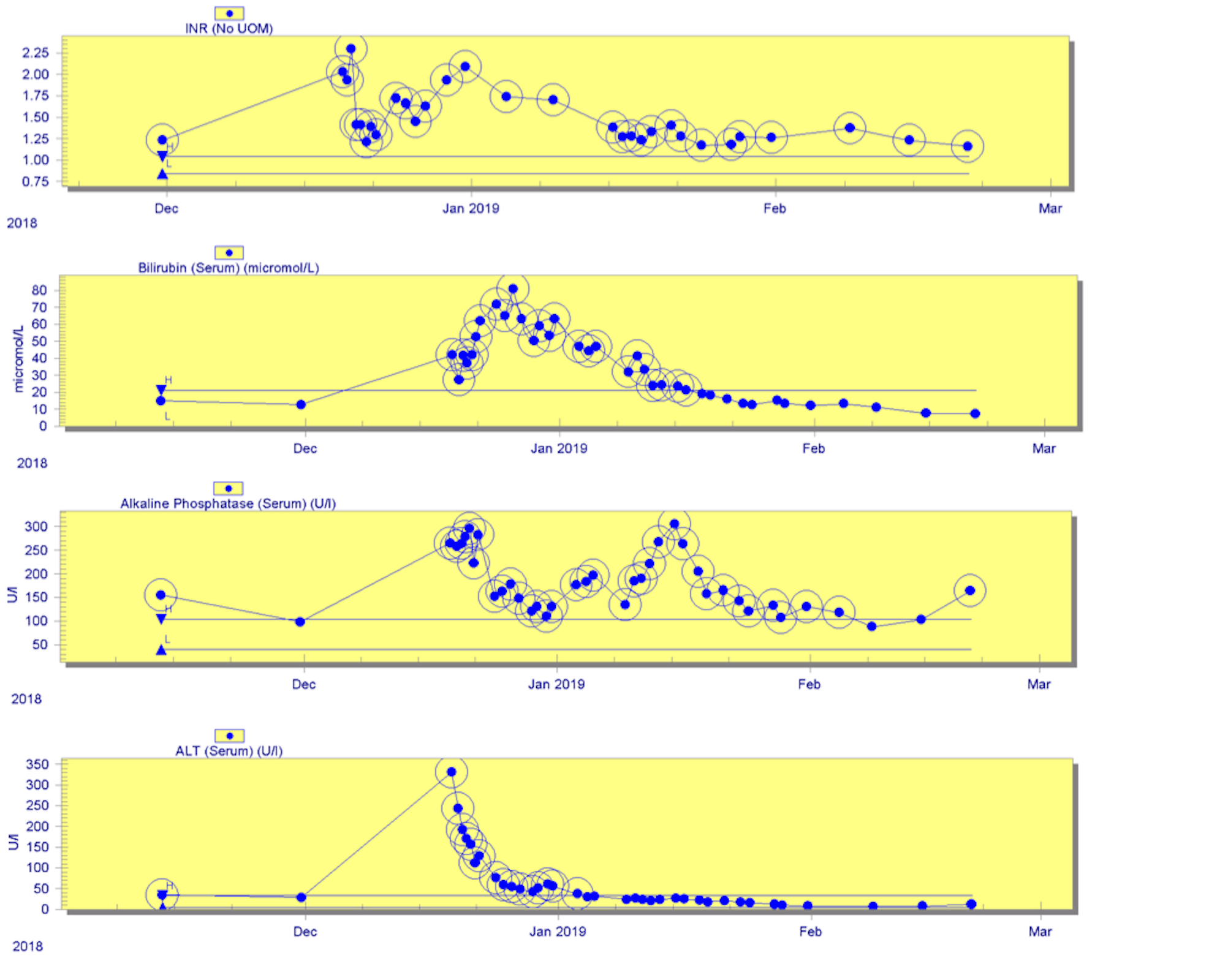 Figure 5. Trends of liver markers and the international normalized ratio (INR) over time, up to 1 month after discharge

NETs represent an important subgroup of tumours, which may present with mechanical and endocrinological manifestations. Approximately 46–93% of patients may develop liver metastases, and these may be present at the time of initial diagnosis in approximately 12.9% of patients[1].
TAE deprives tumours of their arterial supply, by embolization of the feeding hepatic artery branches through the use of various liquid or solid embolization agents, including ethiodized oil, gelatin powder, particles and beads. This is because metastatic lesions are mostly supplied by the hepatic artery, rather than the hepatic portal vein [1].
TAE is generally considered a safe procedure. PES is a commonly recognized minor complication after TAE. It is characterized by fever, right upper quadrant pain with nausea and vomiting, and also, a transient elevation in transaminases [1]. The patient was initially believed to be suffering from PES. However, given the persistence of the symptoms and the deterioration of the patient’s general condition, a more serious underlying pathology was eventually suspected.
Liver necrosis is a very rare complication after TAE, as the liver parenchyma receives a dual blood supply via the hepatic arteries and the hepatic portal veins[1]. It has only been reported in a few cases[2,3]. Patient death was the most common outcome in these cases. In 1 study, Tu et al. reported a major complication rate of 0.84% per TAE/TACE procedure. The most common complications described included liver rupture, liver abscess and femoral artery pseudoaneurysm; no cases of liver necrosis or portal vein thrombosis were reported in this study[4]. To the best of our knowledge, the incidence of hepatic necrosis after TAE has not yet been reported, and we found no literature describing cases of portal vein thrombosis induced by TAE.
We present a very rare case of liver necrosis after TAE with secondary liver injury. The necrosis, mainly affecting segments VII and VIII, was likely due to thrombosis of the right portal vein branches to the respective segments. One hypothesis to explain the pathophysiology of portal vein thrombosis after TAE could be the presence of communications between the terminal hepatic arterioles and portal venules. This normally occurs at the level of the peribiliary plexus, terminal arteriosus twigs, the vasa vasorum of the portal vein and direct arterioportal anastomoses[5]. The possibility of occult arterioportal anastomoses that may not be appreciated on angiography should also be considered in this case.