Idiopathic CD4+ T-cell lymphocytopenia (ICL) is a rare clinical syndrome defined by a persistent unexplained deficit of circulating CD4+ T-cells in the absence of HIV infection or any other cause of immunodeficiency. For a diagnosis, CD4+ T-cell counts should be below 300 cells/μl or less than 20% of total lymphocytes in repeated evaluations (2–3 months apart)[1, 2]. The majority of cases are in adult individuals but the condition can also affect children and adolescents. 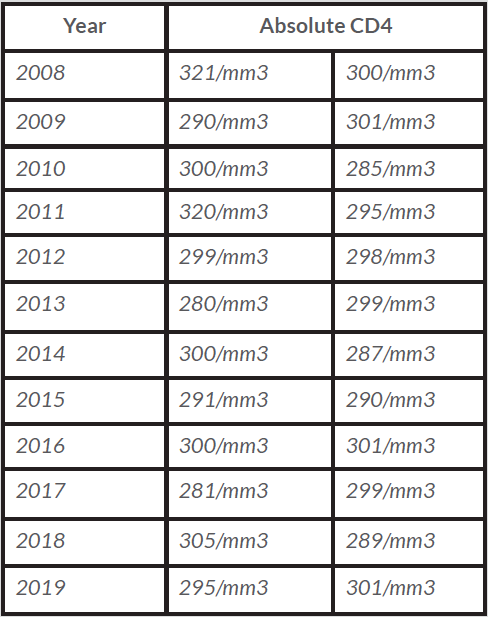 Table 1. Biannual tests showing CD4 lymphocyte counts in our patient from 2008 to 2019

Patients can be asymptomatic as in the case reported or present with opportunistic infections, malignancies and/or autoimmune disorders[1]. Immune dysregulation is considered to be responsible for the clinical manifestations in this syndrome and the degree of lymphopenia predicts disease. Opportunistic infections are seen when the absolute CD4 cell count drops below 200 cells/mm. Patients with severe immunosuppression are clinically indistinguishable from those with advanced HIV infection.
A wide variety of infections has been reported, including, for example, persistent genital infection with human papilloma virus (HPV), varicella-zoster virus, cryptococcal meningitis, mycobacterial infections, Fusobacterium nucleatum, Salmonella typhimurium causing sepsis- like presentations, Actinomycosis species, Rhodococcus equi and cytomegalovirus retinitis[3, 4]. ICL rarely presents with recurrent bacterial infections even though this clinical picture has more often been described in children.
Malignancies such as lymphomas are quite prevalent in these patients[5] and Kaposi sarcoma of the digestive tract or skin has also been described. Autoimmune disorders, especially entities involving the skin and mucous membranes, have also been reported. Of note, they can present either before or after the diagnosis of ICL is made. The spectrum is wide and may include, for example, idiopathic thrombocytopenic purpura and systemic lupus erythematosus[3].
ICL is a diagnosis of exclusion; no infections or immunological abnormalities should be present, as in our case. The differential diagnosis should include acute or chronic retroviral infections, sarcoidosis, common variable immunodeficiency, congenital immunodeficiencies, chemotherapy immunosuppression, cancer, acute respiratory distress syndrome and autoimmune disorders.
The prognosis is variable and depends on the severity of immunosuppression, with most severe infections occurring at diagnosis or soon thereafter. There is no consensus concerning monitoring and treatment, but management of ICL should be focused on the treatment of associated conditions.
Régent et al. prospectively followed 40 patients from 1991 to 2012. In their study, infections developed in 25 patients at diagnosis or during follow-up. At the time of diagnosis, the mean CD4 T-cell count was 127/mm3 (significantly below our patient’s initial CD4 count). The authors also reported that at the end of follow-up all but one of the patients with available CD4 T-cell counts showed persistent CD4 T-cell counts. They also highlighted that an initial CD4 T-cell count <150/mm3 or a low NK cell count (<100/mm3) were related to a poor prognosis[5]. Even though fortuitous detection of asymptomatic patients with ICL has been reported, probably only a minority of patients remain asymptomatic as in the case presented.

ICL is a rare condition and it is a diagnosis of exclusion. CD4 cells stabilize at a low level rather than continuing to fall as in HIV infection.