Eribulin is an antineoplastic agent used in advanced breast cancer refractory to anthracycline and taxane treatment regimens. A wide variety of side effects with unclear mechanisms have been noted, but encephalopathy has not been widely reported. Here we describe the case of a middle-aged woman treated with eribulin for advanced breast cancer who subsequently developed central nervous system drug-induced toxicity but improved promptly with steroid administration.

A 49-year-old woman with a history of advanced breast cancer was brought to our facility due to altered mental status. She was found at home to be visibly disoriented. Her malignancy had been treated by partial lumpectomy followed by chemotherapy and radiotherapy. The tumour was estrogen receptor (ER) positive, progesterone receptor (PR) positive and HER-2 negative, which allowed her to be placed on hormonal therapy. The initial chemotherapy regimen was a combination of paclitaxel and capecitabine. Later investigations suggested advancement of the cancer that necessitated the addition of eribulin which was initiated 10 days previously with the last (second) dose of eribulin administered 1 day before the current presentation.
Initial assessment revealed a middle-aged Caucasian woman who was visibly lethargic and poorly oriented as regards time and place with a Glasgow coma scale (GCS) score of 11/15. Her blood pressure was 146/90 mmHg, respiratory rate was 16 breaths/minute with an oxygen saturation of 94% on room air, heart rate was 80/minute and she was afebrile. Her pupils were equal and round, while fundoscopy revealed normal results. There was no nuchal rigidity or other signs of meningitis. Her nasolabial folds were symmetrical. Bilateral upper extremity strength was normal and equal. Cerebellar signs could not be elicited. Initial laboratory investigations revealed a white blood cell (WBC) count that was minimally elevated at 13.6×103 cells/µl and a haemoglobin level of 10.5 g/dl. Serum sodium was elevated at 147 mEq/l. A non-contrast computed tomography (CT) scan of the head was negative for bleeding, a mass or a space-occupying lesion. Magnetic resonance imaging (MRI) revealed bilaterally symmetrical hyperintensity of the basal ganglia without metastatic deposits (Fig. 1). 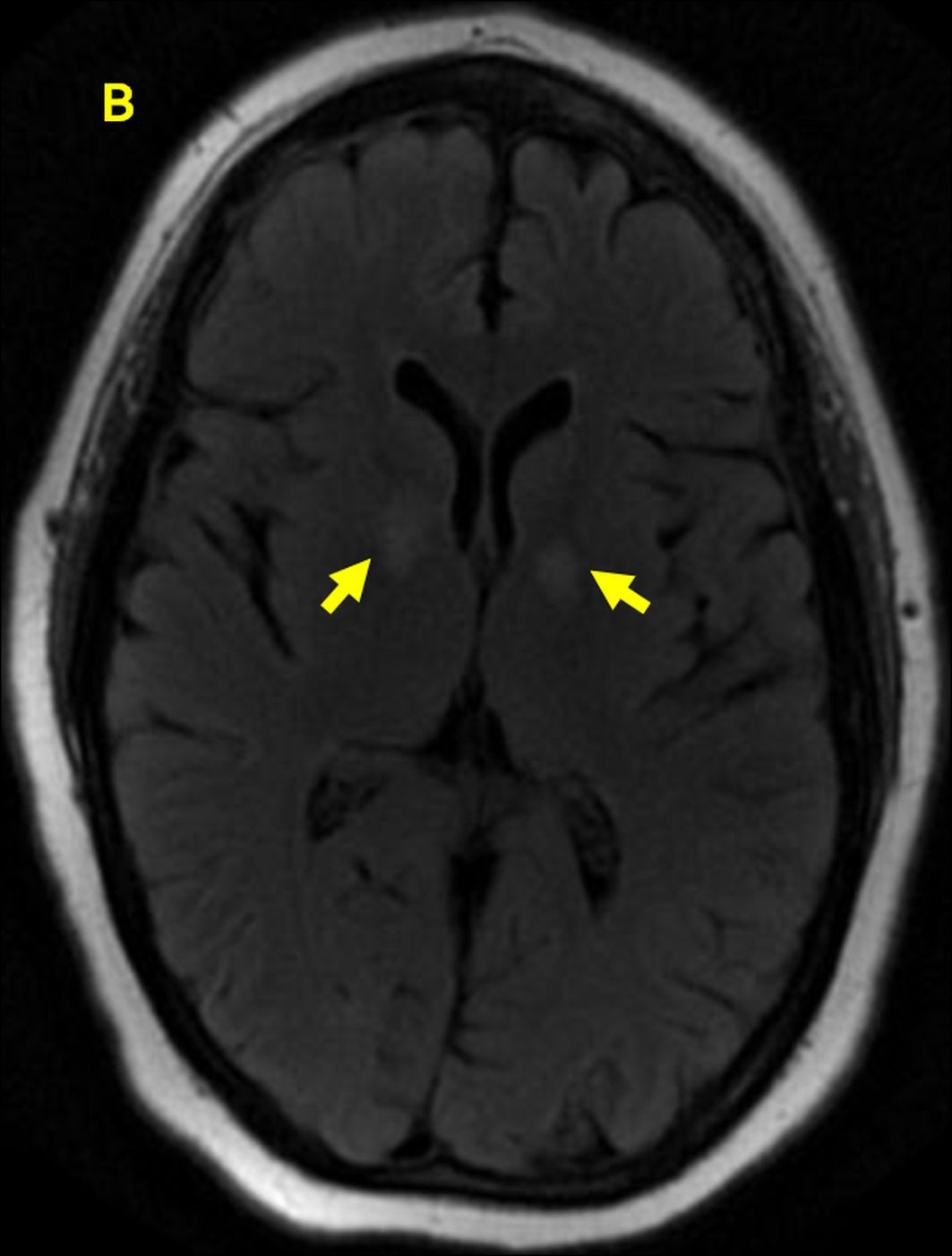 An echocardiogram and Doppler ultrasound of the carotids were negative for thrombus. Lumbar puncture was unremarkable and negative for infection.
The differential diagnosis for the patient’s altered mental status included an underlying urinary tract infection which was ruled out based on a normal urine sample, while accidental exposure to carbon monoxide or cyanide was excluded based on normal serum values. An electroencephalogram (EEG) showed diffuse mild slowing of waveforms with no epileptiform activity. The patient continued to have a fluctuating mental status for the next 24 hours. Due to exclusion of known differential diagnoses of altered mental status, given the long half-life of eribulin, central nervous system (CNS) toxicity due to an inflammatory response secondary to eribulin was suspected. The patient was therefore started on a trial of dexamethasone (initial dosage of 10 mg followed by 4 mg every 8 hours) and was closely monitored. Significant improvement in orientation was observed with the patient achieving complete lucidity over the next 2 days. Dexamethasone was withdrawn following resolution of symptoms, eribulin use was stopped and the patient was asked to attend a cancer centre for follow-up.

Eribulin is an antineoplastic drug used as a third-line agent for advanced breast cancer [1]. It targets microtubules at a different binding site than that targeted by anthracyclines and taxanes. Side effects such as neutropenia, dizziness, headache, peripheral neuropathy and abnormal liver function tests have been reported [1, 2], but encephalopathy has not been previously noted. This is the first reported case that associates eribulin with encephalopathy characterized by altered mental status and suggests steroids could be used for treatment in addition to cessation of eribulin. The effect of eribulin on the central nervous system (CNS) is unclear. Preclinical evidence suggests that the agent does not cross the blood–brain barrier (BBB) to a significant extent [3]. However, diplopia after eribulin has been attributed to the drug crossing the BBB in a higher concentration due to brain metastasis and the resultant disruption of the BBB. Some patients with HER2-negative advanced breast cancer and CNS involvement showed a partial response to eribulin [4]. Radiotherapy has been known to compromise the BBB as well, with patient response to eribulin improving after radiotherapy [5]. We hypothesize that eribulin could have entered brain tissue in therapeutic quantities resulting in altered mental status, given the history of radiotherapy in our patient.
The mechanism of eribulin-induced confusion is unclear. The exclusion of exposure to toxins such as carbon monoxide and cyanide as well as the absence of metabolic derangements such as liver disease, glycaemic aberrations or hypoxia, suggested eribulin-induced encephalopathy.

Eribulin is commonly associated with side effects such as neutropenia, peripheral neuropathy and elevation of liver enzymes. Our case emphasizes the role of eribulin in drug-induced encephalopathy which improved after cessation of the drug and the concomitant use of steroids. The exact mechanism of the drug-induced injury is unclear. Therefore, future studies to help identify the potential effects of eribulin on the central nervous system should be conducted.