Subungual squamous cell carcinoma (SCC) is a rare malignant tumour with an indolent course and unknown aetiology. It is usually misdiagnosed as a benign lesion, resulting in delayed treatment. Although psoriasis is not a precancerous skin condition, the treatment modalities cyclosporine and psoralen with ultraviolet A (PUVA) might increase the risk of developing cutaneous SCC, although a relationship has not been confirmed.
We describe a patient with psoriasis who had been treated with cyclosporine and PUVA 6 years previously. He developed back SCC 2 years later, a subungual skin lesion after another 2 years and presented to us 1 year later, when nail elevation and biopsy revealed SCC.

Squamous cell carcinoma (SCC) of the nail bed is rare entity which is frequently misdiagnosed as a benign condition. Digital amputation is often necessary because of the delay in diagnosis and the involvement of the distal phalanx [1].
In most cases SCC of the nail bed presents as a circumscribed erythematous papular lesion of variable size, with a flat surface, which is desquamative or even elevated and can extend from the nail bed to the lateral and distal folds of the nail. Symptoms are very diverse and include paronychia, dyschromia, onycholysis, ulceration, bleeding and pain. The tumour can also resemble other clinical conditions such as chronic paronychia, pyogenic granuloma, common wart, onychomycosis, psoriasis, subungual exostosis and melanoma [2]. The aetiology of subungual SCC is still obscure. However cutaneous SCC has established risk factors including PUVA and cyclosporine [3].

A 60-year-old man presented to our outpatient department complaining of 1-year history of a persistent chronic subungual lesion in his right index finger. His medical history included psoriasis, diagnosed 6 years previously, for which he received cyclosporine 3 mg/kg for 3 weeks followed by 150 PUVA treatments. Two years after the end of treatment he developed back SCC which was treated by wide local excision in another hospital. Two years after this he noticed a subungual lesion which was diagnosed primarily as a psoriasis lesion. The lesion was left untreated for a further year, when he presented to us as it was progressively increasing in size, causing subungual dull aching pain.
In light of the increased incidence of cutaneous SCC with cyclosporine–PUVA treatment for psoriasis, nail elevation and biopsy of the subungual lesion was carried out under digital block. Bacteriological examination showed no obvious growth, but histopathological examination revealed SCC (Fig. 1).
Two view plain x-rays showed tumoural invasion of the dorsal aspect of the distal phalanx. Investigation confirmed there was no distant metastasis. After discussion of different treatment modalities, amputation of the distal phalanx was carried out under digital block (Fig. 2). 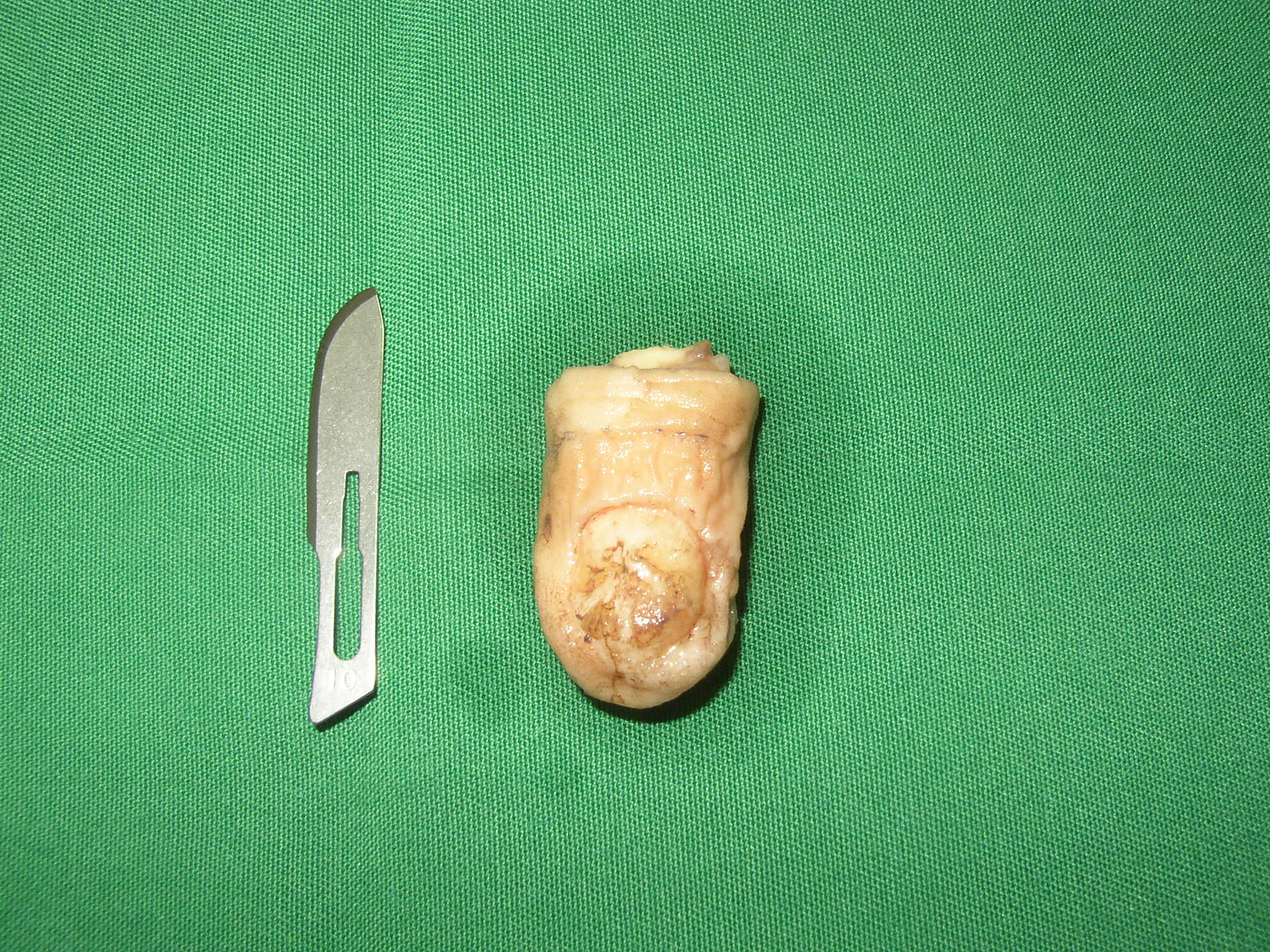 Histopathological examination of the amputated specimen revealed SCC stage 1 invading the dorsal aspect of the distal phalanx with clear resection margins.
The patient had an uneventful recovery apart from limited wound infection which resolved with oral antibiotics. No local recurrence or distant metastases were observed during 1-year follow-up. The patient has adequate hand function.

TSubungual SCC is a rare malignant tumour which can affect one or more phalanges and whose aetiology has not been properly established. It was first described by Velpeau in 1850, and even though it is the most common primary malignant neoplasm of the nail bed, it is still rare as only 150 cases have been reported in the literature [1, 4]. Cutaneous SCC is the most common skin cancer, with a well-known list of predisposing factors including exposure to UV light; PUVA is used to treat psoriasis [3]. Subungual SCC is a disease of middle age (50–59 years) and usually presents as a persistent subungual lesion generally affecting the thumb [4].
Diagnosis of subungual SCC is often missed or delayed due to its atypical clinical presentation which can mimic other diseases such as verruca vulgaris, onychomycosis, pyogenic granuloma, nail dystrophy, exostosis, chronic paronychia, psoriasis, melanoma and keratoacanthoma, trauma-induced nail dystrophy, leuconychia, subungual hyperkeratosis, trachyonychia, longitudinal erythronychia, melanonychia and subungual tumoural syndrome. Generally, suspicion of cancer increases after the failure of antifungal and antibiotic therapy, which may delay diagnosis until the disease has metastasized [5–7]. Diagnosis can only be made through biopsy. Cases diagnosed early can be treated with micrographic surgery while late diagnosis with bony invasion usually requires amputation. Axillary lymph node involvement and distant metastasis are uncommon [1]. Unfortunately, in our case diagnosis was slightly late, but resection had a favourable outcome.