Hypoglycaemia is rare in apparently well patients without drug-treated diabetes mellitus and warrants evaluation and management when Whipple’s triad is present. Even in the absence of Whipple’s triad, when repeatedly low values of plasma glucose are documented, the presence of endogenous hyperinsulinism should be investigated. The authors describe a case of endogenous hypoglycaemic hyperinsulinism, its diagnosis and treatment and the challenges of determining its aetiology.

Hypoglycaemia is rare in apparently well patients without drug-treated diabetes mellitus and warrants investigation when Whipple’s triad is documented [1]. Different causes of hypoglycaemia should be considered in adults who are apparently healthy than in those who are ill. The supervised 72-hour fast is considered the gold standard for provoking and establishing a diagnosis of spontaneous hypoglycaemia [2], which normally occurs during fasting, while the mixed-meal test is more accurate for postprandial hypoglycaemia [1]. However, an overnight fast can provide the required data and is much more cost-effective than a prolonged fast [2]. Appropriate blood tests performed during a hypoglycaemic episode (serum glucose, insulin, C-peptide, pro-insulin, beta-hydroxybutyrate and sulfonylureas) can establish the aetiology in those where illness or medications are not an apparent cause. If spontaneous symptoms do not occur, clinicians may have to recreate the circumstances under which patients develop them, using one of two tests: a supervised 72-hour fast or a mixed-meal test [1, 3].

We describe the case of a 78-year-old woman hospitalized due to infected bronchiectasis with acute hypoxaemic respiratory failure that was successfully treated with intravenous antibiotics. She had aluminium pneumoconiosis with multiple bronchiectasis for at least 6 years and a recent acute pulmonary thromboembolism for which she was medicated with apixaban 5 mg twice a day. During hospitalization, she had multiple asymptomatic fasting hypoglycaemia values as measured by a glucometer and confirmed in venous blood samples (minimum of 21 mg/dl). Low plasma glucose levels had already been documented in previous hospitalizations and were attributed to acute decompensation of the patient’s chronic conditions. During hypoglycaemic episodes, the patient never presented haemodynamic or neurological dysfunction, her physical examination was normal and she showed no symptoms. She had no history of drug or alcohol abuse and no history of insulin or insulin secretagogue intake. She had no history of psychiatric disease or of self-harm. Pancreatic, hepatic, renal and cardiac acute insufficiencies were excluded. Re-infection was also excluded.
After 12 hours of fasting, blood glucose was 40 mg/dl, C-peptide 4.99 ng/ml (upper range 0.6 ng/ml), plasma insulin 4.84 µU/ml (upper range 3.0 µU/ml) and ketone bodies were absent in urine, confirming the existence of endogenous hypoglycaemic hyperinsulinism. Thyroid function tests were normal (TSH 1.06 µg/l, T4 0.71 µg/l) and 8 am cortisol was 16.3 µg/dl. Insulin antibodies were negative. Abdominal computer tomography (CT) and magnetic resonance imaging (MRI) did not show any pancreatic mass/abnormality. Endoscopic pancreatic ultrasound and somatostatin receptor scintigraphy were also normal. A selective pancreatic arterial calcium stimulation test revealed a more than twofold increase in hepatic venous insulin levels over baseline values following calcium gluconate injection into the splenic artery (Table 1), allowing localization of the source of insulin hyperproduction to the body/tail of the pancreas. Based on the lack of the precise anatomical location of the lesion, the patient’s comorbidities and the high surgical risk, a conservative approach was followed. Diazoxide was initiated at a 50 mg twice daily and no further hypoglycaemic events were documented. 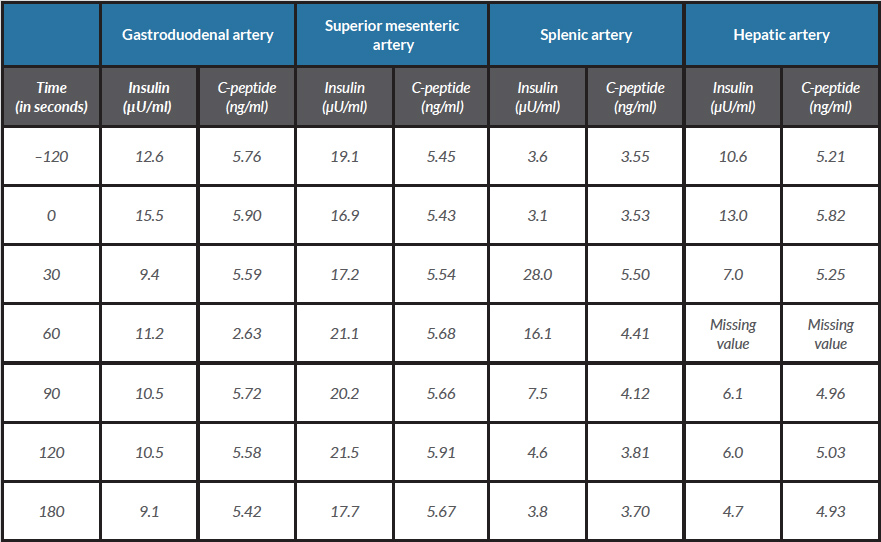 In this case, the hypoglycaemic episodes were frequent with values low enough to warrant investigation (frequently <40–50 mg/dl, with a minimum of 21 mg/dl), despite the absence of Whipple’s triad. If the plasma glucose value is severely and repeatedly depressed, even without hypoglycaemic symptoms, it may not be necessary to perform the supervised 72-hour test or the mixed-meal test in order to document endogenous hyperinsulinism [3].
The patient presented no autonomic symptoms, probably because hypoglycaemia episodes had been repeatedly occurring for quite some time. Counter-regulatory mechanisms exist to rapidly increase glucose levels in order to protect the brain from hypoglycaemia. When hypoglycaemic episodes are frequent and recurrent, the burst in sympathoadrenal activity is attenuated and counter-regulatory mechanisms are not triggered resulting in hypoglycaemia unawareness (HU) [4, 5]. The HU phenomenon is well established and has been studied in diabetic patients; its hallmark is the onset of neuroglycopenia before the appearance of autonomic warning symptoms [4]. HU is more common and more severe in individuals with frequently low levels of plasma glucose [4]. Several studies have reported that, in the group of HU patients, there are specific brain regions that exhibit decreased glucose uptake in response to hypoglycaemia [4]. It has been hypothesized that recurrent hypoglycaemia leads to HU through alterations in glucose transport and/or metabolism. HU is reversible in diabetic patients if hypoglycaemia is strictly avoided [4] and it has also been proved to possibly be reversible in a pre and postsurgical study of patients with insulinoma where tumour removal restored epinephrine secretory capacity and awareness of symptoms [5].
In this patient, imaging studies were unable to detect the insulinoma; however, a negative imaging study does not exclude the diagnosis [1]. Therefore, a selective pancreatic arterial calcium stimulation test was performed and showed insulin hyperproduction at the body/tail of the pancreas. When radiology studies do not identify a pancreatic mass, the alternative diagnosis of nesidioblastosis should be considered in which case the selective pancreatic arterial calcium stimulation test shows diffuse pancreatic insulin hyperproduction [1]. In our patient, a focal abnormality was detected, supporting insulinoma as the most likely diagnosis for the endogenous hypoglycaemic hyperinsulinism. Nonetheless, cases of endogenous hyperinsulinaemic hypoglycaemia due to coexisting nesidioblastosis and insulinoma have been described [3]. Tissue samples from our patient were not available and the possible coexistence of nesidioblastosis could not be investigated.
The presented case emphasises the high degree of suspicion needed to diagnose endogenous hypoglycaemic hyperinsulinism in a seemingly well patient who is hospitalized for another reason. Various aetiologies can cause the repetitive low glucose values; in the particular case of our patient the infection and the increased physiological stress associated with hospitalization should be considered.
This case was challenging in both its diagnosis and its treatment. The patient underwent five diagnostic tests, only one of which supported the existence of a lesion in the pancreas body/tail. A complex diagnostic work-up is not uncommon. About 50% of insulinomas measure <1 cm and pre-operative tumour localization may be demanding [1]. Non-invasive techniques often fail to localize small tumours, and in the majority of cases, several diagnostic tests are necessary. Selective arterial pancreatic stimulation requires a lot of time, space and staff but is often informative.