The serological prevalence of Epstein-Barr virus (EBV) among young adults exceeds 90% worldwide. Even though EBV primary infection is usually benign, severe complications can occur in adolescents and young adults and so the disease must be promptly diagnosed. The development of an oropharyngeal abscess leading to a descending necrotizing mediastinitis (DNM) is exceptional and potentially lethal, so early diagnosis with a CT scan, appropriate antibiotics and surgery are essential.
The authors present a case where DNM was associated with reactive hemophagocytic syndrome as a result of infectious mononucleosis, as well as a review of similar cases in the English literature.

An obese but otherwise healthy 24-year-old man was admitted to the emergency department with a 7-day history of sore throat, dysphagia to solids, mild weight loss and flu-like symptoms. He denied chest pain, shortness of breath or other significant symptoms. Physical examination revealed tachycardia (105 bpm), low-grade fever (37.6°C), bilateral tender submandibular lymphadenopathies, pharyngeal exudate, and abdominal pain in the upper-left quadrant. Pulmonary investigation, respiratory rate, blood pressure and oxygen saturation were normal.
Initial laboratory tests showed leucocytosis (WBC 14.42×103/mm3) with a majority of lymphocytes (44%, of which 14% were atypical), elevated C-reactive protein (70 mg/l), hepatic cytolysis and cholestasis (AST 209 U/l, ALT 429 U/l, AP 234 U/l, GGT 287 U/l, total bilirubin 2.6 mg/dl). Epstein-Barr virus (EBV) IgM and IgG were both positive; serological test results for HIV, CMV, toxoplasmosis, hepatitis A, B and C were negative. The abdominal ultrasound revealed only splenomegaly.
The patient was admitted to the infectious diseases ward for surveillance with a diagnosis of acute EBV infection. The severe dysphagia was explored by laryngoscopy which did not show any abscesses. As a result of poor clinical status, with persistence of high fever and an extremely elevated C-reactive protein level (>400 mg/l), the patient was empirically started on intravenous cefuroxime and clindamycin. Blood cultures yielded multi-susceptible Gemella morbillorum. Despite 4 days of adequate antibiotic treatment, the patient’s condition worsened into sepsis with mild encephalopathy, hypoxaemia and liver failure (INR 1.8, bilirubin 7.82 mg/dl, AST 225 U/l, ALT 155 U/l, arterial ammonia 141 µg/dl, platelet count 138×103/mm3) and he was admitted to the intensive care unit. A second laryngoscopy remained normal; chest radiography was also normal.
Fever, splenomegaly and elevated levels of ferritin and triglyceride raised a high suspicion of reactive hemophagocytic syndrome (RHS), but the bone marrow aspirate was inconclusive. Antibiotics were changed to intravenous piperacillin-tazobactam, and new blood cultures returned positive for Streptococcus anginosus. A new chest radiograph showed enlargement of the superior mediastinum and cervical region, and thoracic CT revealed descending anterior and posterior necrotic mediastinitis as a result of the extension of abscesses located in the submandibular and retropharyngeal spaces (Fig. 1). 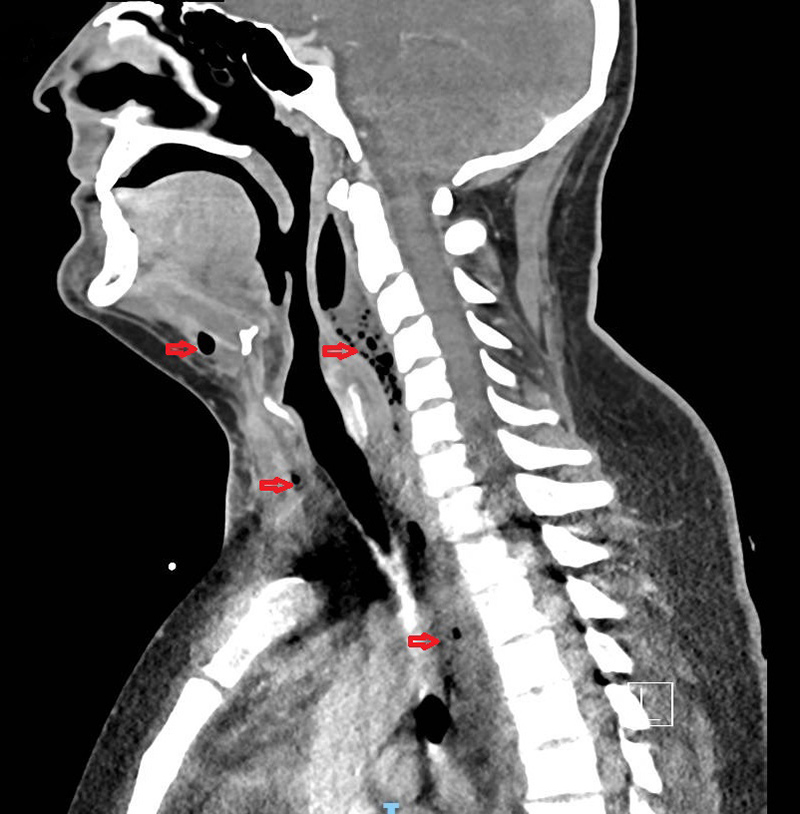 Figure 1. Cervical and chest computed tomography. Red arrows show purulent gaseous collections in the submandibular and retropharyngeal spaces, descending into the mediastinum along the cervico-thoracic spine

Surgical drainage was carried out by cervicotomy: purulent collections were drained from the cervical and mediastinal spaces. Right thoracoscopy was then performed in order to drain a low residual mediastinal abscess and the pleural space. Mixed aerobic and anaerobic flora with a predominance of S. anginosus were isolated from the surgical samples. The pleural drain was removed. The patient received a prolonged course of intravenous amoxicillin-clavulanate (until 21 days after the second surgery) and fully recovered.
Because of the extremely severe presentation of an acute EBV infection with suspicion of hemophagocytic syndrome, an immune investigation was performed: no immunoglobulin defect was found and lymphocyte typing was normal. A genetic study could not be carried out.

The serological prevalence of EBV, also known as human herpes virus 4, among adults exceeds 90% worldwide. Infection is often asymptomatic in early childhood, but primary acquisition of EBV during late adolescence and early adulthood is responsible for infectious mononucleosis (IM), a usually benign and self-limited disease clinically characterized by the triad of pharyngitis, fever and lymphadenopathy. However, the risk of serious complications, sometimes requiring hospitalization, increases with age, and the incidence of IM has been reported to be rising among immunocompetent adults [1]. The most frequent acute lethal complications of EBV include spleen rupture, neurological disorders, and upper airway obstruction from tonsillar enlargement [2].
Descending necrotizing mediastinitis (DNM) is an extremely unusual and severe complication of EBV. It has been postulated that EBV induces immunosuppression with a transient decrease in T-cell-mediated immunity that may predispose to bacterial superinfection, allowing oral commensals to become pathogens [3]. Subsequent development of a retropharyngeal abscess invading the space between the alar fascia and the prevertebral fascia of the neck creates direct access to the mediastinum and the pleural spaces, causing DNM, frequently associated with bilateral pleural empyema.
A literature review revealed only eight reports of DNM related to EBV infection (Table 1). 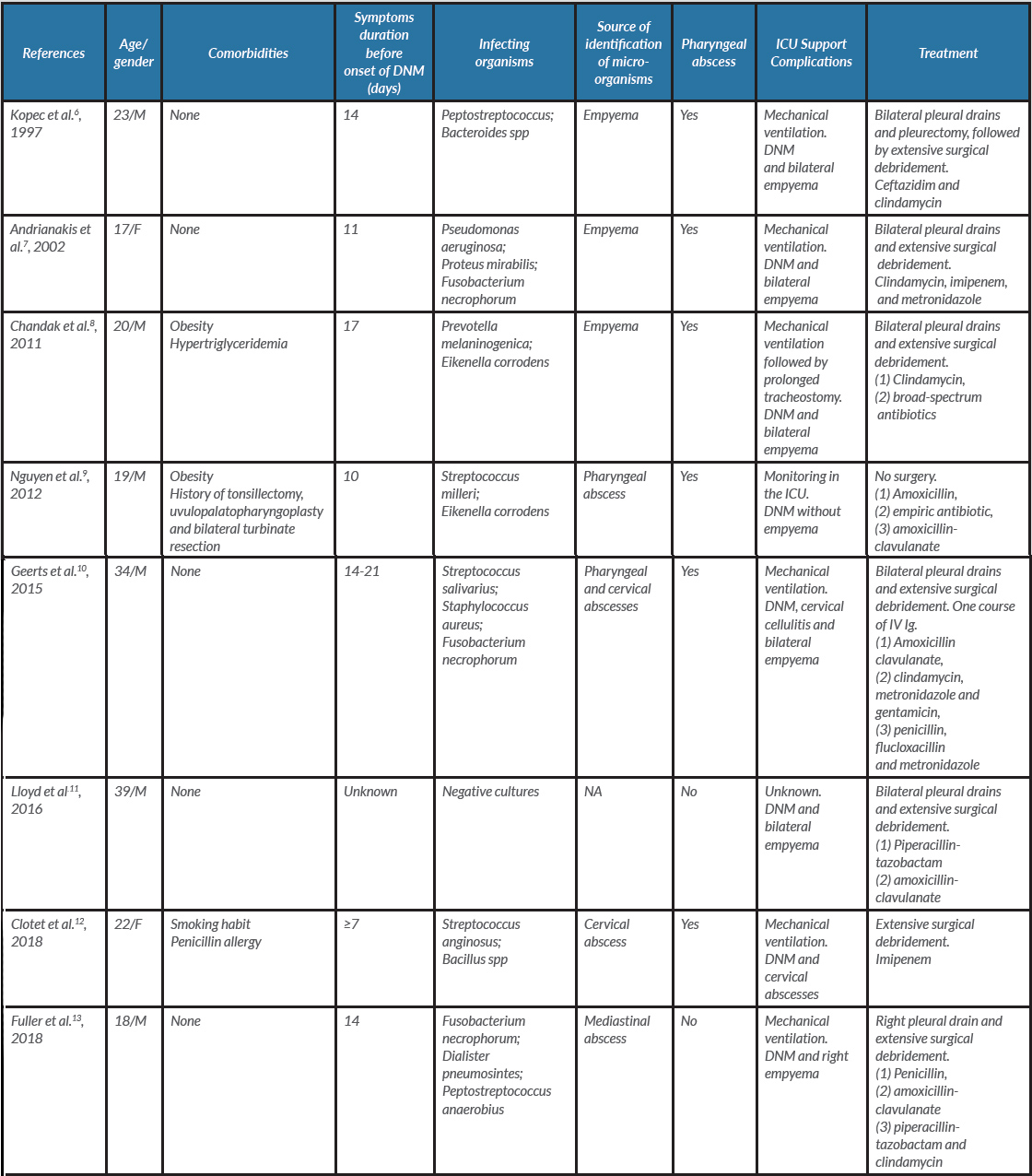 There were numerous similarities between the cases: all patients were young (17–39 years old) and previously well and survived despite the high mortality rate usually observed in DNM. Also, anaerobic microorganisms of the oropharyngeal flora were identified in all surgical samples, and most patients who developed sepsis and required intensive care had evidence of pharyngeal abscess invading the mediastinum.
Our patient’s case differs in two respects: first, this is the only reported case in which blood cultures were successively positive with two different micro-organisms of the commensal oral flora; second, to our knowledge, this is the first report of an association between RHS and descending mediastinitis as concomitant complications of acute EBV infection. Indeed, according to the HScore developed by Fardet et al. in order to distinguish RHS from other diseases such as haematological malignancies, our patient had an 80% probability of RHS (190 points), which would have risen to 97% if the bone aspirate had shown hemophagocytic features [4]. The excellent clinical and biological responses to the surgical and antibiotic treatment do not rule this hypothesis out, as up to 60% of infectious RHS spontaneously regress with organ support and anti-infective therapy, without the need for immunomodulatory or immunosuppressive medication [5].