Conflicts of Interests: The authors declare there are no competing interests.
Acknowledgements: This patient was supported by the Department of Internal Medicine guided by Dr Marzouk Sameh and Dr Derbel Abir. We thank the Ophthalmology Department for assistance and Professor Zouhir Bahloul for comments that greatly improved the manuscript.
This article is licensed under a Commons Attribution Non-Commercial 4.0 License

The coexistence of two immune-mediated diseases in the same patient is unusual. Takayasu’s arteritis (TA), which is a chronic granulomatous vasculitis, was discovered in a 47-year-old woman followed for tubulointerstitial nephritis and uveitis syndrome (TINU syndrome). We present the first case of this association.

Takayasu’s arteritis (TA) is a chronic vasculitis of unknown aetiology which primarily affects the aorta and its main branches. It can be associated with autoimmune diseases such as rheumatoid arthritis [1], inflammatory bowel disease [2], ankylosing spondyloarthritis [3], chronic thyroiditis [4], granulomatosis and polyangiitis, which suggests that TA itself may also be an autoimmune disease [1]. To our knowledge, TA occurring in association with tubulointerstitial nephritis and uveitis syndrome (TINU syndrome) ha snot previously been described in the literature. We report the first case of this association.

A 47-year-old woman was admitted to hospital in 2008 for anterior uveitis of the right eye. She had no past medical history. She had experienced eye pain and redness for 15 days. She did not have fever or other symptoms. She had normal blood pressure of 130/80mmHg in both arms. There were no vesicularbreath sounds. Ophthalmological examination showed low visual acuity of 6/10 in the right eye.Granulomatous keratic precipitates were evident on slit lamp examination. The left eye was normal. Biological analysis showed renal failure (creatinine 123 µmol/l) and an inflammatory syndrome (erythrocyte sedimentation rate 100 mm/1st hour, C-reactive protein 52 mg/l). Calcemia, phosphatemiaand liver function were normal. Angiotensin-converting enzyme assay was normal. Urinary analysis revealed proteinuria (0.9g/24 hours) and sterile pyuria. Viral, fungal and bacterial investigations (cytomegalovirus, Epstein-Barr virus, hepatitis B and C virus, syphilis, toxoplasmosis and tuberculosis) were negative. Rheumatoid factor, anti-nuclear antibodies and HLA-B27 were negative. Chest radiography was normal. Salivary gland biopsy was normal. Renal ultrasound showed normal echogenicity and morphology.
Kidney biopsy revealed chronic active interstitial nephritis with infiltration by mononuclear cells and mild fibrosis (Fig. 1). Granulomas were absent. Glomeruli and tubular structures were normal. Immunofluorescence showed positive linear staining of the tubular basement membrane for C3, IgG, IgM and IgA.

TINU syndrome was diagnosed. The patient was started on pulses of methyl prednisolone;high doses of prednisone were administered for 6 weeks and then tapered to10 mg a day. This treatment was accompanied by ocular corticosteroid and mydriatic eye drops. By the end of this regimen, renal function had improved (creatinine 73µmol/l) and uveitis had resolved. Two years later, ocular redness and pain recurredand anterior uveitis relapse was diagnosed. The patient experienced joint pain. Physical examination revealed asymmetrical blood pressure (120/70 mmHg in the right arm and 100/60 mmHg in the left arm) and a decreased left brachial artery pulse. The patient was asymptomatic. Inflammatory markers were positive and includedan elevated erythrocyte sedimentation rate (140 mm/1st hour) and C-reactive protein levels (33 mg/dl). Renal function was normal. Ultrasound with colour Doppler identified homogeneous and echogenic wall thickening of the left common carotid artery. Computed tomography revealed bilateral circumferential and regular wall thickening of the internal carotid arteries, predominantlyof the right artery (Fig. 2). 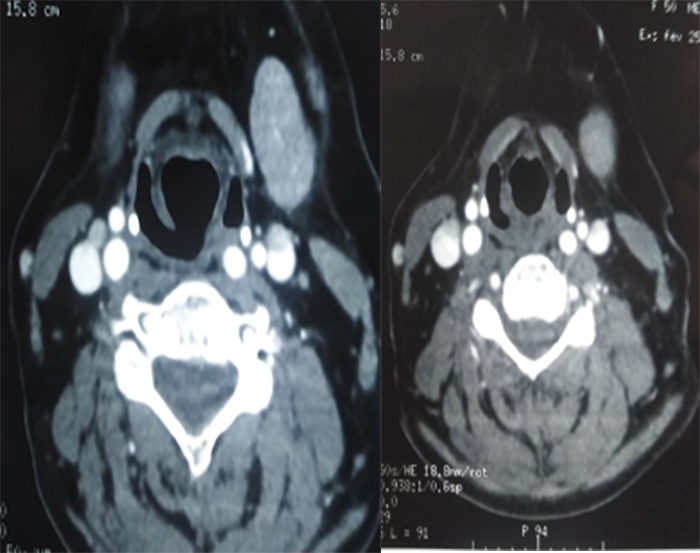 TA was diagnosed. Anterior granulomatosis uveitis was identified without kidney disorder. High doses of oral prednisone (1mg/kg/day) accompanied by anti-platelet therapy were started. Inflammatory parameters normalized within 6 weeks. Prednisone was gradually reduced to a maintenance dose of 10 mg/day. At follow-up, 6 years later, the patient was still asymptomatic and computed tomography assessment was unremarkable.

TINU syndrome is defined asacute interstitial nephritis associated with uveitis in the absence of systemic disease that can cause either interstitial nephritis or uveitis [5]. It manifests with non-specific signs and specific symptoms of renal disease and ocular involvement. The diagnostic criteria for TINU syndrome were described in 2001 by Mandeville et al.[5]. Clinical features of ocular disease are less defined than those of renal disorder. Bilateral anterior granulomatous uveitis can occur with or without intermediate or posterior uveitis. Ocular disease was bilateral in 77% of cases and unilateral in 23%.
Our patient had anterior unilateral granulomatous uveitis. Her diagnosis of renal disorder was based on abnormal renal function findings, abnormal urine analysis results (low-grade proteinuria, urinary eosinophils, pyuria or haematuria without infection, increased beta-2 microglobulin), and systemic illness lasting more than 2 weeks associated with histopathological findings of tubulointerstitial nephritis. Renal failure and abnormal urinary analysis suggested a kidney biopsy, which revealed active interstitial nephritis. Uveitis is diagnosed after interstitial nephritis in 65% of patients, before interstitial nephritis in 21% and at the same time in 15% [5]. In our case, ocular manifestations and renal disorder developed simultaneously. Ocular prognosis appears to be good in such patients. Persistent renal dysfunction was described in 11% of cases [5]. Recurrence of uveitis in TINU syndrome has been frequently reported (56% of patients) [5]. Relapse can occur up to 2 years after the initial uveitis [5], which was the case in our patientwho represented after 2.5 years without renal disorder.
TAis a granulomatous vasculitis affecting largevessels and causinggeneralized and vascular symptoms. Its manifestations range from impalpable pulses or arterial bruits in an asymptomatic patient to life-threatening neurological manifestations. The diagnosis is based on the diagnostic criteria of Ishikawa modified by Sharma et al. [6]. In our patient, the diagnosis of TA was suspected in light of asymmetrical blood pressure, a decreased left brachial artery pulse and high inflammatory markers, and confirmed by imaging findings. However, we couldnot conclude definitely that the uveitis was caused by TINU syndromeas in this context it could be an uncommon manifestation of TA.Uveitis was first reported as an ocular manifestation of TAby Stone et al. [7]. The more common ocular manifestation of TA include episcleritis and Takayasu’s retinopathy (four stages) [8–13]. Corticosteroids are effective for both uveitis and TA.

In our case, TA was discovered incidentally in a patient followed for TINU syndrome, demonstrating thatrare autoimmune diseases can coexist. Consequently, thorough physical examination and investigation is very important. To our knowledgethis is the first such case described in the literature.