How to cite this article: Vermeersch S, Poppe K, Unuane D, Velkeniers B. Postoperative treatment in a patient after hemithyroidectomy: the therapeutic challenges of a hidden thyrotropinoma. EJCRIM 2015;2:doi: 10.12890/2015_000217

Aknowledgements: The authors declare they have patient's permission.

Objectives: We report the unusual case of a patient with a thyrotropinoma, discovered after a hemithyroidectomy for a suspicious thyroid nodule, and its therapeutic challenges.

Conclusion: The diagnostic approach to the thyroid nodule should include a detailed clinical and biochemical examination. Initial biochemical evaluation by TSH alone does not allow detecting inappropriate TSH secretion that may increase the risk of thyroid malignancy. In case of a thyrotropinoma, the ideal treatment consists of combined care of central and peripheral thyroid disease.

Thyrotropinoma (TSH-oma) are thyrotropin-producing adenoma of the pituitary gland representing <2 % of all pituitary tumors. Due to the increased routine measurement of thyroid function tests and imaging techniques, these adenomas are recognized with increasing frequency[1]. Diagnosis is based on hormonal evaluation such as inappropriate thyroid-stimulating hormone (TSH), magnetic resonance imaging (MRI), and the absence of a familial context of increased thyroid function tests. The main differential diagnosis includes the syndrome of thyroid-hormone resistance (RTH), a diagnosis which is suggested by a familial context; the absence of a pituitary adenoma; and the presence of a mutation in the thyroid-hormone receptor beta (TR-beta). Treatment of TSH-oma involves transsphenoidal resection and/or medical therapy with long-acting somatostatin analogs[2].
Thyroid nodules are common in the general population (palpable nodules range from 4 to 7% versus incidental ones on ultrasonography, which range from 19 to 67%). The majority is asymptomatic, but because 5% turn out to be malignant, further assessment is necessary. This evaluation includes a (familiar) history; a physical examination; the measurement of TSH (calcitonin is controversial); an ultrasonography with fine needle aspiration cytology (FNAC); and, in the case of more nodules and/or suppressed serum TSH, a scintigraphy[3]. Levothyroxine (LT4) treatment is often given to patients that have undergone a hemithyroidectomy, in order to prevent contralateral goitre and/or nodularity regrowth. Evidence for this approach remains, however, scarce in literature[4].
The association of a thyrotropinoma and a cold thyroid nodule is rare and the few cases that have been described are associated with a higher risk of malignancy (doubling of the odds of thyroid cancer in elevated TSH versus normal range TSH)[5,6,7].

Case: A 47-year-old man presented with a history of tremor, transpiration, diarrhea and weight loss. The personal medical history was limited to a knee intervention and there was no family or personal history of thyroid or pituitary diseases. At physical examination, blood pressure was 120/80 mmHg and heart rhythm was regular at 87 bpm. Palpation of the neck revealed a thyroid nodule on the right side, which was mobile and soft, without associated lymph nodes. A bilateral rest tremor was noted in both hands.
Investigations: Thyroid function tests showed a normal serum TSH of 1.51 mIU/L (ref: 0.27 – 4.20 mIU/L); increased fT4 of 20.6 ng/L (ref: 9.3 – 17.0 ng/L); and triiodothyronine (fT3) of 4.8 ng/L (ref: 2.6 – 4.4 ng/L). All types of thyroid antibodies were negative and the other pituitary hormones were within normal ranges. Neck ultrasonography revealed a unilateral right goiter of 15 ml, with a nodule measuring 2.3cm in diameter that was not functional on scintigraphy. A subsequent FNAC showed a Bethesda classification “4”. An intravenous TRH test revealed a normal TSH response. Genetic analysis with determination of the most frequent mutations in the THR-beta was negative. MRI of the pituitary showed an intrasellar adenoma of 3 mm (Figs. 1 and 2).
Differential diagnosis: Because thyroid tests were compatible with an inappropriate TSH secretion, the differential diagnosis included thyrotropinoma and RTH. The clinical features of hyperthyroidism, the normal thyroid function tests in first degree relatives (parents and brother), together with the additional abovementioned investigations, lead us to the final diagnosis of thyrotropinoma. 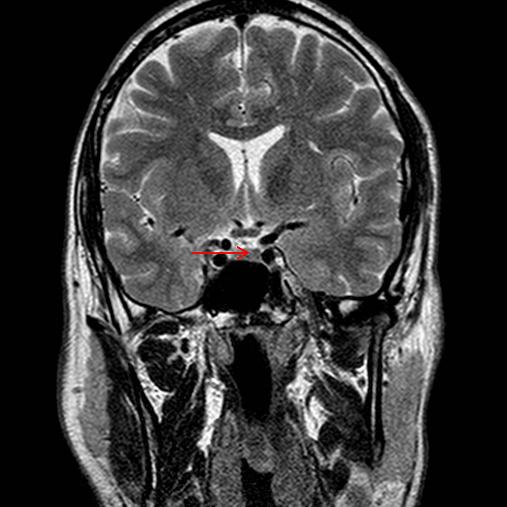 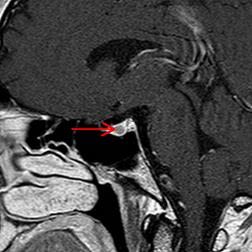 Treatment: The patient underwent a hemithyroidectomy and received 100 mcg LT4 post-intervention in order to prevent goiter formation on the left side[4]. This treatment is standard at our institution, however it exacerbated hyperthyroid symptoms. Thyroid supplements were thus promptly interrupted by the attending endocrinologist. Two months later, thyroid function ameliorated, but hyperthyroidism persisted and the therapeutic options to treat the thyrotropinoma were discussed with the patient. Anatomopathology revealed a benign follicular adenoma. Taking into account the patient preference for medical therapy, a long-acting somatostatin analogue was initiated with good clinical and biological response.

Table 1: Evolution of thyroid function tests, before and after LT4/somatostatin treatment.

In this case, the patient was thyrotoxic with an elevated fT4, but with a normal TSH. This is not the typical hyperthyroidism presentation. Therefore, a central hyperthyroidism due to thyrotropinoma was suspected, but it is important to make the differential diagnosis with thyroid hormone resistance[2].
Thyroid nodules are common in the general population and are usually detected due to regional symptoms or are increasingly discovered fortuitously during examinations performed that are unrelated to thyroid symptoms. Risk factors for thyroid nodules are numerous and include a combination of exogenous risk factors such as radiation, pollutants, iodine deficiency, as well as endogenous risk factors like genetic susceptibility, and growth factors such as serum TSH and IgF-1[7,8]. In the present case, the suspected long-standing high/normal serum TSH might have stimulated nodular thyroid development, as suggested by previous but scarce reports in literature.
The ideal order of treatment of thyroid nodules with a concomitant TSH-oma still remains undefined. Some authors suggest that management of the TSH-oma should precede that of thyroid nodularity. A major concern, indeed, is that thyroidectomy may trigger pituitary adenoma growth due to a positive feedback mechanism[6,9,10].
Although our patient had a biological profile of inappropriate TSH secretion at the first visit, we decided to give priority to a hemithyroidectomy on the basis of cytology on the one hand, and on the basis of increased risk of thyroid cancer reported in this setting on the other hand. We acknowledge the low evidence in literature of this decision, which was based largely on clinical case reports. In the post-operative phase, the patient received LT4 treatment in order to prevent long-term goiter and nodularity on the left side. The rationale for this approach is based on limited data in literature, such as the retrospective study by Alba et al[4]. In this study, in the LT4-treated group, the recurrence rate of nodular disease was significantly lower (~ 20%) compared to the recurrence rate in the group not receiving LT4 (64.4%); the mean observation period was 5.8+/-4.7 years.
In case of THR, LT4 treatment might have decreased the serum TSH (although in much higher doses than 100 μg), but in this particular case of TSH-oma, it also aggravated hyperthyroid symptoms. Therefore, the routine treatment with a fixed dose of LT4 after hemithyroidectomy should be re-evaluated in the precise clinical and biological context that can only be identified by initial evaluation, and which includes not only TSH but also peripheral thyroid hormone levels, with at least the measurement of fT4.
The association of TSH-oma and cold thyroid nodule is rare, but previous data suggest an increased risk of thyroid cancer[5,6,7] in these cases. Although this association remains pathophysiologically sound, more clinical data are needed to reveal the relevance of this data. In the meantime, long-standing thyrotropinoma and thyroid cancer development remains speculative. A hypothetical explanation is the effect of the unbalanced hypersecreted alpha-subunit in TSH-oma, playing a proliferative role (via cyclic adenosine monophosphate, known as cAMP) in tumor growth. Furthermore, a concomitant growth hormone secretion may influence tumor growth[2]. Most cases with TSH-oma and thyroid nodules have been described in women, suggesting a potential role of estrogens in thyroid carcinogenesis[6,8].
In the presence of a pituitary adenoma secreting TSH, the first line treatment is transsphenoidal resection, or medical therapy with somastostatin analogs, in order to reduce serum TSH and alpha-subunit secretion and normalize thyroid function. This strategy reduces goiter volume in 20% of cases. Tolerance of medical therapy is usually good, but transient gastro-intestinal side effects have been recorded[2]. Follow-up of our patient will include pituitary MRI and echography of the left thyroid lobe.

In conclusion, a thyroid nodule approach should include a detailed clinical examination, with special emphasis on the presence of clinical symptoms of hyperthyroidism. Initial biochemical thyroid evaluation by TSH does not allow for the detection of inappropriate TSH secretion, which may increase the risk of thyroid malignancy. In case of TSH secreting pituitary adenoma, the ideal treatment likely consists of a combined treatment, involving the treatment of central and peripheral thyroid disease.