Ceftriaxone is a third-generation antibiotic much used in clinical practice. It has a wide spectrum of activity and an attractive safety profile. It is mostly prescribed empirically and for an average duration of 10.3 days[1]. Ceftriaxone is regarded as first-line therapy in the empirical treatment of bacterial meningitis.
Non-chemotherapy drug-induced agranulocytosis is a rare and severe adverse reaction characterized by a decrease in the peripheral neutrophil count to less than 0.5×109/l [2]. It may occur with various analgesics, psychotropics, anticonvulsants, antithyroid drugs, antihistamines, antirheumatic drugs, GI drugs, antimicrobials and cardiovascular drugs. Direct damage to the bone marrow microenvironment or myeloid precursors is frequent. However, immune-mediated mechanisms are also associated with some drugs such as penicillins, which act as haptens and induce antibody formation against neutrophils in a dose-dependent inhibition of granulopoiesis [3].
Ceftriaxone-induced agranulocytosis has been previously described in a few clinical reports. Treatment of drug-induced neutropenia includes drug withdrawal, antibiotic coverage when appropriate, and administration of recombinant human granulocyte colony-stimulating factor (rhG-CSF) [3]. The use of haematopoietic growth factors is associated with a faster neutrophil count recovery, although a statistically significant impact on mortality could not be identified [2]. Older patients, those with lower neutrophil counts and those with bacteriemia or shock at diagnosis have a worse prognosis. The mortality rate has recently decreased from 10–16% to 5%, probably because of earlier recognition and better management of this condition [4].

A 70-year-old female patient with a previous diagnosis of hypertension, dyslipidaemia and obesity was admitted to the emergency department with fever and a new-onset seizure. Blood analysis showed elevated inflammatory parameters (leukocytes 19.330×109/l, neutrophils 18.000×109l/l, C-reactive protein 337 mg/l). Brain CT was normal, while analysis of the cerebrospinal fluid revealed marked pleocytosis of 5943 cells/mm³ (88% polymorphonuclear), hypoglycorrhachia of 1.6 mg/dl and hyperproteinorraquia of 1217 mg/dl. Bacterial meningitis was assumed and the patient started ceftriaxone empirically 2 g twice a day, in accordance with established guidelines. Invasive mechanical ventilation was needed because of persistently depressed consciousness and non-convulsive status epilepticus was diagnosed. Once the patient recovered consciousness, left-sided hemiparesis was noted and a brain MRI was performed, which revealed a brain abscess in the right temporal lobe measuring 36×35×24 mm. As cerebrospinal fluid and blood cultures isolated Streptococcus pneumoniae, ceftriaxone therapy was prolonged and the neurological deficits resolved. On the 29th day of ceftriaxone therapy, the patient presented fever and extensive dispersed folliculitis. A complete blood count revealed severe agranulocytosis of 0.1×109/l. Drug-induced medullary toxicity was suspected and so ceftriaxone was withheld. The patient began granulocyte stimulation with filgrastim and new blood cultures were obtained. Neutropenic fever was diagnosed and antibiotic coverage with meropenem and vancomycin was started. Figure 1 shows the evolution of the neutrophil count. 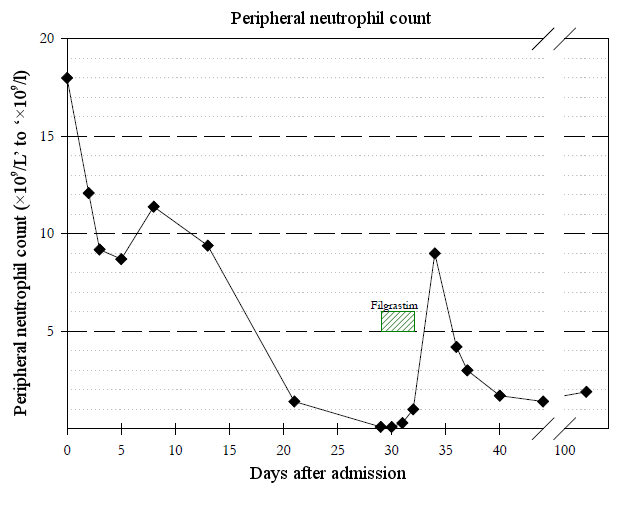 After just 24 hours, the patient was afebrile, skin lesions had remitted and neutrophil counts began to rise. After 3 days of filgrastrim administration, neutrophil counts were sustainably above 1×109/l, blood cultures were sterile, and vancomycin was discontinued. The patient continued meropenem for 45 days until brain abscess resolution was documented by brain MRI.

Ceftriaxone-induced agranulocytosis is a rare entity, even though ceftriaxone is a widely used antibiotic. Evidence in the literature shows that it is a dose-dependent adverse reaction and usually occurs after generous cumulative doses.
Andersohn et al. carried out a systematic review of non-chemotherapy drug-induced agranulocytosis. Of the 492 reported cases classified as probable or definite, only six were related to ceftriaxone, and in none of these was the drug considered the definite cause [2]. Neftel et al. reviewed 50 beta-lactam-induced neutropenia cases from 17 hospitals, six of which were related to ceftriaxone. On average, the neutrophil count decreased around the 21st day of treatment with a mean cumulative dose of 51 mg (±29 mg) [5].
Once diagnosed with a brain abscess, the patients needed prolonged courses of antibiotics. Only after a cumulative dose of 116 g of ceftriaxone did our patient display signs of neutropenia, although a review of her blood count results showed that peripheral neutrophils were already quite low on the 21st day of therapy. This finding suggests that blood counts should be reassessed more frequently.
The Naranjo score is used to assess the probability of an adverse drug reaction [6]. The score for our patient was 4 and was interpreted as a possible adverse drug reaction, although most of the score items were ‘Unknown’ or ‘not done’ (Table 1). As we had an alternative and equally effective antibiotic, it would have been unethical, instead of discontinuing it, to retry or reduce the dose of ceftriaxone in order to check causality. Some previous reports described bone marrow examination. However, as our patient recovered very rapidly, bone marrow assessment would not have been useful and so was not performed. 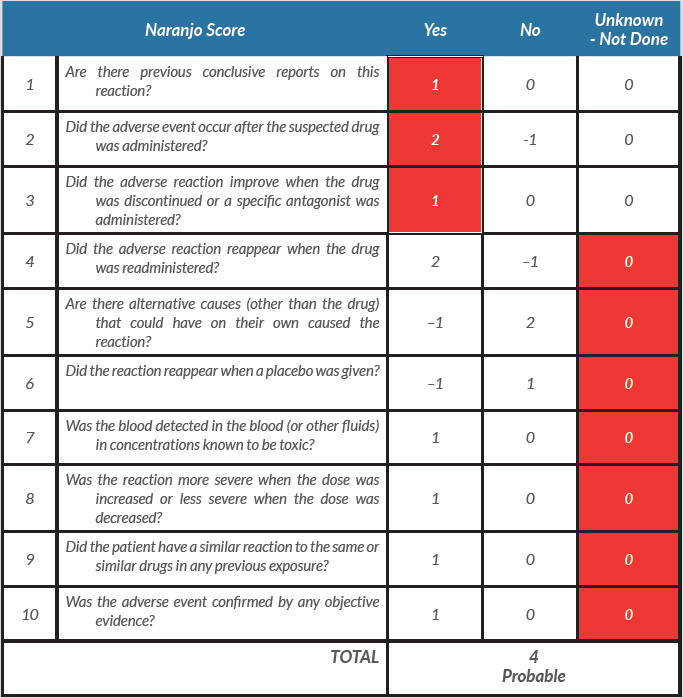 Table 1. The Naranjo criteria used to classify the probability that an adverse event is related to drug therapy based on a list of weighted questions. The adverse drug reaction is assigned to a probability category from the total score as follows: definite if the overall score is 9, greater probability if the score is 5–8, possible if the score is 1–4, and doubtful if the score is 0