Conflicts of Interests: The authors declare there are no competing interests.
Acknowledgments: We thank Dr Donatella Kettlewell for her careful proofreading of the manuscript.
This article is licensed under a Commons Attribution Non-Commercial 4.0 License

We report the case of a 76-year-old man presenting with reactive haemophagocytic lymphohistiocytosis (rHLH) in the setting of disseminated prostate cancer. This often fatal syndrome must be diagnosed early in order to maximize survival. Treatment should be initiated whenever the clinical diagnosis is suspected, even if the HLH-2004 criteria are not met. The HScore is a useful diagnostic tool for rHLH. In case of neurological symptoms, an extensive assessment must be performed. The goal of this case report is to raise awareness of this rare syndrome among oncologists.

Haemophagocytic lymphohistiocytosis is a rare syndrome characterized by high mortality and polymorphic presentation, especially in adults. Very few case reports describing the association of rHLH and prostate cancer have been published [1, 2]. We describe a clinical case demonstrating this association in order to raise awareness of the syndrome among oncologists.

A 76-year-old man presented to the emergency department in November 2020 with shortness of breath, chest pain and severe pancytopenia (haemoglobin 5.6 g/dl, platelets 38,000/μl, leucocytes 3360/µl with lymphocytes 170/µl). Myocardial infarction was rapidly ruled out (normal ECG and troponin value). Blood tests demonstrated increased lactate dehydrogenase (LDH 718 U/l, normal value <480), hyperferritinaemia (45,000 ng/ml, normal range 20–300) and hypertriglyceridaemia (2.17 mmol/l, normal value <1.5). A chest-abdomen CT scan showed disseminated bone lesions, left pleural effusion and lymphadenopathy above and below the diaphragm. The patient was hospitalized and received two units of red blood cells (RBC). The patient had been diagnosed with prostate adenocarcinoma (Gleason 8, classified pT3b) in 2007. Radical prostatectomy had been performed in France followed by radiotherapy and hormonal castration (bicalutamide and goserelin). In 2017, he was sequentially treated for bone metastases with docetaxel and cabazitaxel. Medical castration was interrupted in 2018. In 2019, radiotherapy and brachytherapy were administered for loco-regional disease relapse. Finally, 1 month before admission, in September 2020, the patient had received, still in another institution, a first cycle of cabazitaxel as rechallenge in combination with leuprorelin.
His medical history included atrial fibrillation, Bouveret’s disease, hypertension, past tobacco use, coronary heart disease and a recent deep vein thrombosis with pulmonary embolism. Current medications were tinzaparin and verapamil.
The patient was an active businessman, living at home with his wife, and playing tennis until a few weeks before hospitalization. He had a concerning G8 score of 13/17 (due to recent loss of appetite and weight). The physical examination upon admission was normal except for the presence of fever (38.4°C), a fixed palpable lymphadenopathy in the inguinal region and left lung dullness to percussion with reduced tactile fremitus. The differential diagnoses proposed were cancer progression with massive medullary involvement, sepsis, rHLH, Evans syndrome or an acute malignant haemopathy. A bone marrow smear excluded malignant haemopathy while suggesting the presence of malignant cells. The bone marrow biopsy confirmed extensive medullary involvement with prostate adenocarcinoma cells. A complete bacterial and viral testing panel came back negative, except for low parvovirus-B19 DNA positivity, which justified the administration of intravenous immunoglobulins.
According to the HLH-2004 criteria [3], this presentation was compatible with rHLH (elevation of sCD25, fever, hyperferritinaemia, bicytopenia, hypertriglyceridaemia and low NK cell activity). Furthermore, the HScore [4] was 198, indicating an 86.8% probability of an rHLH diagnosis. The patient received induction therapy with etoposide (150 mg/m2 twice a week for 2 weeks then once weekly for 6 more weeks) and dexamethasone (tapering course starting at 10 mg/m2 a day). Meanwhile, prostate-specific hormonotherapy was initiated with degarelix and enzalutamide on days 8 and 11, respectively, after presentation.
The induction therapy for rHLH was completed for the entire 8 weeks except for two etoposide injections (weeks 6 and 7 as the patient presented with haemodynamically unstable tachyarrhythmia). This treatment resulted in a lower transfusion burden (RBC and platelets had been given biweekly for the first 5 weeks) and the patient was able to leave hospital. However, he experienced an epileptic seizure at home 2 days after the last etoposide administration. An extensive neurological assessment was performed with cerebral spinal fluid analysis (normal) and brain magnetic resonance imaging (chronic ischaemic stroke in the right temporal lobe) with no suggestion of a neurological form of rHLH. The seizure was therefore considered a side effect of enzalutamide.
The patient gradually improved. PSA response has been confirmed and the patient continues treatment with degarelix and enzalutamide in outpatient clinics.

The association of rHLH with malignant haemopathy is well established. However, the novelty of this case lies in the association of rHLH and prostate cancer, which has been rarely described.
Monitoring of treatment efficacy was complex in this case for three reasons. First, prostate-specific antigen (PSA) levels were so high that the sandwich ELISA test lost its sensitivity due to the prozone or hook effect [5] until the 8th week. Second, there were multiple possible causes of pancytopenia (bone marrow metastatic invasion, rHLH and etoposide itself). And third, the ferritin level fluctuated, eventually stabilizing at around 3000 ng/ml.
To our knowledge, this is the first reported association of rHLH and prostate cancer treated with the combination of etoposide and dexamethasone. In previously published cases, the diagnosis was based on biological findings (bicytopenia, cytolysis, elevated LDH and ferritin levels) with demonstration of macrophages in bone marrow aspirate [1, 2]. Since the HLH-2004 study [3], clinical and biological criteria have been used to diagnose rHLH. However, that study was based on a paediatric population. Therefore, we established our diagnosis of rHLH on the basis of the HScore [4] because it has been validated in an adult population (cut-off value: 169, sensitivity 93% and specificity of 86%). This score (Table 1) includes clinical criteria (pyrexia, organomegaly), pharmacological criteria (immunosuppression), biological criteria (cytopenia, ferritin, triglyceride, fibrinogen and transaminase levels) and medullary criteria (haemophagocytosis in bone marrow aspirate). Interestingly, we could not demonstrate haemophagocytosis in this patient, but this sign is neither pathognomonic nor necessary to confirm a diagnosis of HLH.
In conclusion, we hope to raise awareness among medical oncologists about this syndrome, since prompt diagnosis and management are essential. Some major red flags should help suggest this entity (Table 2). Importantly, neurological involvement should always be excluded, and we emphasize the need to treat underlying triggers of rHLH in addition to the inflammatory dysregulation itself. 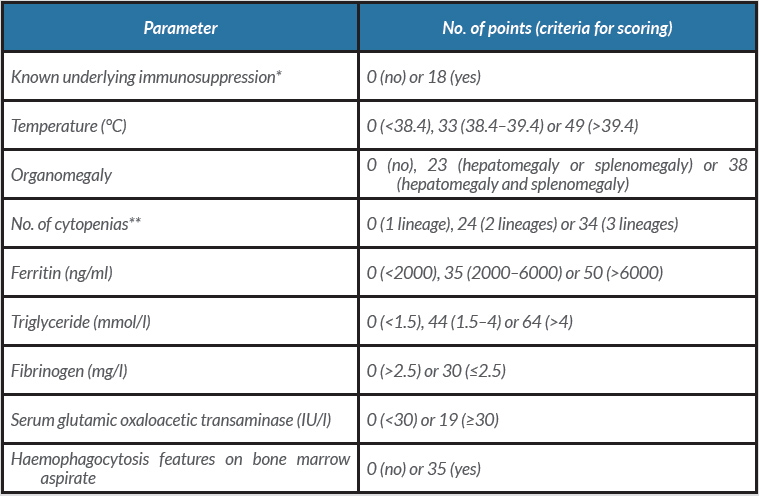 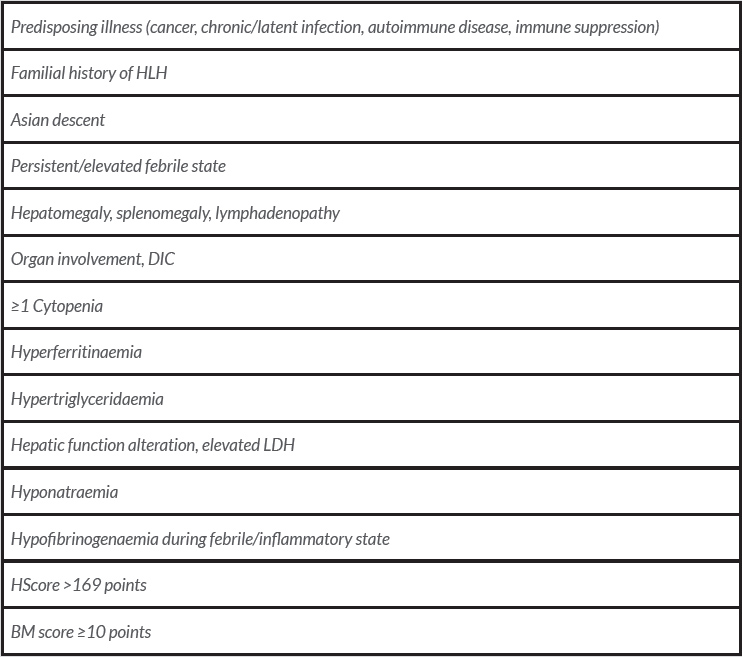 Table 1. The HScore, from Fardet et al. [4]
* Human immunodeficiency virus positive or receiving long-term immunosuppressive therapy (i.e., glucocorticoids, cyclosporine, azathioprine).
** Defined as a haemoglobin level of ≤9.2 mg/dl and/or a leucocyte count of ≤5000/mm³ and/or a platelet count of ≤10,000/mm³