Zinner syndrome is a developmental anomaly of the urogenital tract. This condition is defined by the triad of unilateral renal agenesis, ipsilateral seminal vesicle cyst and ipsilateral ejaculatory duct obstruction. The syndrome is due to malformation of the mesonephric duct during embryogenesis. The condition used to be rare but is now frequently encountered due to the advent of MRI and CT. MRI confirms the diagnosis by revealing the seminal vesicle cyst and its contents, and the ejaculatory duct obstruction, while CT confirms renal agenesis. We report the case of a young patient with Zinner syndrome.

We report a case of Zinner syndrome which is a rare congenital malformation of the seminal bladder and the ipsilateral upper urinary tract. Described for the first time in 1914 by Dr Zinner, it is increasingly seen due to the use of CT and MRI [1].

We report the case of a 24-year-old man who was referred to the radiology department for a CT urogram because of non-visualization of the left kidney associated with a cystic formation in the left vesicle. The patient’s history was negative for signs of urinary tract disorder or haemospermia.
Clinical examination revealed asymmetry of the scrotum, without any particular sign. We performed a CT urogram which showed absence of the left kidney and, behind the bladder, a left pelvic lesion which was discreetly hyperdense and not enhanced after contrast agent administration (Figs. 1 and 2). The examination was complemented by a pelvic ultrasound (Fig. 3), which showed asymmetrical testicles and a lobulated multiloculated cystic formation in the pelvic region behind the bladder with heterogenous content.
The findings were thought to be due to a malformation (Zinner syndrome), so an abdominopelvic MRI was performed with a 1.5-T scanner. MRI showed a laterally located cystic lesion in the region of the left seminal vesicle, which was hyperintense on T1-weighted images with an intermediate signal on T2-weighted images, suggesting a haemorrhagic cyst (Fig. 4). We noted obstruction of the right ejaculatory duct as well as a hypoplastic right testicle with a dilated permeative left ejaculatory duct (Fig. 5).
The diagnosis of Zinner syndrome was established and the patient was referred to the urology department for follow-up. 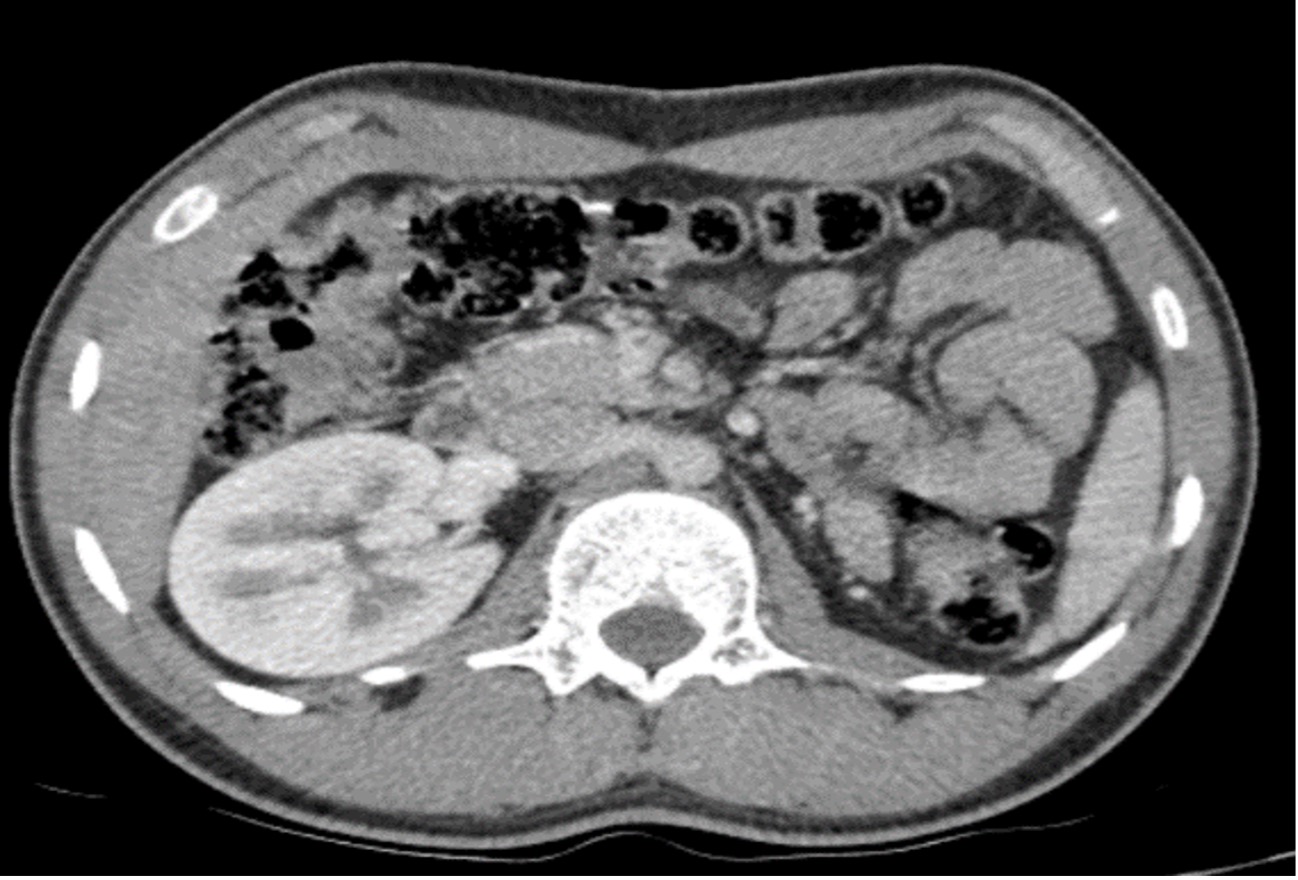 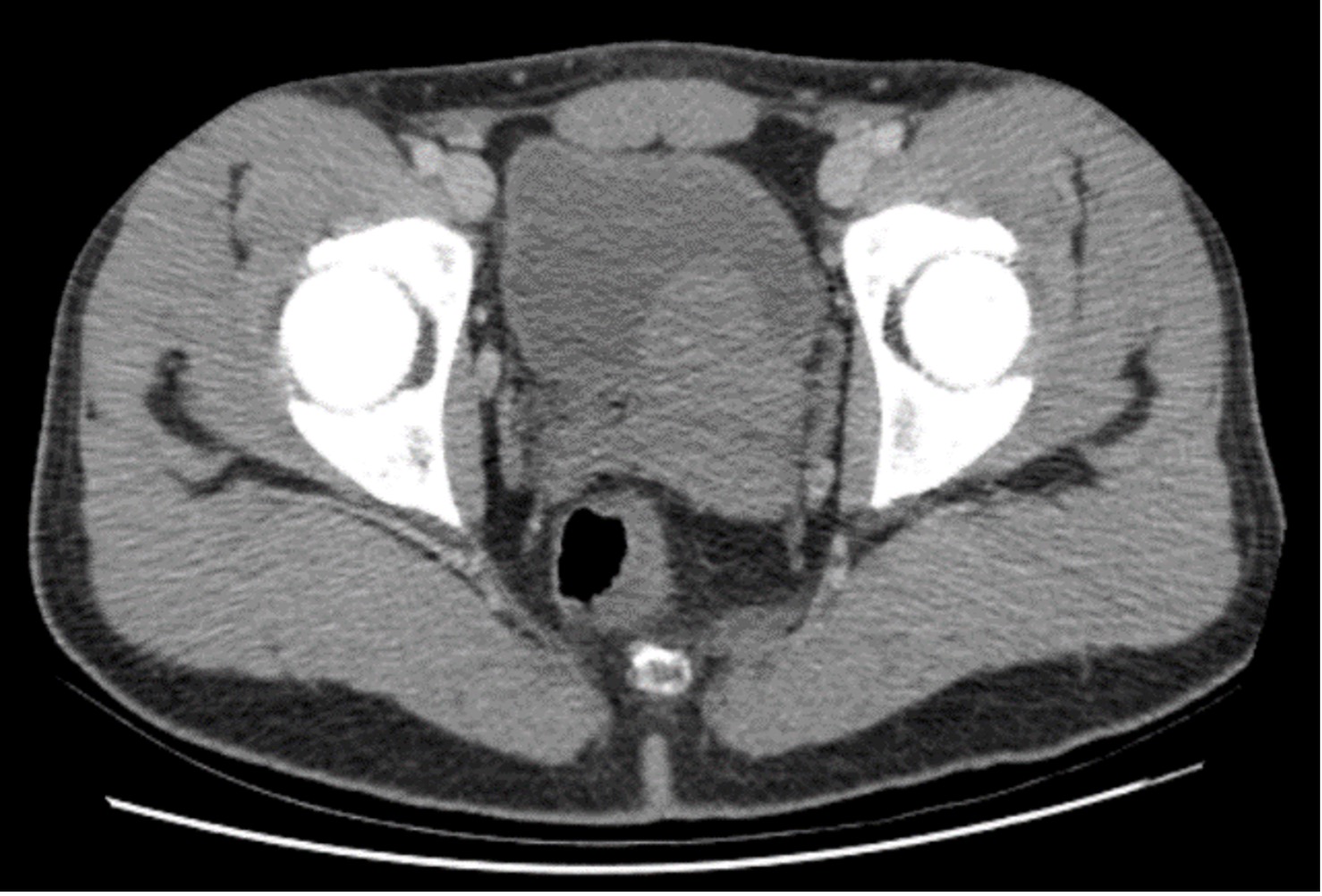 Zinner syndrome is a rare congenital malformation of the urogenital tract and characterised by the triad of a seminal vesicle cyst, obstruction of ejaculatory ducts and ipsilateral renal agenesis. Fewer than 200 cases have been reported in the literature [2]. It is often incidentally discovered between the second and fourth decades of life, the period of greatest sexual and reproductive activity. However, the syndrome is being increasingly detected at younger ages due to the advent of CT and MRI.
This male condition is equivalent to the female Mayer-Rokitansky-Kuster-Hauser syndrome. It results from lack of development of the distal mesonephric duct or Wolffian duct during the fifth week of embryogenesis. The mesonephric duct in men gives rise to half of the trigone, the bladder neck, urethra, seminal vesicle, vas deferens, epididymis and epididymal heads under the influence of testosterone and anti-Müllerian hormone. Thus, any insult during embryogenesis could at the same time affect the formation of the kidney, ureter, seminal vesicle and vas deferens [3]. This syndrome is usually asymptomatic and discovered incidentally. When symptomatic, clinical signs can include dysuria, perianal or hypogastric pain (if the cyst is large), haemospermia, epididymitis or infertility. When such cysts are large, they cause hypogastric pain and are palpable on rectal examination [4].
Imaging plays an important role in the diagnosis of this syndrome. Abdominal ultrasound reveals the cystic nature of the mass, its size and location, and confirms the integrity of the bladder and the absence of the ipsilateral kidney. Transrectal ultrasound provides more information about the wall of the cyst and its contents (its echogenicity and the presence or not of loculi). It also guides the surgeon in case of transrectal resection of the cyst. CT urogram confirms the absence of the kidney and ipsilateral ureter but cannot usually confirm the origin of the cyst.
MRI is the gold standard as it confirms the diagnosis and can also analyse the cyst contents which are normally hypointense on T1 and hyperintense on T2 when they are pure liquid. The cyst signal may vary depending on its contents and in some cases, the presence of spontaneous hyperintense content on T1 is not related to haemorrhagic content or hyperproteic content as was the case with our patient. It also allows more complete analysis of the glands and can confirm obstruction of the ejaculatory ducts [5]. An unusual finding in our patient was that the ejaculatory duct obstruction and the hypoplastic testicle were contralateral to each other. In Zinner syndrome, malformations are usually on the same side, although contralateral malformations have been described in the literature [4].
The differential diagnosis should include other cystic pelvic lesions such as laterally located prostatic cysts, diverticulosis of the vas deferens, ectopic ureterocele, and abscesses.
Treatment depends on the clinical signs and may vary from simple surveillance to surgical excision (laparoscopy) using a suction puncture [6].

Zinner syndrome is a rare malformation disorder that is often asymptomatic. Imaging has resulted in this syndrome being more frequently detected during routine clinical care.