Conflicts of Interests: The authors declare there are no competing interests.
Ethical approval: Approval to publish the report has been granted by the authors’ local ethics committee. Menzies School of Health Research granted ethics approval on 8 June 2021 and waived consent from the individual participant, finding the research was LOW RISK in accordance with the National Statement on Ethical Conduct in Human Research (2007).
Patient consent: Patient consent was obtained and is documented in the patient clinical notes.
Acknowledgements: The authors are grateful and thankful for the guidance of Dr Patrick Elliott in drafting the manuscript.
This article is licensed under a Commons Attribution Non-Commercial 4.0 License

Suboptimal nutrition can lead to deficiencies in micronutrients such as ascorbic acid (vitamin C), which can present with catastrophic neurological sequelae. Deficiencies of vitamin C, vitamin B3 (niacin) and zinc levels contribute to reduced bone density. Vitamin C associated vertebral fractures, although rare in adults, are still treatable if diagnosed early with a thorough clinical and nutritional history, and early supplementation. Radiological clues suggestive of scurvy-induced vertebral fractures can be diagnosed on plain X-ray and MRI spine imaging.

Suboptimal nutrition is a common problem in both low- and high-income settings, though nutritional deficiency resulting in hospitalisation is rare. Deficiencies in micronutrients such as B and C vitamins, and trace elements including zinc and iron, can result in significant pathology. In select populations, evidence suggests the prevalence of nutritional deficiencies such as vitamin C deficiency (scurvy) is higher than recognised, ranging from 5% to 20% [1–3]. Severe nutritional deficiency is rare in Australia due to the availability of fresh fruit and vegetables, however geographical challenges in some areas contribute to limited access.
Most published cases of scurvy have reported common presentations, such as anaemia, gingival hyperplasia, purpura and abnormal hair follicle development [4–9]. Beyond periosteal haemorrhage, rarer orthopaedic complications associated with the disease have been reported. We present an interesting case of sclerotic vertebral spine lesions and an acute T11 burst fracture secondary to bone disease, related to multinutritional deficiency.

A 60-year-old male presented to an Australian tertiary hospital with a prolonged history of worsening petechial rash, impaired mobility, anaemia and renal impairment. He reported a two-month history of fatigue, unintentional weight loss, thoracic back pain and a petechial rash affecting both the upper and lower limbs with bilateral ankle swelling. Prior histology from a skin biopsy of the rash and an oral mucosal lesion were nondiagnostic.
His past medical history included previously treated laryngeal squamous cell carcinoma and a right frontal ischaemic stroke. He was a current heavy smoker with prior heavy alcohol use. He denied taking regular medications. His nutritional history revealed poor intake of meats, fruit and vegetables (namely those high in vitamin C), which he attributed to low income.
Clinical examination supported the initial suspicion of nutritional deficiency. He appeared cachectic with poor dentition, chipped nails and evidence of poor wound healing. He was haemodynamically stable (temperature 36.5 oC, pulse 59 bpm, blood pressure 130/75 mm Hg, respiratory rate 14 breaths per minute and oxygen saturation 99% on room air). Generalised muscle wasting was noted and a papular, non-tender purpuric rash on the upper torso and all four limbs, worse on the lower extremities (Fig. 1). The right ankle was swollen and tender to palpation with no restricted ankle joint movements. There was midline spinal tenderness at the T10–T11 vertebral area. Neurological examination demonstrated an antalgic gait without specific cerebellar signs. 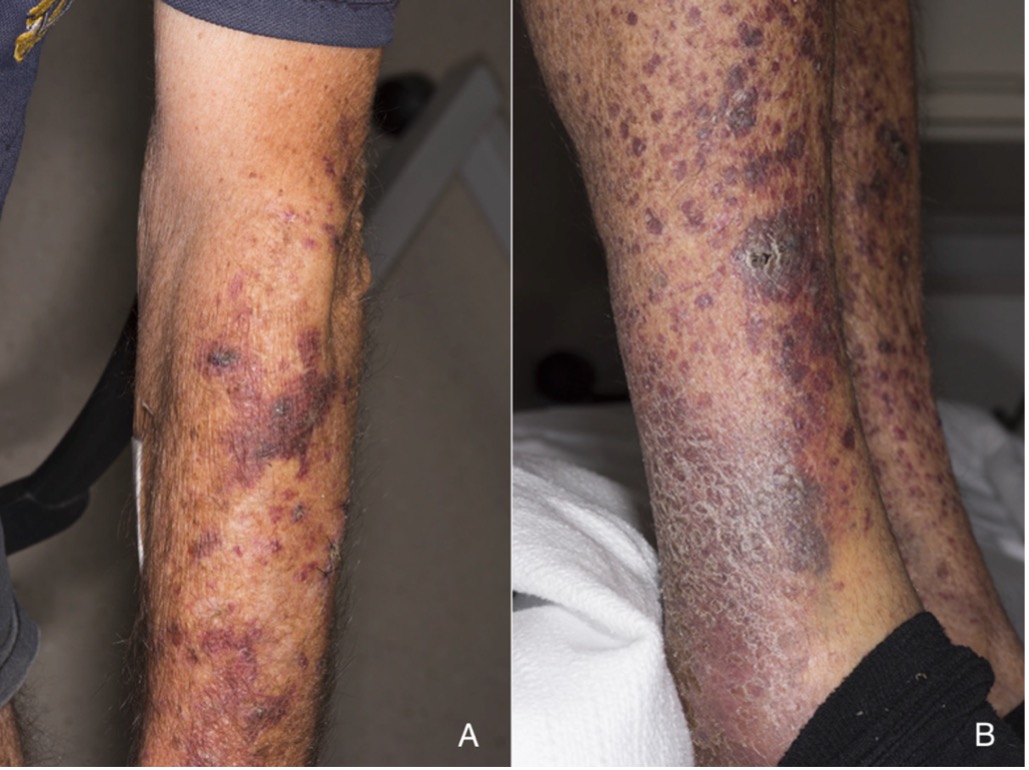 While the differential diagnosis remained broad, rapid administration of intravenous thiamine, oral multivitamins and high-dose vitamin C 500 mg oral twice daily was commenced while undergoing assessment for other causes, including malignancies (e.g. prostate cancer and multiple myeloma). Initial biochemistry found iron deficiency anaemia and an elevated erythrocyte sedimentation rate (Table 1). However, autoimmune studies, plasma serum electrophoresis, viral screens, faecal occult blood test and haemolysis screening were all negative, including C-reactive protein, vitamin B12 and folate levels. A micronutrient screen for vitamin C, vitamin B3 (niacin) and zinc levels were available approximately 4 weeks later and revealed significant deficiencies in this patient.
A subsequent biopsy was performed and reported mild superficial and dermal perivascular lymphocytic infiltrates, without evidence of vasculitic change. Immunofluorescence staining was negative for IgG, IgA, IgM and C3. Both plain film X-ray imaging and MRI spine (Fig.2) reported a T11 burst spinal fracture.
The patient was maintained on oral micronutrient supplementation for 12 weeks and encouraged to maintain abstinence from alcohol. Specific nutritional, physical and occupational programmes were provided to optimise strength and conditioning. During follow-up at four and eight weeks, the patient’s pain had improved without evidence of neurological compromise; however, the T11 fracture had caused a significant kyphotic deformity. Subsequent flexion/extension X-ray showed no signs of instability. 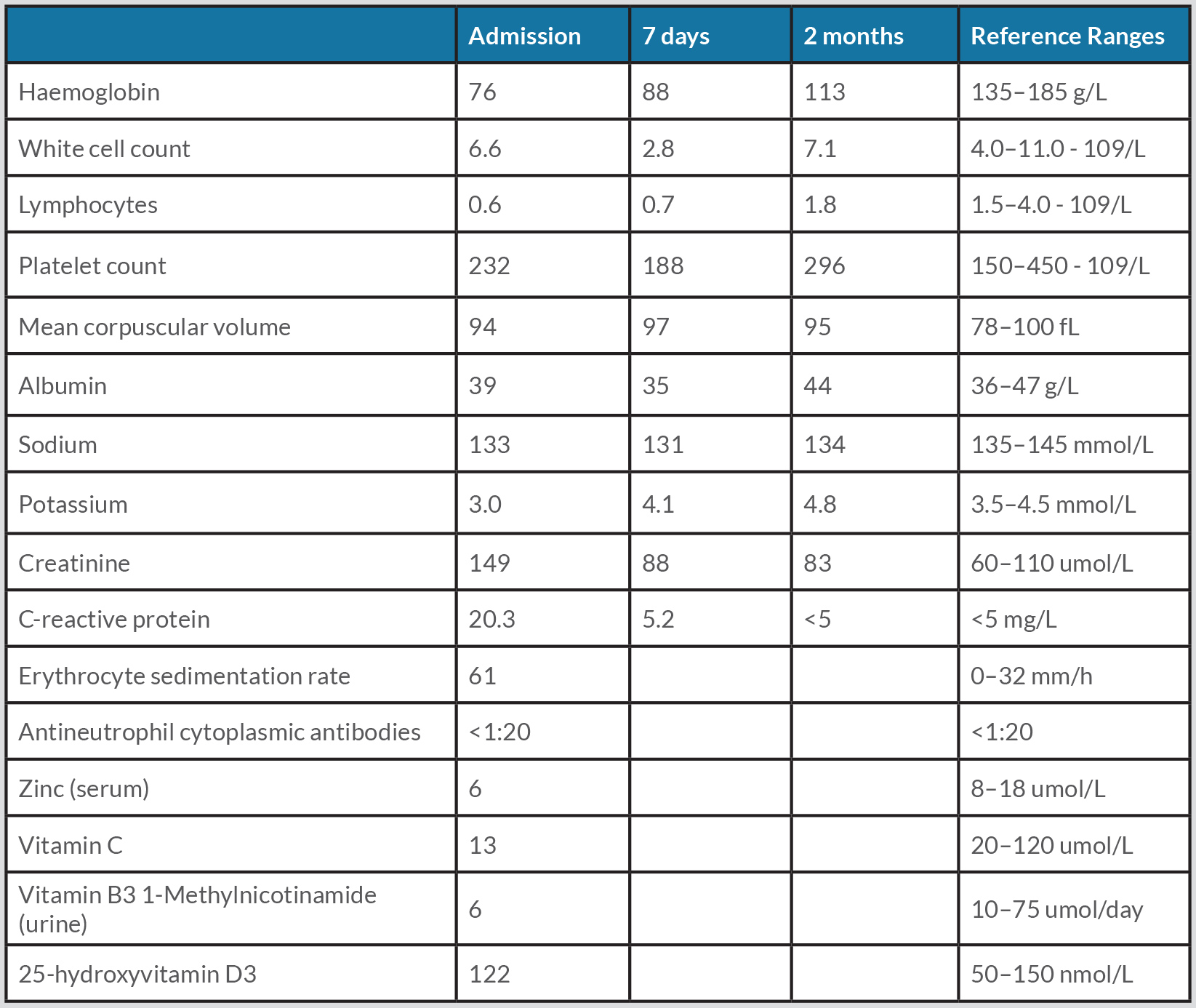 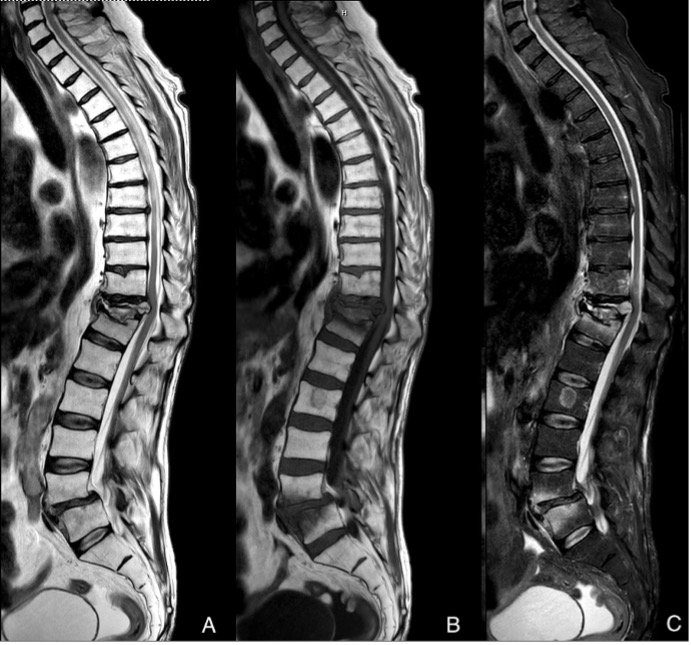 The patient was mobilised as tolerated. His severe anaemia and kidney injury was resolved with minimal intervention beyond vitamin supplementation. Furthermore, there was resolution of skin lesions and stable appearance of the T11 fracture, with improvement of both pain and mobility.

Although vitamin C deficiency has been associated with skeletal abnormalities in children, it is rarely reported in the adult population. This is likely attributed to the morphological differences in bone structure and higher metabolism needs in children compared to adults [10–12]. Scurvy principally manifests in defective collagen metabolism.
Clinical manifestations of scurvy include non-specific constitutional symptoms (fatigue, lethargy, low mood) and haemorrhagic findings (petechial haemorrhagic rash as noted in our patient, haemarthrosis and periosteal haemorrhage). Other severe complications include intracerebral haemorrhage and myocardial infarction [13–18].
Scurvy-associated vertebral fractures occur mostly in the upper lumbar spine or lower thoracic spine, reflective of the biomechanics of the transitional thoracolumbar junction [18–19]. The thoracolumbar junction undergoes significant force in motion as it transitions from the rigid thoracic spine to the flexible lumbar spine [20]. This energy required to cause a fracture in scurvy is minimal as observed in our patient. Interestingly, vertebral fractures associated with scurvy follow similar pathophysiology as seen in osteoporotic fractures. Both clinical history including nutrition and its associated symptoms are vital to diagnose scurvy-related vertebral fractures [15–16]. The onset of back pain can be spontaneous without any significant history of high impact trauma [18,19]. Severe back pain localised to the area of the fracture is the most common presentation [18,19].
Common radiological appearances of scurvy include codfish vertebra, wedge and endplate, but these are all related to structural insufficiency and are not pathognomonic for scurvy [19]. Other radiological diagnostic clues of scurvy-associated vertebral fractures include bone translucency, coarsening of bone trabeculation and/or stencilling of the vertebral bodies [18–19]. MRI of the spine demonstrating bone oedema and haemorrhage into the marrow can be attributed to scurvy [17].
As seen in our case report, vitamin C plays an important role in adult bone density and prevention of fractures [15]. Ascorbic acid serves as a cofactor in collagen formation and hydroxylation of lysine and proline, both of which are important for the maintenance of bone [4].

Historically rare nutritional deficits such as scurvy, pellagra and zinc deficiency requiring hospitalisation can present with clinically significant bone involvement as shown in this case. It is important to recognise these easily treatable nutritional deficiencies early to avoid critical neurological sequelae.