Percutaneous liver biopsy (PLB) is a common procedure in patients with liver disease. Bleeding after PLB is rare, with an incidence of 0.35%. Most bleeding complications present within 24 h after biopsy. A 56-year-old woman was admitted to our hospital due to severe and sudden right upper quadrant (RUQ) abdominal pain 10 days after ultrasound (US)-guided PLB. CT study revealed both intrahepatic and intraperitoneal bleeding, and Hb levels decreased by 3.2 g/dl within a few hours. Such a prolonged delay in PLB-related bleeding has not been previously described in the medical literature.

PLB is a common procedure in patients with liver disease. However, bleeding after PLB is rare, with incidence of 0.35%. Approximately 95% of bleeding complications present within 24 h after biopsy[1]. We describe a rare case of delayed intraperitoneal and subcapsular bleeding 10 days after biopsy, which was treated conservatively. Complication rates, patient presentation, risk factors for bleeding, and surveillance time after biopsy are discussed briefly.

A 57-year-old woman was admitted to our hospital due to severe, sudden and sharp RUQ abdominal pain. The patient had a history of primary biliary cirrhosis (PBC), systemic lupus erythematosus and lichen planus. She had undergone US-guided PLB for staging of PBC 10 days before this admission. The biopsy procedure had been uneventful, and the laboratory values on the day of biopsy were within normal limits with INR 0.99, PTT 29.9 sec and platelets 677×109/l. One passage PLB had been performed with a Hepafix (Braun) 15-gauge (1.8 mm) needle. Following the biopsy, the patient had been supervised for 4 h, was haemodynamically stable, did not report any pain, and was discharged home. The biopsy specimen revealed a non-cirrhotic liver. The patient denied having any abdominal pain or abdominal trauma in the days following biopsy. At presentation her vital signs were normal. Physical examination was normal other than RUQ abdominal tenderness. Laboratory studies revealed a haemoglobin (Hb) level of 12 g/dl, no leukocytosis or thrombocytosis, INR 1.07, PTT 26 sec, normal electrolytes and renal function, normal bilirubin levels and elevated liver enzymes with ALP 113 U/l, GGT 269 U/l, ALT 202 U/l and AST 275 U/l. Chest and abdominal x-rays were normal, and abdominal US showed a normal-sized liver with hyperechogenic areas in the right lobe suspected to be haematomas (Fig. 1). The patient underwent an abdominal and pelvic computed tomography (CT) scan which demonstrated a large haematoma in the right lobe of the liver and a large amount of intraperitoneal fluid (Fig. 2). 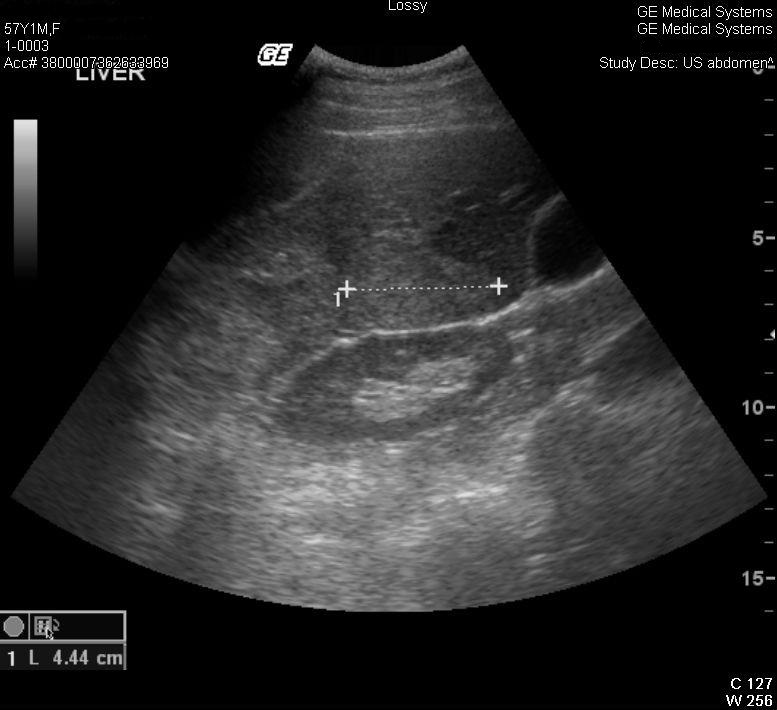 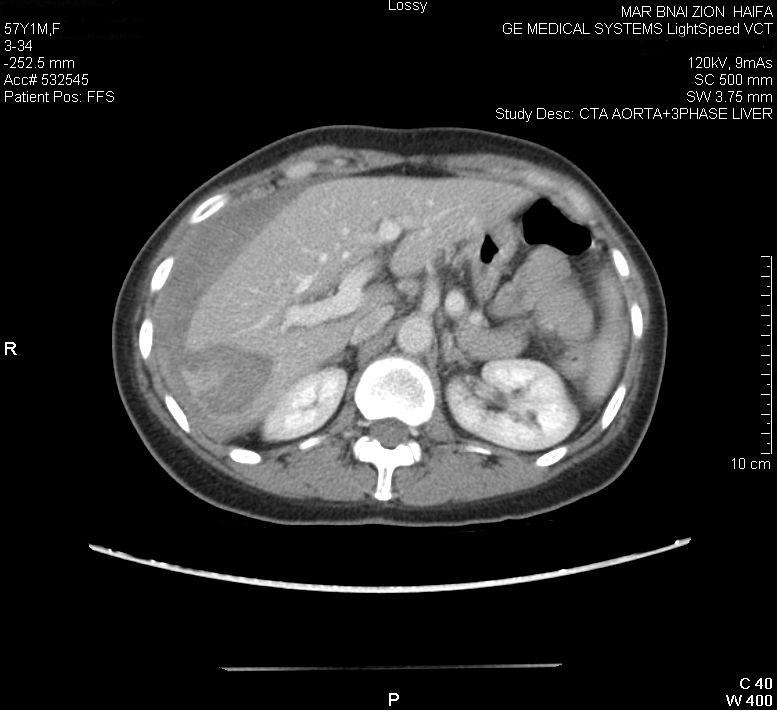 The patient was admitted and in light of haemodynamic stability was managed conservatively with frequent monitoring of vital signs and laboratory tests. Several hours after admission the Hb level decreased by 3.2 g/dl to 8.8 g/dl. The patient was transfused with two units of packed red blood cells. Following blood transfusion, Hb levels remained stable at 10.5 g/dl.
From admission to discharge the patient was haemodynamically stable and reported relief of abdominal pain. Hb levels did not decrease, serial US examinations showed the haematoma in the right lobe of the liver did not increase in size, and Doppler imaging did not show any blood flow.
The patient was discharged home on day 7 of hospitalization.

PLB is a standard procedure for patients with chronic liver disease. US-guided PLB is considered generally safe and has a very low complication rate. In a large population-based study which included 4,275 patients between the years 1994 and 2002, 32 patients (0.75%) had significant biopsy-related complications, and 15 (0.35%) patients had bleeding. In this large study, six patients (0.14%) died of complications due to bleeding, all of whom had malignancies[1].
Most of the bleeding complications occur during the first 24 h after PLB: in a nationwide survey in France, 60% of bleeding complications occurred within 2 h, 82% in the first 10 h, and 96% within 24 h after PLB2. According to the literature review we conducted, the report presented here is the most significantly delayed PLB-related bleeding case described so far.
Post-biopsy pain occurs in 30–50% of patients after PLB and indicates transient localized discomfort at the biopsy site or a small amount of blood or bile, locally stretching the liver capsule. Usually the pain is mild to moderate in contrast to the severe sharp pain described by patients with major bleeding complications. However, it may be difficult to identify patients developing a major bleeding complication using clinical judgment alone. PLB is carried out as an inpatient or outpatient procedure. In a large study of 3,214 patients comparing surveillance times after biopsy, no significant differences in major complications were observed between the groups at 1, 4 and 6 h after biopsy[3]. The American Association for the Study of Liver Diseases (AASLD) published a position paper for liver biopsy in 2009. Regarding post-biopsy surveillance, the AASLD states that ‘vital signs must be frequently monitored (at least every 15 minutes for the first hour) after liver biopsy (Class I, Level C). The recommended observation time after biopsy is between 2 to 4 hours and will vary depending on local expertise and practice (Class I, Level B)[4].
Factors associated with an increased risk of bleeding include patient risk factors such as bleeding disorders, advanced age, cirrhosis, malignancy, renal failure and ascites. Technical risk factors include high numbers of needle passages, the use of a large needle, the use of an automatic needle, an inexperienced operator and the use of a blind technique. Our patient had none of the above personal or technical risk factors. Our assumption is that the patient had minor intrahepatic bleeding which was asymptomatic and contained by the liver capsule, but on day 10 after biopsy, the liver capsule was torn abruptly and the blood previously contained in the capsule spilled into the peritoneal space, allowing additional bleeding from the damaged liver vessels to occur. An additional factor may have been premature clot dissolution due to liver disease-associated hyperfibrinolysis, which has been proposed as playing a role in some patients, especially those with delayed bleeding, although this has not been extensively studied[5]. This issue is even more complicated due to the fact that impaired haemostasis in patients with chronic liver disease is not properly reflected by conventional coagulation parameters.
In summary, we described a rare presentation of delayed bleeding after US-guided PLB. Physicians should be aware of such a presentation and instruct patients to immediately report any abdominal pain in the days following PLB.