Results: A PET-CT scan showed diffuse thickening of the thoracic aorta and confirmed the diagnosis of aortitis. Systemic corticosteroid therapy was initiated and complete remission was achieved in six months.

Conclusion: Persistent dry cough of unknown origin, especially when associated with systemic inflammation, demands a thorough differential diagnosis and should not be underrated.

Aortitis is a generic term to define inflammation of the aortic wall. The most common causes are the large-vessel vasculitides giant-cell arteritis (GCA) and Takayasu arteritis, though in surgical records, aortitis has been found to be isolated in up to 70% of cases[1]. Aortitis may present with a variety of symptoms and signs (fever, systemic inflammation, chest or abdominal pain) and evolve into life-threatening complications, such as aortic inflammatory aneurysm, dissection and rupture[1]. Idiopathic thoracic aortitis occurs most commonly in older women and is often asymptomatic; incidental diagnosis after surgery is common[2]. Although isolated aortitis is known to have a good prognosis even without treatment, high-dose corticosteroids should be started promptly in order to prevent the development of life-threatening complications[2]. Here, we present the case of a man with aortitis, presenting with chronic dry cough.

A 72-year-old man was admitted to the Internal Medicine department because of chronic cough, weight loss and worsening fatigue. The patient had been in his usual state until 12 months prior to admission, when both diurnal and nocturnal dry cough developed. He was a former smoker and his medical history included hypertension and dyslipidemia for which he was taking amlodipine, hydrochlorothiazide, atorvastatin, and acetylsalicylic acid. At the onset of symptoms, the general practitioner prescribed only symptomatic drugs, without any improvement. During the ensuing year, the patient underwent several outpatient visits. The otolaryngologist prescribed pantoprazole twice daily for four weeks for suspected gastroesophageal reflux disease (GERD), but esophagogastroduodenoscopy (EGD) and 24-hour esophageal impedance-pH monitoring were negative, while the cough persisted. Lung examination and pulmonary function tests revealed chronic bronchitis with mild and inconstant obstructive component (COPD). Skin prick tests were negative for the main allergens. Salmeterol twice daily was prescribed, though there was still no improvement. Echocardiography was reportedly normal. Two months before admission, laboratory tests showed a mild normocytic anemia (Hb 10.9 g/dL) and a slightly elevated C-reactive protein (1.7 mg/dL). The patient was admitted to our department for further evaluation. Apart from dry cough, he reported a recent 10 kg weight loss and worsening fatigue. On examination, he was afebrile; blood pressure, heart rate and oxygen saturation while breathing room air were within the normal range. Cardio-pulmonary, abdominal and neurological examinations were unremarkable and there was no superficial palpable lymphadenopathy. Routine blood tests, tumor blood markers and serological tests for autoimmunity and infection (i.e. cytomegalovirus, Epstein-Barr virus, antinuclear antibodies and extractable nuclear antibodies) were normal, except for Hb 10.7 gr/dL, ESR 98 mm/h, CRP 2.1 mg/dL, fibrinogen 560 mg/dL and ferritin 236 ng/ml. A bronchoscopy with bronchoalveolar lavage for common bacteria and Mycobacterium Tuberculosis was also negative for malignancy. A computed tomography (CT) scan of the chest and the abdomen was performed under the working hypothesis of cancer. The main remarkable finding was a slight diffuse thickening of the walls of the thoracic aorta with ectasia of the ascending portion. Given the systemic inflammation and the CT findings, we considered a large-vessel arteritis. The positron emission tomography (PET)-CT scan confirmed our final hypothesis with the presence of high periaortic [18F] Fluorodeoxyglucose ([18F]FDG) uptake along the ascending portion of the aortic arch, a finding consistent with active aortitis (Fig. 1, A-D). Since the patient did not fulfill the ACR Criteria for Giant-Cell Arteritis (GCA) and there were no results suggestive of other autoimmune diseases, a diagnosis of isolated aortitis was made. 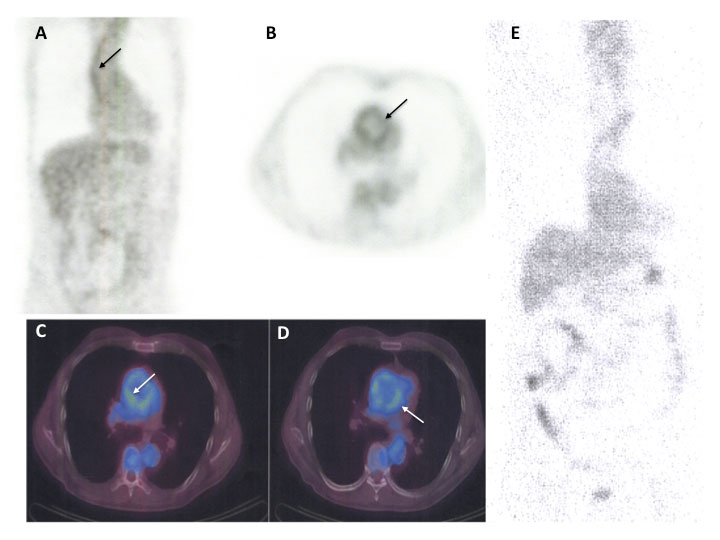 High-dose oral methylprednisolone (1 mg/kg/day) was prescribed and the patient was discharged home. Two months later, on follow-up examination, ESR and CRP were within the normal range and the patient’s dry cough and fatigue had resolved. After six months of high-dose corticosteroid therapy, a control PET-CT scan did not show any abnormal [18F] FDG uptake in the aortic wall (Fig. 1, E). Therapy with corticosteroids was, therefore, gradually tapered and at the last follow-up, two years after admission, the disease was still in complete remission.

Isolated or idiopathic aortitis of the thoracic aorta is a condition that occurs most commonly in older women with an estimated prevalence of 4.3-8.4%[2], although it is likely underdiagnosed since the presentation may be frequently clinically silent or with few misleading symptoms such as fever, chronic back pain or, very rarely, persistent dry cough[3].
In this report, we described the case of a 72-year-old man presenting with a twelve-month history of dry cough, worsening fatigue, weight loss and elevated systemic inflammatory markers. Chronic cough is an easily underrated symptom since it is encountered in several diseases. Differential diagnosis of chronic cough is broad and includes postnasal drip (PND), allergy, asthma and gastroesophageal reflux disease (GERD), which together account for the 86% of all the causes in adult patients[4]. Lung (COPD, lung carcinoma, TBC, sarcoidosis), upper airways (subglottic stenosis, tracheomalacia) and cardiologic (congestive heart failure) diseases are less common, but need to be investigated. Since the workup before admission, which focused on pulmonary, cardiovascular and gastroenterological causes, was negative, the persistent cough represented the clue for a different diagnosis.
Isolated aortitis was, therefore, diagnosed by proper exams. In particular, PET-CT scan has shown to be pivotal in the diagnosis and the follow-up of patients with suspected large-vessel arteritis[5].
Isolated aortitis is usually included in the spectrum of large-vessel vasculitides and should be treated according to the current guidelines[6]. In our case, high-dose corticosteroids with gradual tapering led the disease to clinical, laboratory and radiological remission in six months (Fig. 1, E). Although isolated aortitis is known to have a better prognosis than GPA and Takayasu arteritis, a prompt therapy may reduce the risk of developing serious complications, such as inflammatory aneurism and aortic rupture.

The differential diagnosis of persistent dry cough of unknown origin, especially when associated with systemic inflammation, should always include an aortic involvement.