Patient consent: Patient consent has been obtained.
Conflicts of Interests: The authors declare there are no competing interests.
This article is licensed under a Commons Attribution Non-Commercial 4.0 License

A 71-year-old female presented with 5 days of diarrhoea and asthenia. Past medical history of rheumatoid arthritis, arterial hypertension, hypertrophic cardiomyopathy and chronic gastritis was treated with leflunomide, deflazacort, esomeprazole, carvedilol and spironolactone. At admission, the patient’s physical examination showed signs of dehydration. Lab results revealed leucocytosis, increased C-reactive protein, hypomagnesaemia, hypocalcaemia and hypokalaemia. A presumption of acute infectious diarrhoea causing hypomagnesaemia with hypocalcaemia and hypokalaemia was made. She was started on ciprofloxacin, IV hydration and electrolyte supplementation with an adequate response. However, magnesium levels fell repeatedly. After excluding other causes for hypomagnesaemia, chronic use of proton pump inhibitors (PPIs) was considered a plausible cause therefore PPI was discontinued, with normalisation of magnesium levels.
Hypomagnesaemia is a common disturbance, mainly caused by diarrhoea, gastrointestinal malabsorption, medications, alcoholism and volume expansion. Clinical manifestations include neuromuscular symptoms, cardiovascular manifestations, hypokalaemia and changes in calcium metabolism. PPI-related hypomagnesaemia has been described in later years particularly in chronic use cases, with a medium prevalence of 27%, but further studies remain necessary to clarify its pathophysiologic mechanism. Since PPIs are widely used, it is essential to be aware of hypomagnesaemia as a possible side effect, particularly in refractory cases and after excluding other common causes.

A 71-year-old woman presented to the Emergency Department with 5 days of asthenia and watery diarrhoea, in the absence of other symptoms.
Her past medical history included rheumatoid arthritis, arterial hypertension, hypertrophic cardiomyopathy, hiatus hernia with peptic oesophagitis and chronic gastritis. She was chronically treated with leflunomide 10 mg OD, deflazacort 6 mg OD, esomeprazole 40 mg OD, carvedilol 25 mg b.d and spironolactone 12.5 mg OD.
At presentation she was haemodynamically stable and apyretic, with decreased skin turgor and dry mucosa. There were also signs of degenerative joint disease without arthritis. The remainder of the physical examination was unremarkable.
Laboratory results showed leukocytosis with neutrophilia, with increased C-reactive protein and procalcitonin. Severe hypomagnesaemia, hypocalcaemia and slight hypokalaemia were also present, with normal levels of parathyroid hormone (PTH) and vitamin D (Table 1).
She was admitted to the Internal Medicine Department with an initial diagnosis of acute infectious diarrhoea, causing hypomagnesaemia presumably due to gastrointestinal losses, with secondary hypocalcaemia and hypokalaemia, and was started on intravenous ciprofloxacin 400 mg b.d, intravenous fluids and electrolyte supplementation.
On day three of treatment, there was a significant clinical and analytical improvement. However, during the following days, magnesium levels kept decreasing despite being under oral supplementation and required repeated intravenous infusions to maintain normal magnesium values.
Six days after diarrhoea subsided and with magnesium supplementation, a different aetiology for her hypomagnesaemia had to be determined and several examinations were performed accordingly, which were unremarkable. Therefore, chronic use of PPIs was acknowledged as a plausible cause. After esomeprazole replacement with cimetidine, the patient showed analytical improvement and sustained response (Fig. 1).
PPI-related hypomagnesaemia was admitted as the most likely cause for the persistence of this electrolyte imbalance, in the absence of other causes. The patient was discharged after 16 days and during the outpatient follow-up, her magnesium levels remained normal. 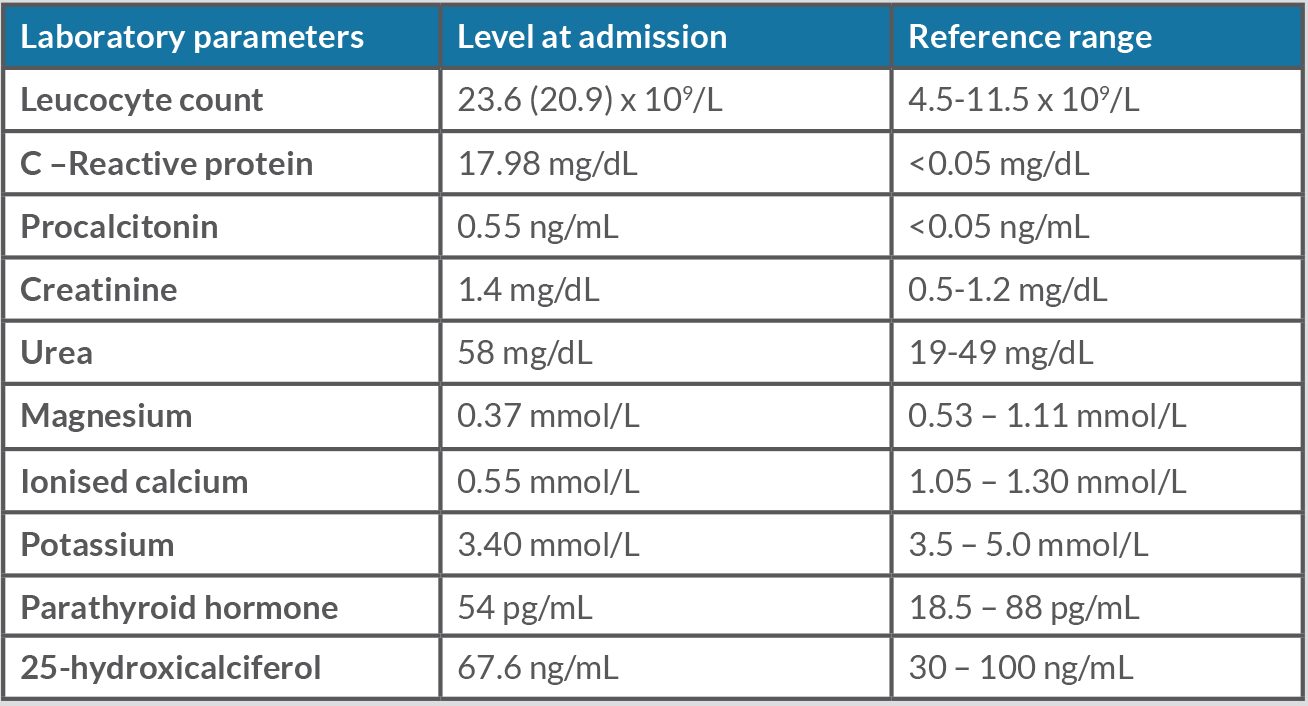 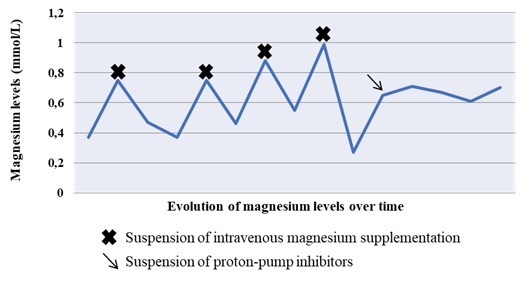 Magnesium is the second most abundant intracellular cation, and its regulation is mediated by intake, intestinal absorption and renal excretion [1,2]. There are two main pathways responsible for absorption: paracellular absorption regulated by tight junction-associated claudin proteins and transcellular absorption facilitated by transient receptor potential melastatin 6 and 7 channels (TRPM6 and TRPM7), and basocellular cyclin M4 (CNNM4) Mg2+ channels [1,3].
PPIs are a mainstay treatment for gastric acid-related diseases and are extensively used worldwide [2,4]. Several concerns about the long-term use of PPIs have been emerging, with hypomagnesaemia being reported in the later years. Some studies have been showing controversial results [2,4,5].
A medium prevalence of hypomagnesaemia of 19–27% has been reported among PPI users [2,4], as well as an increased odd risk of hypomagnesaemia among PPI users (pooled odds ratio of 1.5 [95% confidence interval, 1.1–2.0]) after adjustment for possible confounders such as the use of diuretics, particularly in chronic use cases [5]. In addition, higher doses of PPIs showed a stronger correlation with the development of hypomagnesaemia [4]. Several factors are being identified as enhancers of PPI-related hypomagnesaemia such as female sex, increasing age, concomitant use of drugs that impair tubular function and chronic kidney disease [2]. The pathophysiologic mechanism of hypomagnesaemia among PPI users is still unclear, but there seems to exist a decrease in intestinal luminal pH that alters TRPM6/TRPM7 channel affinity for magnesium and disrupts the active transport system [1,3]. In a study with Sprague Dawley rats, the suppression of magnesium absorption appeared to be higher in the duodenum (81.86%) and jejunum (70.59%) and decreased along the intestinal tract [3]. No difference between PPI types and hypomagnesaemia was observed, supporting the class effect concept [2].
Since PPIs are widely used, it is essential to be aware of hypomagnesaemia as a possible side effect, particularly in intractable cases and after excluding other causes. The authors advise evaluation of magnesium levels in chronic PPI users with other risk factors for hypomagnesaemia or whenever compatible symptoms of hypomagnesaemia are present. It should be revised in every PPI user if there is a formal indication for its use, since there are emerging concerns related to long-term use. Additional studies are needed to support the relationship between PPIs and hypomagnesaemia and clarify the possible pathophysiologic mechanism involved.