How to cite this article: Barras M, Uhlmann M. Spontaneous pneumomediastinum and bilateral pneumothoraces in a patient with bleomycin-induced pneumonits. EJCRIM 2017;4 doi:10.12890/2017_000727

Bleomycin lung toxicity is well established and can manifest as bleomycin-induced pneumonitis, but pneumomediastinum and pneumothorax are very rare complications. We report the case of a 73-year-old woman, recently treated with bleomycin for Hodgkin's disease, who was admitted for bleomycin-induced pneumonitis. Two weeks later she had a pneumomediastinum with extensive subcutaneous emphysema and small bilateral pneumothoraces. Three months after that she was readmitted for dyspnoea. The CT scan showed complete regression of the pneumomediastinum but extensive bilateral ground-glass infiltrates. The patient died from respiratory failure 2 weeks later.

A 73-year-old woman who had never smoked and had been recently diagnosed with Hodgkin's lymphoma stage IIIB, was treated with two cycles of ABVD (adriamycin, bleomycin, vinblastine and dacarbazine) with a total dose of bleomycin of 200×103 units for 57 kg. The PET-CT scan after two cycles showed complete radiological and metabolic remission. However, a few days before the third cycle of chemotherapy, the patient developed rapidly progressive dyspnoea and a dry cough limiting her physical activity, together with mild hypoxaemia and bilateral lung crackles. A CT scan of the chest showed airspace consolidation, linear opacities, septal thickening especially at the bases, and traction bronchiectasis (>Fig. 1). We diagnosed bleomycin-induced pneumonitis (BIP) because of the temporal relationship between the lung fibrosis and the treatment, and because of the absence of a differential diagnosis. We therefore stopped bleomycin and started systemic corticosteroids (1 mg/kg of body weight). Two weeks later, the patient complained of facial and neck swelling, dyspnoea and rhinolalia.
There was no history of emesis, trauma or strenuous physical activity. Oxygen saturation was 90% by pulse oximetry (SpO2) on room air. A chest CT scan showed, in addition to the above findings, a pneumomediastinum, small bilateral pneumothoraces and subcutaneous emphysema (Fig. 2). The patient was admitted for close observation and supplemental oxygen, aiming for SpO2 of 92–94%. Cough and constipation were treated proactively to minimize subsequent Valsalva manoeuvres. A Gastrografin transit time x-ray, bronchoscopy and gastroscopy were performed but did not reveal the source of the mediastinal air leak. Bronchoalveolar lavage showed a mixed alveolitis with mild eosinophilia and ruled out pneumocystis pneumonia. The patient was discharged home after 1 month in hospital. A follow-up CT scan 2 months after the initial admission showed subtotal resolution of the pneumomediastinum. One month later, the patient was readmitted for dyspnoea. The CT scan showed complete regression of the pneumomediastinum but extensive bilateral ground-glass infiltrates. The patient's respiratory condition rapidly worsened and she died from respiratory failure 2 weeks later. Retrospective review of a pre-ABVD CT scan showed discrete pre-existing subpleural lung infiltrates, possibly caused by lymphoma or pre-existing interstitial lung disease. 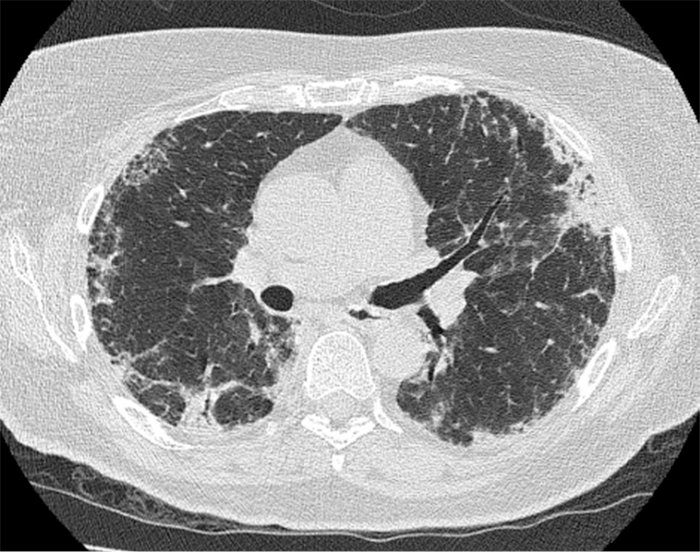 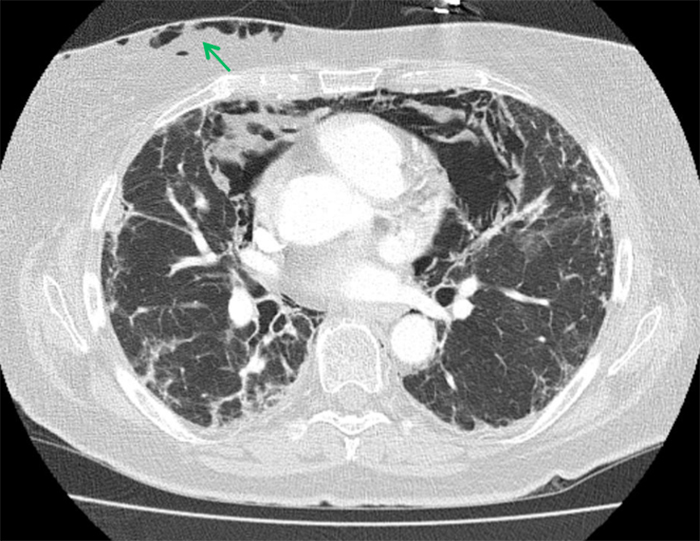 Methods and procedures
We searched PubMed using the keywords 'bleomycin', 'pulmonary interstitial disease', 'pneumomediastinum', 'pneumothorax' and 'treatment'. Our search retrieved 10 articles, all of which were case reports published from 1985 to 2017, and described 10 adult male patients and 1 male child. Four of the patients had pneumomediastinum and pneumothorax, five had pneumomediastinum only and two pneumothorax only. Nine were treated with steroids and five with antibiotics. Three patients completely recovered in 1–7 months, seven died after a few days of respiratory distress, and two died from septic shock after 7 and 30 days[1-10].

After the diagnosis was made, we stopped bleomycin treatment and started systemic corticosteroid therapy (1 mg/kg of body weight). The cytotoxic agent bleomycin can sometimes induce potentially fatal pulmonary toxicity, also known as BIP. BIP starts with an inflammatory reaction modifying the lung architecture and leading to pulmonary fibrosis. Besides bleomycin discontinuation, there is no effective treatment for BIP in humans, although systemic corticosteroids are widely prescribed[11]. We treated our patient with limited oxygen supplementation, aiming for SpO2 of 92–94%. Data obtained from animal studies suggest oxygen supplementation should not be given during bleomycin therapy as high oxygen concentrations encourage free radical production, which may increase bleomycin lung toxicity[12-13].
We prescribed codeine and laxatives to avoid spontaneous cough and constipation (Valsalva manoeuvres). Spontaneous pneumomediastinum (SPM) is defined as radiologically detected free air in the mediastinum, without preceding trauma[14]. It is mostly seen after intrathoracic pressure shifts leading to alveolar rupture and dissection[15]. Pneumomediastinum in patients with pulmonary fibrosis is thought to be the result of rupture of alveoli or honeycomb cysts[12,15]. Sahni et al. published a review that included 201 patients with SPM[12].
The most frequent triggering events were emesis, strenuous physical activity and cough. SPM is usually managed conservatively (analgesics, rest, oxygen therapy, bronchodilators and occasionally antibiotic treatment) and follows a benign course[12]. Our patient did not receive antibiotics as she never showed any symptoms or signs of infection.
A retrospective review of a pre-ABVD CT scan showed pre-existing interstitial lung disease (discrete subpleural lung infiltrates) and moderately reduced CO diffusion. The pre-ABVD spirometry was normal. The origin of the interstitial lung disease has not been determined, and may have affected lung pathology.
Retrospectively, based on the pre-treatment abnormalities, the case could have been handled differently. There is no absolute contraindication but perhaps the bleomycin dosage should have been discussed.
This case report raises various points. First, before bleomycin treatment is started, respiratory investigations are mandatory. If any abnormality is detected, closer follow-up of the patient during treatment must be established. Second, supplemental oxygen is discouraged for BIP but indicated for conservative management of pneumothoraces, making oxygen management difficult in this situation. Third, despite numerous investigations (including CT scans, a Gastrografin transit time x-ray, gastroscopy and bronchoalveolar lavage), we never found a source of mediastinal air leak, which highlights the difficulty of managing these BIP-related complications.