Groove pancreatitis (GP) is a very infrequent subtype of chronic pancreatitis affecting the pancreatic-duodenal junction. It usually manifests in middle-aged men with a history of chronic alcoholism, though it has also been described in women and in individuals who do not consume alcohol[1]. Even though the underlying etiology is unclear, chronic alcohol consumption is known to increase the viscosity of the pancreatic juice and exacerbate the inflammatory process[2]. We present a case of GP that posed diagnostic difficulties because it manifested as ascites and duodenal thickening, with pancreatic imaging findings initially normal.

A 47-year-old male attended the emergency department due to postprandial epigastric pain for a number of weeks and loss of 10 kg in body weight over the previous year. He consumed about 80 g of alcohol each weekend, and until the previous year had smoked one pack of cigarettes daily for over 10 years. The initial blood tests in the emergency department showed C-reactive protein 98.75 mg/dL, amylase 1643 U/L and normal CA 19-9 concentrations.
The initial abdominal ultrasound, computed tomography (CT) and magnetic resonance imaging (MRI) studies revealed a morphologically normal pancreas, though with jejunal thickening and abundant ascites (Fig. 1). The peritoneal fluid (Fig. 2) had the characteristics of an exudate (brown color, proteins 3.40 g/dL, albumin 1.97 g/dL, glucose 51 mg/dL, with 191 leukocytes μL, of which 98.4% were neutrophils), proved negative for malignant cells, and presented an amylase concentration of 31,800 U/L. Gastroscopy revealed a stenotic area with infiltration in the second portion of the duodenum (Fig. 3). The biopsy study indicated nonspecific duodenitis without evidence of malignant infiltration.
Following partial drainage of the ascitic fluid, repeat abdominal CT revealed the presence of four cysts in the pancreatic-duodenal groove and two in the body of the pancreas, together with several collections consistent with pseudocysts (Fig. 4). The second portion of the duodenum showed wall thickening with imprinting of the aforementioned cysts. Echoendoscopy revealed a destructured area in the region of the pancreatic groove; fine needle aspiration biopsy proved negative for malignant cells and with the identification of a nonspecific inflammatory infiltrate.
GP was diagnosed and parenteral nutrition prescribed, as well as octreotide and analgesia. The patient slowly recovered with resolution of the collections. 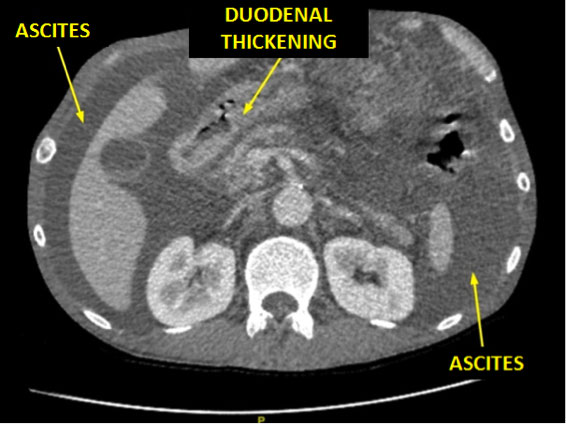 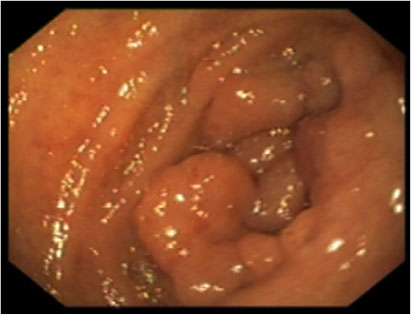 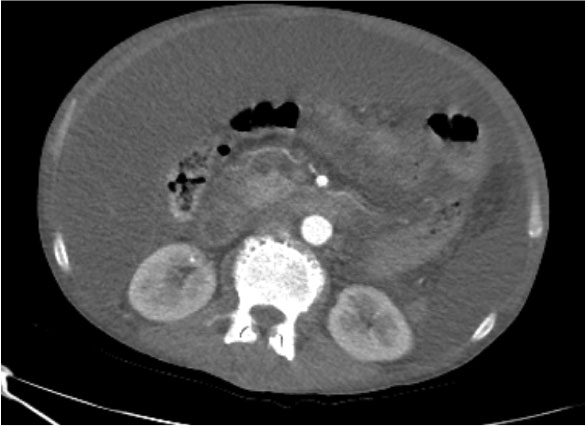 Figure 3. Gastroscopy: imprinting causing some luminal stenosis in the second portion of the duodenum
Figure 4. Arterial phase CT scan with contrast. Note the presence of multiple small images in the region of the head and uncinate process of the pancreas, consistent with cysts

Groove pancreatitis typically manifests as upper hemiabdominal pain, postprandial vomiting and weight loss[3]. It can also be associated with diarrhea, diabetes mellitus or fluctuating jaundice. The disease exhibits a chronic course, lasting between weeks and over 1 year[1]. It is common to detect hepatic and pancreatic enzyme elevations (amylase, lipase and elastase-1) in some cases with tumor marker anomalies (eg CA 19-9)[4]. It has been suggested that in some cases no frequent lipase elevations are observed, which constitutes a laboratory test parameter that helps distinguish GP from other etiologies[5]. The imaging studies usually reveal duodenal wall thickening with intramural cysts in the region of the pancreatic-duodenal groove that obliterate the lumen of the affected segment[1]. If endoscopic retrograde cholangiopancreatography (ERCP) proves feasible (ie in the absence of duodenal stenosis, and with visualization of the choledochus), the distal choledochus can exhibit smooth and concentric narrowing[1].
Imprinting upon the duodenum can obliterate the lumen and simulate a neoformation. In view of the prognostic implications, in these situations it is essential to establish a differential diagnosis also with carcinoma of the head of the pancreas[1]. This often implies surgical treatment and histopathological study of the piece in order to rule out neoplastic disease[4]. ERCP can contribute to the diagnosis by evidencing smooth and concentric narrowing of the distal choledochus, while pancreatic cancer is characterized by irregular and abrupt thickening[1]. The echoendoscopy and biopsy findings are characteristically negative for malignancy. Presentation of the disease in the form of ascitic fluid with amylase elevation is exceptional, but makes it necessary to include GP in the differential diagnosis of ascites of uncertain origin.
In sum, GP is very infrequent, is associated with alcohol abuse, and tends to manifest in males in the fourth and fifth decades of life. The disease must be included in the differential diagnosis of adenocarcinoma of the head of the pancreas, duodenal neoplasms and exceptionally large ascites.