Background: Glioblastoma multiforme (GBM) is a highly malignant glial tumour classified by the World Health Organization (WHO) as a stage IV astrocytoma. It varies in shape and size and can be cystic, vascular and necrotic. It often appears as a ring-enhancing lesion on magnetic resonance imaging (MRI). The most common symptoms of GBM, such as headache, vomiting and seizures, are due to increased intracranial pressure. The objective of this case report is to describe an atypical presentation of GBM.
Case Report: A 53-year-old woman of Italian origin presented with a 2-week history of lack of coordination in her hands and some difficulty in speech. Electromyography for assessment of her arms and cranial bulbar function was normal. However, 2 days later, the patient presented to the emergency department with progressive weakness in her left arm and leg as well as difficulty in speech. Mild left facial asymmetry was noted. A brain MRI revealed a right frontal mass. Stereotactic surgical resection was performed 2 days later, and biopsy confirmed the diagnosis of GBM. Although headache and other features of raised intracranial pressure are the most common initial symptoms of GBM, any atypical neurological or psychiatric presentation in an adult patient should raise suspicion for this tumour.
Conclusion: Careful analysis of an adult with atypical signs and symptoms along with thorough review of radiological tests will facilitate early diagnosis of dangerous tumours such as GBM. 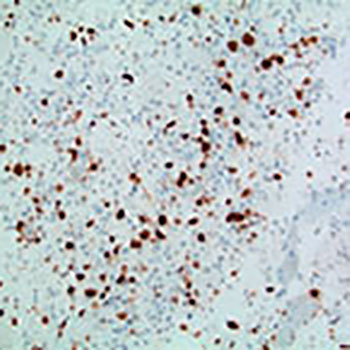