Mucormycosis is a life-threatening fungal infection whose incidence has been rising recently, mainly due to the increasing use of immunosuppressive and corticosteroid treatment. In previous decades, mucormycosis was associated with a very poor prognosis as mortality was approximately 100%. Mortality rates reported in recent literature have only slightly improved despite the availability of targeted therapy with amphotericin B. Pulmonary mucormycosis is characteristically encountered in severely immunocompromised hosts, while rhino-orbital disease is often seen in individuals with diabetes mellitus. We report a rare case of fulminant pulmonary mucormycosis as an exceptionally rare complication of corticosteroid treatment in a 76-year-old patient with chronic obstructive pulmonary disease (COPD) and diabetes. The patient had presented with typical symptoms of an infective COPD exacerbation. The interesting aspects of our case were the absence of malignancy or immunosuppression, the isolation of Rhizomucor species, and the fungal invasion of the pleura and pericardium. Unfortunately, our patient died on the 49th day of hospitalisation, despite appropriate treatment. 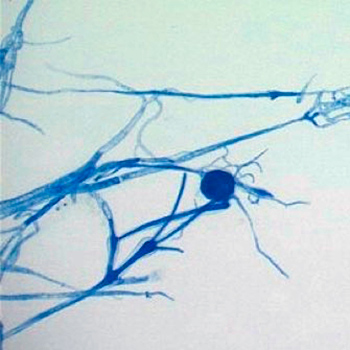